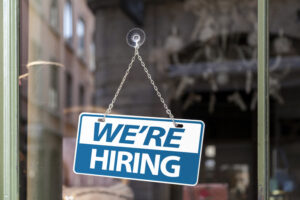 What attracts technicians to auto repair, why do they stay, and what makes them leave? Those questions and more were examined in detail by two presenters from CDK Global in a one-hour Automotive News webinar Tuesday designed to help shops find and keep skilled workers.

Kahn outlined the scope of the issue, citing TechForce Foundation data showing that more than 136,000 new technicians, including 17,500 collision technicians, will be needed in the US over the coming year. A December 2021 CDK survey of owners and managers, he added, found that their most critical need was also the hardest job to fill: service technician. 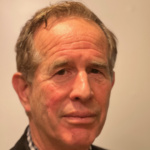 “I guess, in a way, I’m kind of talking about the need, and I’m making it more painful for y’all. It’s why you jumped in here, and you want the answers,” he said. “But I just want to make sure you understand that the challenge is big.”

According to a survey of all workers, not just in the automotive field, by McKinsey and Company, there are three primary reasons why people leave their jobs: It’s easier than ever for them to find another job; they’re upset about their current job; and they see no opportunity to advance their career.

In that same December 2021 survey, 29% of owners and managers listed employee burnout as their greatest challenge, putting it fifth on the list. “What causes that? Folks are just asking the service tech group or the retail group to just keep pushing, keep pushing, keep pushing through all of the challenges they’ve had over the last few years. That could be part of it,” Kahn said.

“That’s something I want you all to think about — I don’t want to say give your folks a hug, but, you know, show that you care.”

Saylor presented results of CDK’s surveys of service technicians, which she later said apply equally to collision repair technicians. She offered one hopeful piece of data: Of 400 potential candidates, fully 85% said they would consider a career as a technician. 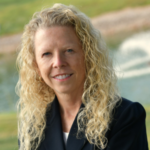 Candidates listed benefits as the top reason for their interest, followed by their interest in building and fixing things; job stability; the fact that someone in their family worked as a technician; and their dislike of office work.

CDK also surveyed dealerships on how they advertised their job openings, and which avenues were most effective. While online postings, employee referrals, and social media were the three most commonly used channels, the business’s career site and job boards were the most effective, Saylor said. 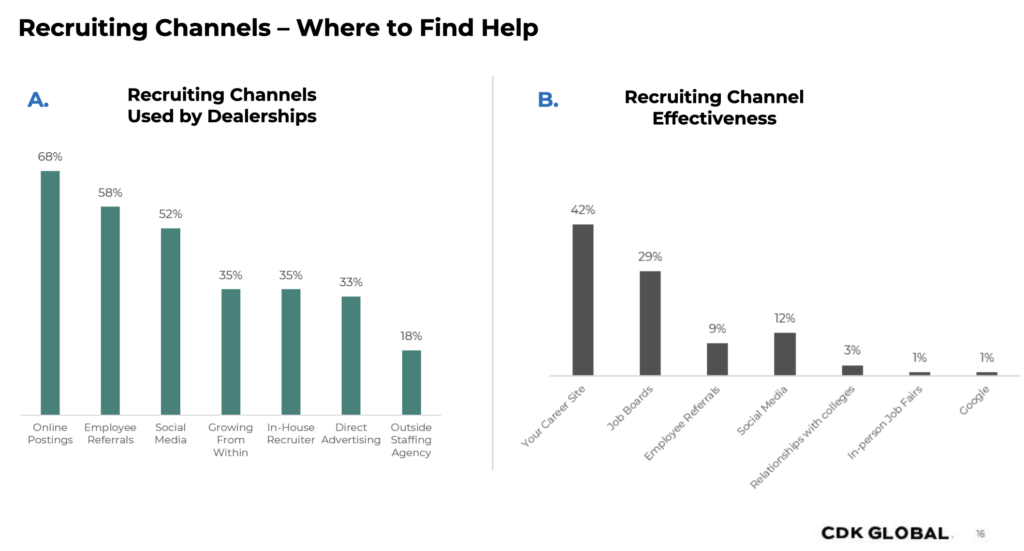 “Be sure that you’re tracking not only what channels you’re utilizing, you know, the money that you’re spending there, but the success that you’re having from this channel is just like you would do with marketing your business,” she said.

To build a strong “bench” of candidates, shops should begin by doing what they can to change perceptions about the industry. “It’s no longer strictly a mechanical role. It’s much higher, requiring much more skill, and a much more technical position than it has been before.

“Really, you should market this role of a technician as a position in the STEM field – science, technology, engineering, and math – which is an area that has just seen extreme growth lately. The computers and the software that make up a vehicle absolutely put the technician role into a science and technology category of skill.”

Saylor encouraged employers to provide a defined career path for new recruits, with clearly defined steps along that path. “They want to know that there’s room for improvement, room for growth,” she said.

Another potential pool of technicians, she said, are those who quit during the “great resignation” of the pandemic. According to a US job market report, 26% of those who quit regret their decision, and 41% of those said they would consider going back to their former employers. 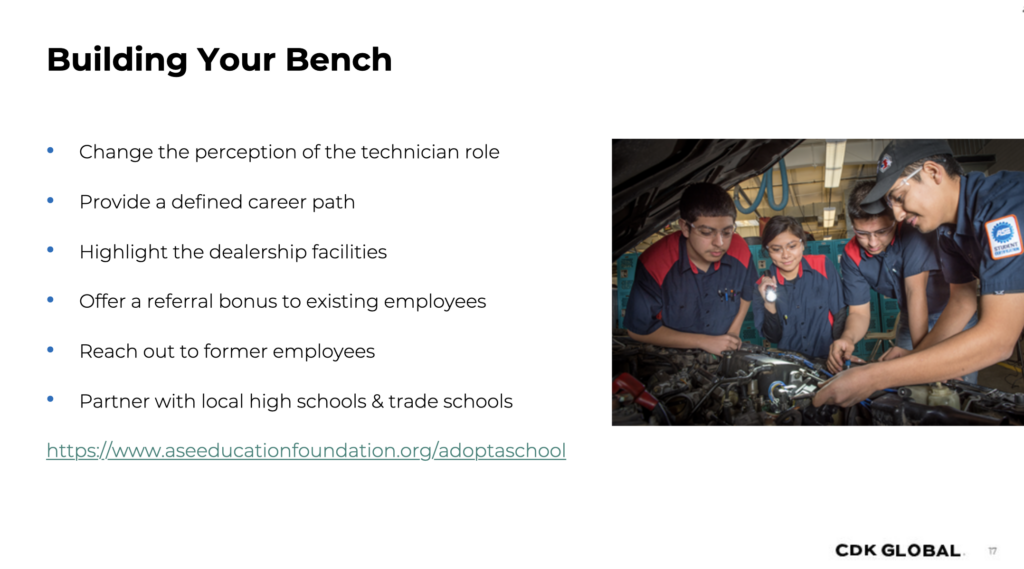 Finally, she encouraged businesses to partner with their local high schools and vocational schools. “Attend career day, provide scholarship opportunities or tuition reimbursement,” she said. “It’s really a win-win, because it enables dealerships to provide support to those local schools and build that relationship, while at the same time the schools can provide dealerships with up-and-coming automotive professionals that are about to enter the workforce.”

While her remarks were specifically addressed to dealerships’ fixed operations, they would seem to have value for independent collision repair shops as well.

Saylor also encouraged shops to do all they can do to encourage women to consider careers as technicians. While women represent half of the total workforce in the US, they represent less than 10% of the automotive maintenance and repair business. “And even worse, only 2% of all technicians are women,” she said. “So there’s a huge untapped market out there.”

Making sure that marketing materials represent worker diversity, and having good diversity inclusion policies, are steps that can help, she said. “You may even have to make changes to your facilities to accommodate everyone, such as bathrooms or locker rooms.”

Marketing technician jobs as part of the STEM field “could really resonate with women, and get them to consider being a technician and looking at this career very differently,” she said.

According to CDK data, 79% of technicians have considered leaving the industry. While that’s “a scary number,” Saylor said, 78% said they are satisfied or extremely satisfied with their job. “That’s great for you to know about your current employees,” she said.

The primary drivers of job satisfaction were enjoyment of the work, a good salary, a good work-life balance, good working conditions, and job security, Saylor said. 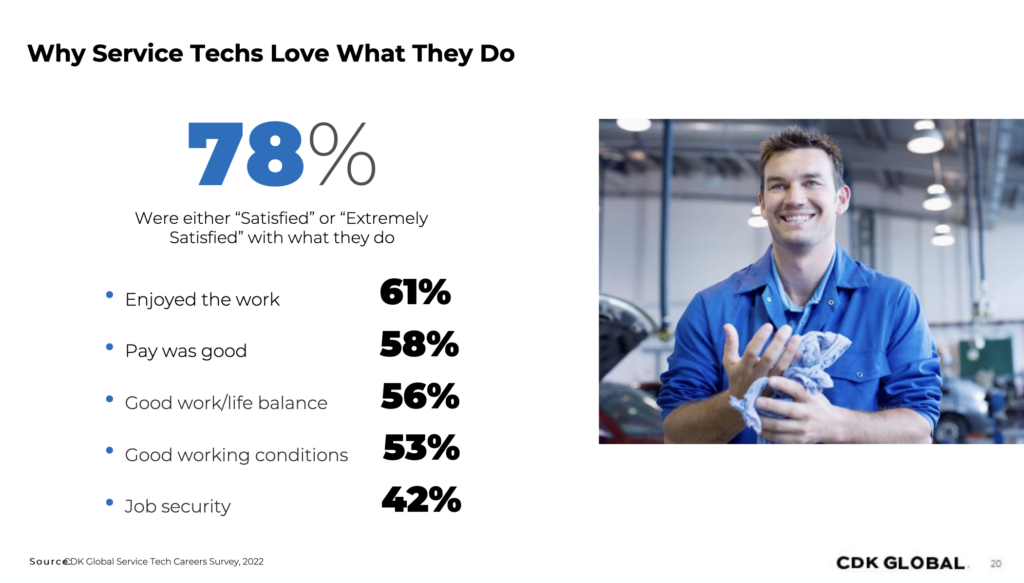 “These are the items that you can use to persuade someone who’s either switching their career, or young people that are just coming right out of high school or college, to consider this as a career,” she said.

Having a defined and written career path is important, too. “Your existing employees want to know that there’s room for growth as well,” she said. Shops might want to consider establishing mentorship programs, pairing new hires with more experienced professionals. 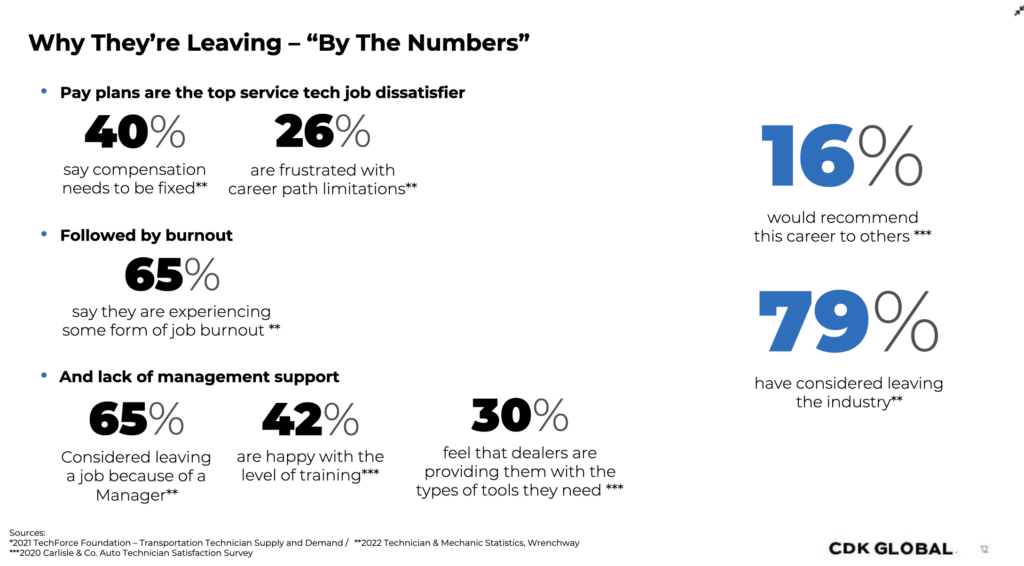 “I know one dealership that took their best technician and offered him the same salary to be a mentor over six new technicians they hired from their local high school,” Saylor said. “Now they’re getting three and a half times more work out of these six technicians…. The senior tech’s really happy, and now they have six new additional techs in their talent pool.”

Finally, Saylor encouraged employers to assess and refine their current work culture, offering opportunities for improvement and promoting their employees’ skills through Facebook, LinkedIn, and other social media sites.

In response to a question from the audience, both Kahn and Saylor agreed that bringing back a retired technician on a part-time basis, perhaps as a mentor, can be a good idea, provided that they’re prepared for current technology.

“If the person has been out of the workforce for a while, there may be some challenging moments,” Kahn said. “So if you’re going to think about bringing a retired tech back, you probably want to have a program for them so they can get themselves up to speed on some of the more advanced technologies that are now in vehicles.”

One audience member asked how to address a student’s concern that opportunities in the repair field might not be as prevalent in a few years, when their training is complete.

“I would say right there that their training is not complete,” Saylor said. “Things are going to continue to change. Training has to be an investment that you’re willing to make in your employees, so that they can see … there’s no end to this path.”

“Certainly, the demand for repair services is going up,” Kahn said. “If that question is implicitly talking about EVs, and the notion that they’re going to take less to repair, which could be true – and I’m a little careful on that assumption, because we only really have one brand that has a lot of data that talks about that.

“I believe the demand is going to be there, and it’s going to increase. I don’t think this is a problem that’s going away for a while.”

Kahn also addressed a question about warning signs to watch for that a technician might be ready to quit.

“In my experience, I almost never get warning signals,” he said. “I mean, no one is going to be really explicit. So you always have to be proactive…. Are we making sure that they feel wanted? that they have management support, maybe a mentor? Do they understand what training they can get, maybe how they can advance their career? How they can earn decent pay, and keep from getting burned out?

“If you’re doing that, you’re probably fine. And if you’re not, you won’t necessarily get warning signals. The warning signal will be, all of a sudden, Joe doesn’t show up on Friday.”

Grow and Retain Technicians by Providing Careers, Not Just Jobs