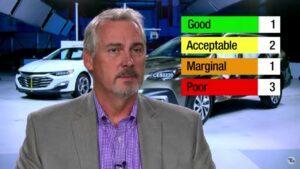 Only one of seven midsize cars tested earned a good rating in the Insurance Institute for Highway Safety (IIHS)’s updated side crash test.

Vehicles tested were the model year 2022: 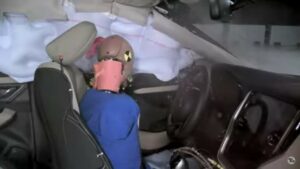 The Outback was the only midsize vehicle to earn a good rating. With somewhat higher levels of occupant compartment intrusion, the Sonata and Jetta rated acceptable.

Overall, this initial group of midsize cars did not perform as well as the first batches of small and midsize SUVs evaluated earlier — one reason possibly being their lower ride height, an IIHS news release states.

“With vehicles that sit lower to the ground, the striking barrier hits higher on the door panel,” said IIHS President David Harkey, in the release. “That potentially puts sedans and wagons at a disadvantage in this evaluation but reflects what happens in a real-world crash when these vehicles are struck by a higher-riding pickup or SUV.”

The Accord earned an overall marginal rating and the Malibu, Altima, and Camry earned poor ratings.

There was moderate intrusion of the B-pillar into the occupant compartment of the Accord and injury measures for the driver’s pelvis were somewhat elevated. The driver’s head also moved down past the side curtain airbag and hit the windowsill during the crash.

IIHS developed the updated side crash test after research showed that many of the real-world side impacts that still account for nearly a quarter of passenger vehicle occupant fatalities are more severe than the original evaluation. The institute previously said protecting vehicle occupants in side-impact crashes comes as a challenge because vehicle sides “have relatively little space to absorb energy and shield occupants, unlike the fronts and rears, which have substantial crumple zones.”

The new test was first used in 2021. The original test had been in use since 2003. The updated side crash test uses a heavier barrier traveling at a higher speed to simulate the striking vehicle. The new barrier weighs 4,200 pounds, close to the weight of today’s midsize SUVs, and strikes the test vehicle at 37 mph compared to a 3,300-pound barrier traveling at 31 mph in the original test.

“We expect automakers to respond to our updated side tests, providing increased protection for occupants and producing safer vehicles for consumers,” Harkey said in a video overview of the newest test results.

The Outback, Sonata, Jetta, Accord, Camry, Altima, and Malibu all earned good ratings in the original side test.

In the National Highway Traffic Safety Administration (NHTSA)’s crash safety rating program for side impact, the 2022 Outback scored five stars — the highest and safest possible rating — for both the driver and rear passenger.

A crash test dummy is shown in a 2022 Subaru Outback during a side crash test impact. (Credit: IIHS YouTube video screenshot)