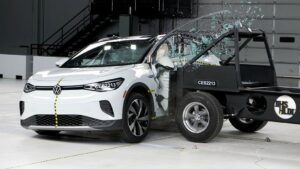 More than half the midsize SUVs tested in the Insurance Institute for Highway Safety (IIHS)’s new side-impact evaluation earned good ratings but one of the top five sold in the U.S. last year, according to Kelley Blue Book, wasn’t tested and two others faired only as acceptable overall – one step below a good rating.

The Toyota RAV4, Honda CR-V, and Nissan Rogue – the top three SUVs sold in 2021, respectively – were all rated acceptable overall in October when 20 small SUVs were tested by IIHS. No. 4, the Jeep Grand Cherokee wasn’t included in either of IIHS’ most recent side-impact tests. No. 5, the Toyota Highlander, rated good overall.

Midsize SUVs that were tested included:

IIHS announced the first ratings in the new test in October after more than half of the small SUVs tested received a good rating while half were rated marginal or poor.

Mueller’s research formed the foundation for the new test protocol. “These results will help confirm the adjustments they need to make to other vehicles going forward,” she said.

Side crashes account for about a quarter of passenger vehicle occupant deaths nationwide, according to IIHS. The institute has found that protecting vehicle occupants in side-impact crashes comes as a challenge because vehicle sides “have relatively little space to absorb energy and shield occupants, unlike the fronts and rears, which have substantial crumple zones.”

“We needed new, tougher test that represented the real-world crashes that are occurring today that involve higher speeds and heavier vehicles,” said IIHS President David Harkey, in a video about the midsize SUV test results. “What we have done is develop a heavier barrier and are now running our tests at a higher speed. Those two factors combined create 82% more energy in our tests today.”

The honeycomb striking surface of the new barrier also has a different design that acts more like the SUVs and pickups traveling on roads today.

Just as the original side test, the new test uses two Small Side Impact Dummies (SID-IIs) in the driver seat and in the rear driver side seat and are similar in size and shape to a small woman or 12-year-old child, IIHS said.

“For vehicles to earn a good rating in either the old or new side test, the vehicle’s occupant compartment must hold its shape well during the crash,” the release states. “Measures collected from the dummies must not indicate a high risk of severe injuries. In addition, the side airbags and seat belts should prevent the dummies’ heads from making hard contact with the interior of the vehicle.”

Except for the Wrangler, all the midsize SUVs tested earned good scores for their driver and passenger airbags and head injury measures. The Wrangler, which does not have side airbags for the rear seating positions, earned a poor rating for passenger head protection.

“The absence of this crucial safety feature allowed the head of the rear passenger dummy to hit the vertical support of the vehicle’s removable roof and the window frame of the rear door,” IIHS said. “This fault was serious enough to bring the overall rating down to marginal, despite good ratings in all the other areas.”

However, only the Wrangler, CX-9, and ID.4 earned good ratings for preventing injuries to the driver’s pelvis – the body region most frequently injured in real-world side crashes. The Ascent, Aviator, Enclave, Explorer, and Traverse earned acceptable scores for preventing that type of injury.

Half the vehicles that earned good ratings overall – the Atlas, Atlas Cross Sport, Highlander, Pathfinder, and QX60 – showed a moderate risk of severe injury to the driver’s pelvis. The driver’s “vital body regions” – head and torso (chest and abdomen) – were well-protected in these models as were the rear seat passenger’s head, torso, and pelvis.

“Their good and acceptable structures also suggest that their occupant compartments are robust,” IIHS said. “The small SUVs rated in October also struggled with driver pelvis injuries, but they performed markedly worse than their larger counterparts in preventing injuries to the chest or abdomen, perhaps due to their lower height relative to the striking barrier.”

IIHS Vehicle Research Center Vice President Raul Arbelaez attributes the difference to a higher-riding vehicle possibly benefitting from the barrier striking lower on its side.

The Enclave and Traverse fell short of good ratings on occupant compartment structure and scored a marginal rating.

The Murano earned a poor rating and the Pilot, Passport, Palisade, and Telluride earned marginal ratings for structure. In the Passport and Pilot, the driver dummy also had high pelvis injury measures and the passenger dummy had high torso injury measures. Injury measures were also high for the driver’s pelvis in the Murano, Palisade, and Telluride, IIHS said. The Wrangler earned a good rating in all of those categories but earned a marginal rating overall because of its poor head protection for the rear passenger.

All 18 midsize SUVs and all 20 small SUVs evaluated in October earned good ratings in the original IIHS side test, which will remain the requirement for the Top Safety Pick and Top Safety Pick+ awards until the updated test replaces it in 2023.