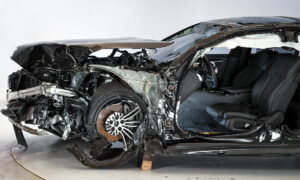 Adrian Lund credits the safety features engineered into his 2020 BMW 540i with saving his life in a severe collision last summer.

When Lund’s car was struck head-on by a wrong-way driver on Interstate 95 in northern Virginia, the force of the impact, at a combined speed estimated at 100-110 miles per hour, sent his car spinning and rolling before coming to rest upside down on the right shoulder.

In his 30-year career at the Insurance Institute for Highway Safety (IIHS) and Highway Loss Data Institute (HLDI), Lund had worked to usher in many of the safety improvements that were built into his BMW. Now Lund, who retired as president of IIHS in 2017, was their beneficiary.

“That is the irony, isn’t it?” Lund told Repairer Driven News. “That I was in [a combination of] two types of crashes that we had worked hard to get manufacturers to design for. And luckily, the manufacturers came along when we showed them the objective evidence of how vehicles were deforming and that some cars were doing a better job. They responded.

“The crash I was in was essentially a small overlap crash, followed by a rollover,” Lund said. “The Institute pioneered testing for small overlap style crashes, and we introduced a very stiff roof crush evaluation a few years back. This car had good ratings in both. I guess I personally validated that the ratings were true.”

Although Lund’s car had not been in a previous incident and repaired, we asked if his experience had prompted thoughts about safe and proper collision repair.

“To the extent possible, you want to repair a vehicle to perform as it did when it came off the assembly line,” he said. “You don’t want somebody to say, ‘Well, I’m going to make this stronger,’ because you don’t know how that interacts with other safety systems. So you do want a car that is essentially what came off the assembly line, because that’s all been tested, and you know how it works.”

What about instances of pushback, when insurers refuse to pay for OEM parts and procedures that collision professionals and automakers believe are necessary in making proper repairs?

“I think where a lot of pushback is, is on cosmetic parts,” Lund said. “We’ve done tests at IIHS that show that you can take away many of these cosmetic parts and it really doesn’t matter. But if you start getting into repairing frame rails, bumper beams going back on, hoods, you want those things to be like they were when the car was designed, because those actually absorb the energy of the crash.

“We’ve tested with door skins removed, and it doesn’t change the results. Because if you think about the energy of that crash, door skins and fender skins and things like that really can’t absorb much of that energy. They’re almost irrelevant, as our tests have shown. But like I said, if you get into bumpers and frames and things like that, now it’s very important that that car’s put back the way it was,” he said.

Those critical parts can be OEM, or aftermarket parts that perform in the same manner, he said.

That’s in line with a 2018 statement issued by IIHS on the safety of aftermarket parts: “Aftermarket parts fall into two categories: cosmetic and structural. Previous IIHS research has shown that cosmetic parts don’t alter crash test results, so where they are sourced — whether aftermarket or OEM — is irrelevant. Fenders, quarter panels, door skins, bumper covers and trim aren’t responsible for safeguarding occupants in a crash. That is the job of structural parts.

“Structural parts make up the front-end crush zone and safety cage. The crush zone absorbs crash energy, and the safety cage helps protect occupants by limiting intrusion. Replacement structural parts must exactly replicate the original parts to preserve the integrity of a vehicle’s crashworthiness, whether they are sourced from the OEM or an aftermarket supplier. IIHS research shows that some aftermarket non-OEM parts can meet these requirements.”

That statement was in response to a Dallas law firm’s crash tests of a Honda Fit that had been modified with certain aftermarket parts. Although the firm said the tests uncovered “monumental” differences with IIHS crash test results of an unmodified Fit, the Institute said the differences were not significant.

After that statement was issued, RDN reported in February 2018 that “A lack of context as to what constitutes ‘normal’ results has prevented the Insurance Institute for Highway Safety from analyzing some of the findings that seemed to support attorney Todd Tracy’s criticism related to a crash-tested 2013 Honda Fit bearing multiple aftermarket parts.”

In that story, IIHS Chief Research Officer David Zuby told RDN that in some cases, the Institute lacked data to determine if the differences recorded were part of the normal variability unaltered cars naturally show during crash testing.

Lund told RDN he has no position on OEM repair procedures. “When there is significant structural damage, I would hope that the OEM procedure works well, but I don’t know that they always test to determine whether their recommended procedure is adequate or better than others,” he said. “There have been cases where insurers (for example, Allstate) have worked with automakers to demonstrate that an alternative procedure is just as good or better.”

While advanced driver assistance system (ADAS) features have been shown effective at reducing the number of collisions, Lund said his experience demonstrates that there are certain types of accidents that technology is not yet able to prevent.

Lund explained that the crash happened as he was moving into the right lane, and had his attention on the right side of the road. He didn’t spot the car that collided with his until the last second, as it approached from the left.

Unfortunately, the driver of that car, a 29-year-old woman, was not wearing her seat belt. She was thrown from the vehicle and killed.

“I think it just goes to show that you don’t ever know what’s going to happen, even with smart vehicles that can warn you of upcoming things,” he said.

“You want all this new smart technology to help keep you out of a crash. But this shows that it’s still very important to have a vehicle that’s going to protect you when the crash occurs because we’re still at a stage where crashes are going to occur.”

Lund said automakers have told him that a head-on crash is “a hard scenario” to address with technology. “I don’t think any [ADAS technologies] respond to full head-on crashes. Like my BMW – If I had been moving over into a lane with an oncoming vehicle, I know that it would have tried to prevent that. But when it’s head-on, they’re just not confident they know how to do that.

“These smart vehicles will protect you in the crashes, they’re designed to protect you. But there are still crashes that they don’t know how to design for.”