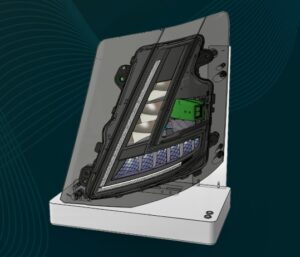 Cepton has developed technology to incorporate a compact, short-range lidar unit into an automobile headlamp with the intent to eliminate blind spots around a vehicle.

The lidar integration solution was developed with ZKW Group, which specializes in premium lighting systems and electronics, the company announced. ZKW is a Tier 1 supplier to such OEMs as BMW, Ford, General Motors, Mercedes-Benz, Nissan, Volkswagen, and Volvo.

Although lidar has been widely recognized as a necessary component in advanced driver assistance system (ADAS) technology for autonomous driving, Cepton is also promoting its use to protect the safety of pedestrians and cyclists. The in-headlamp technology uses Cepton’s Nova sensor – a miniature, wide-field-of-view lidar device for near-range applications that is priced below $100 for high volume automotive applications.

“With blind spot detection becoming a mandated vehicle safety feature, Nova offers an ideal solution for an expanding range of automotive applications,” Cepton said in a press release. “It can be deployed across Advance Driver Assistance Systems and Autonomous Vehicles to enhance the protection of vulnerable road users while enabling autonomous driving and parking capabilities.”

The headlamp integration solution will be unveiled at IAA Transportation 2022 that is scheduled for Sept. 20-25 at the Deutsche Messe AG exhibition grounds in Hanover, Germany.

Cepton will be giving live demonstrations of Nova’s near-range 3D sensing capabilities that are designed to help eliminate perception blind spots around vehicles. It will also exhibit its lidar integrated into a heavy-duty truck headlamp provided by ZKW.

“We are excited to showcase our collaboration with ZKW at this year’s IAA event,” Jun Pei, Cepton’s CEO and co-founder, said in a statement. “ZKW is a leading innovator of automotive lighting technologies, and working with the ZKW team allows Cepton to demonstrate how our lidars are optimized for use in everyday vehicles.

“Being able to seamlessly integrated into locations like headlamp is a key factor of the outstanding scalability of Cepton lidar. With that, we aim to bring lidar’s safety benefits to everyone on the road – drivers, passengers and road users alike – while helping advance the future of autonomous mobility.”

Nova’s compact form makes it easy to incorporate in various locations around a vehicle, providing the option of 360-degree perception, Cepton said. “This helps the vehicle accurately detect close-proximity objects such as pedestrians, bicycles and obstacles on the road surface,” it said.

The demonstration comes in the midst of increasing attention by the federal government to the issue of pedestrian deaths and injuries. According to the Insurance Institute for Highway Safety (IIHS), pedestrian crash deaths have increased nearly every year since hitting a low point in 2009, rising 59% to top 6,500 fatalities in 2020, the latest year for which data are available. The same year, another 55,000 pedestrians were injured in motor vehicle crashes.

IIHS said a suspected factor in the rising numbers is the growing prevalence of larger vehicles. While more research is needed, the institute said, previous studies have shown that the wider A-pillars found on pickup trucks and SUVs can create blind spots that can make it hard for drivers to see pedestrians. Other design elements of larger vehicles, such as their high ride heights and long front ends, could also impede drivers’ ability to see pedestrians, it said.

The National Highway Traffic Safety Administration (NHTSA) has said that one of its goals in increasing pedestrian safety is to “Expand the availability of vehicle designs and features that help to prevent crashes and minimize the impact of crashes on both occupants and non-occupants.”

IIHS and the Highway Loss Data Institute (HLDI) have petitioned federal regulators to require OEMs to equip all new passenger vehicles with automatic emergency braking (AEB) systems capable of detecting and avoiding pedestrians in the nighttime, as well as in daylight.

“Both a HLDI analysis of insurance claims and an IIHS study of police-reported crashes have found large benefits from pedestrian AEB. However, while the IIHS study found that the systems cut pedestrian crashes in daylight or on well-lit roads, it found virtually no effect at night on unlit roads,” IIHS-HLDI said. “More than a third of fatal pedestrian crashes occur under those conditions.”

Existing pedestrian AEB systems use cameras, radar, or a combination of both. Lidar, which stands for light detection and ranging, works by firing a beam of laser light at an object, and then capturing the reflection of that beam. It offers capabilities that cameras and radar do not, capable of providing a 3D map of a vehicle’s surroundings in bad weather and good.

Featured image: A drawing of a Cepton lidar unit incorporated in a truck headlamp. (Provided by ZKW Group)