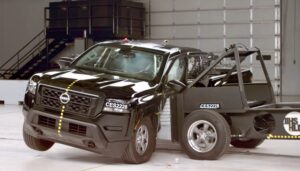 Five out of six small pickup trucks tested earned good or acceptable ratings in the Insurance Institute for Highway Safety’s updated side impact test, the best performance yet by any group of vehicles.

In the updated test, the barrier weighs 4,200 pounds — close to the weight of today’s midsize SUVs — and strikes the test vehicle at 37 mph, compared with a 3,300-pound barrier traveling at 31 mph in the original evaluation. Together, those two changes mean the test involves 82% more energy.

“Overall, this was a solid performance from these vehicles,” IIHS Senior Research Engineer Becky Mueller said in a news release. “Their high ride height means that the barrier we use to represent a striking vehicle hits the strong door sill structures directly. This likely prevented excessive intrusion into the occupant compartment, except in the case of the Tacoma.”

IIHS said that the structure and safety cages of the Colorado, Canyon, and Ridgeline, all rated good, held up “relatively well,” contributing to a minimal risk of most injuries. “However, injury measures taken from the dummies indicated a possibility of a pelvic fracture for the driver of the Colorado, the Canyon and especially the Ridgeline,” IIHS said.

Among the vehicles rated acceptable, the Frontier’s structure held up the best of the six vehicles, while the Ranger’s occupant compartment was also maintained relatively well, IIHS said, minimizing the risk of most injuries. However, rear passenger dummies’ heads struck the C-pillar through the side curtain airbag in both vehicles, it said.

The marginal-rated Tacoma’s structure and safety cage were not maintained well during the crash, IIHS said. It said the impact from the striking barrier crumpled the door sill and B-pillar, pushing the B-pillar to within a few inches of the center of the driver seat.

“That alone pushed the overall rating down to marginal,” Mueller said. “We weight structural performance very heavily because it is tied so closely with survivability.” 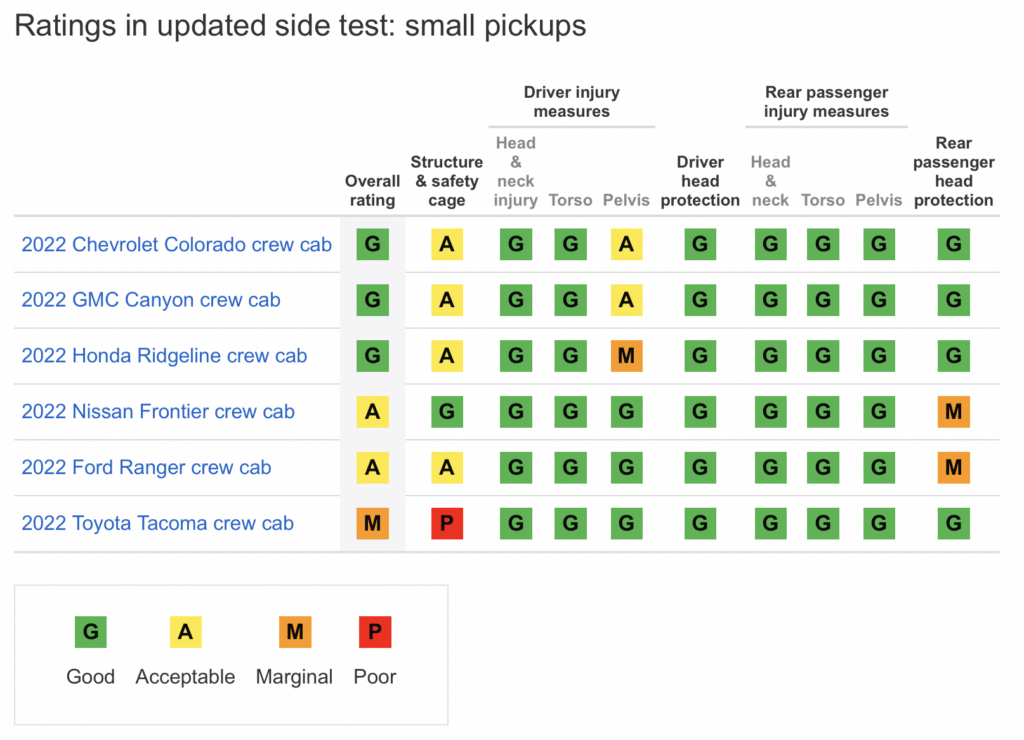 In previous tests, other classes of vehicles have struggled. In a test of 20 small SUVs announced in October 2021, just one earned a good rating, with nine rated acceptable, eight marginal, and two poor. Similarly, in a test of seven midsize sedans conducted in May 2022, only one was rated good, with two rated acceptable, one marginal, and three poor. Only midsize SUVs have done relatively well, with 10 of 18 rated good, two acceptable, and six marginal in a May 2022 test.

Joe Young, director of media relations for IIHS, previously told Repairer Driven News that the institute approached changes to its test by examining “real-world crashes in which people were still being injured or killed in side crashes in vehicles that performed well in our original side crash test.”

“There’s certainly a concern that as vehicles become larger and heavier, especially with more EVs on the road, those inside smaller vehicles will be at increased risk in a multivehicle crash, and this is a trend we’ll continue to keep an eye on as we reevaluate our test programs,” Young told RDN.

The National Highway Traffic Safety Administration (NHTSA) also conducts a side barrier test, but the details are different. In the NHTSA test, a 3,015-pound barrier crashes into a stationary vehicle at 38.5 mph.