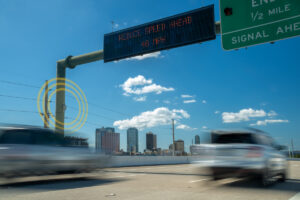 The pilot began in September 2015 when the U.S. Department of Transportation (USDOT) designated THEA as a test bed for CV technology and ended Sept. 30, 2022. The award led to a full-scale operation of CV devices throughout downtown Tampa culminating in a collaboration between Honda, Hyundai America Technical Center, Inc., and Toyota Motor North America.

One of the goals of the project was to deploy connected vehicle technology “to provide the next evolution of delivering safer transportation,” according to a news release about the project.

The pilot produced a massive amount of open shared data that can be used to help spur private and public collaborations, eventually resulting in better driving conditions. During testing, 21 potential pedestrian crashes and 17 potential vehicle crashes were avoided and 19 red light violation warnings, 14 wrong-way driving alerts, and over 20,000 safety advisories were issued.

“These stats are impactful,” said THEA Director of Planning and Innovation Robert Frey. “All of these alerts represent a person that avoided a traffic incident like a collision or crash. The pilot successfully demonstrated that connected vehicle technologies transmit crucial transportation information which can save the lives of drivers, pedestrians, and cyclists.”

“Shared and, eventually, automated shared vehicles are a new component of the transit paradigm,” said THEA Executive Director and CEO Joe Waggoner. “It will become the first mile, last mile connector between the transit corridor and where you can live and work. The future of automated, connected, electric, and shared technology is here.”

The pilot consisted of four phases: planning, development, data collection, and an industry-wide collaboration with automakers.

“According to some of the early research, connected vehicle technology can address at least 78% of vehicle-to-vehicle related collisions,” said Honda Research Institute Chief Engineer Sue Bai. “The technology we have deployed in the THEA CV Pilot is paramount in achieving Honda’s vision for a collision-free society.”

The pilot was the only program to implement real-time, V2I and V2V communications through the recruitment of Selmon Expressway drivers and was the only site in the U.S. that produced real-time data. The other two sites — awarded as part of the USDOT’s Connected Vehicle Pilot Deployment Program — were New York City and the Interstate 80 corridor in Wyoming.

Now that the pilot has ended, THEA says it will continue its efforts to advance the Selmon Expressway and implement intelligent transportation systems. All of the data that was collected will be used to leverage existing technology on the I-4 Frame in partnership with the Florida Department of Transportation (FDOT) in a $43 million program budgeted over the next six years.