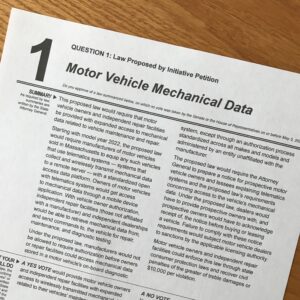 The Massachusetts attorney general has asked a federal judge to reject an argument that language differences between the state’s vehicle data access legislation and a similar initiative in Maine have a bearing on a legal challenge to the Massachusetts law.

The Alliance for Automotive Innovation (AAI) had asked District Judge Douglas Woodlock to compel testimony from the Auto Care Association (ACA), which it described as a proponent of the legislation in both states, to explain the “curious differences” between the two.

In a brief filed on Nov. 22, AAI argued that those differences show that the drafters of the Maine initiative recognize significant flaws in the Massachusetts Data Access Law. It asked Woodlock to allow ACA to be subpoenaed, and to reopen evidence in the two-year-old case.

In a reply filed Tuesday, Attorney General Maura Healey asserted that “what the Maine proposal says, and what the ACA or anyone else thinks about it, are completely irrelevant to the issues that require decision in this case.” 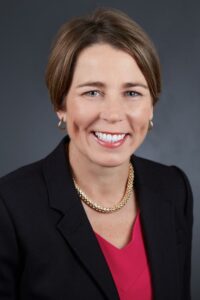 “ACA’s views regarding the proposed law in Maine have no bearing on whether the Alliance has associational standing in this case; whether it has a right of action; or whether anything in the [federal] MVSA [Motor Vehicle Safety Act] or CAA [Clean Air Act] even potentially conflicts with the Data Access Law,” Healey wrote.

“This Court should deny the Alliance’s request because none of the evidence it seeks to discover has any bearing on its facial challenge to the Massachusetts law, and because the resulting delay would undermine the public’s interest in prompt resolution of the Alliance’s preemption claims,” she wrote.

Healey, who is defending the law passed by Massachusetts voters in November 2020, detailed the four issues she believes remain to be decided:

“A finding against the Alliance on any of those issues will require judgment for the Attorney General; the Alliance cannot prevail unless it wins on all four,” Healey wrote.

ACA, while not a party to the suit, filed its own brief in opposition to AAI’s request on Tuesday. It accused AAI of seeking to “use the discovery powers of this Court to prepare to fight a right to repair ballot initiative that is gathering momentum in a state other than the Commonwealth of Massachusetts and has no bearing on the issues in this lawsuit.”

The documents AAI is seeking would give it an unfair advantage in “potential future disputes between the parties on right to repair issues,” ACA said. It said the “sensitive and confidential information” includes “advocacy and public relations strategies, internal analyses, communications with supporters, and financial information pertaining to the Maine initiative.”

In its Nov. 22 brief, AAI argued that Woodlock should compel ACA to testify because evidence shows that the organization “stands at the crossroads” of the Massachusetts and Maine efforts, and should have relevant information about the differences between them.

“The two laws would share many of the same problematic features—including such things as requiring the dangerous standardization of authorization to access sensitive vehicle data, cutting original equipment manufacturers (‘OEMs’) out of the process of securing their vehicles, and otherwise introducing significant cybersecurity threats,” AAI said. “But there are several curious differences between the two. These changes raise a reasonable inference that the sponsors of the Data Access Law consciously took a different, though still highly problematic, approach in crafting their latest state-ballot initiative.”

The evidence AAI is now seeking “goes to the principal matter before the Court: whether OEMs can comply with the Data Access Law’s requirements while satisfying their federal safety and emissions obligations,” AAI wrote.

The Alliance is focused on four critical areas where drafters of the Maine initiative omitted or modified language in the Massachusetts Data Access Law, which it says suggests that the backers of the law “now recognize it is problematic,” contrary to the positions Healey has taken in defending the law.

The disputed Massachusetts legislation, an expansion of the state’s earlier right-to-repair law, requires OEMs to equip every vehicle sold in that state that uses a telematics system with “an inter-operable, standardized and open access platform.” Approved in November 2020, the law was to have taken effect with the 2022 model year.

AAI immediately challenged the law in U.S. District Court for the District of Massachusetts, arguing that the law would require OEMs to violate federal regulations and that the deadline could not be met. Healey agreed not to enforce the law while the legal challenge plays out.

Evidence has already been reopened once in the case after Healey discovered that Subaru and Kia had disabled the telematics of their vehicles sold in Massachusetts after passage of the law.

AAI has maintained that the new data law would seriously hamper efforts by OEMs to keep vehicle data and vehicle systems safe, and warned that “access to that data, and to the secured vehicle systems that generate that data, could, in the wrong hands, spell disaster.”

Proponents, such as the ACA, have argued that the data access law is necessary to protect independent shops’ ability to access the OEM information needed to maintain and repair vehicles.

Critics have said that such access is already guaranteed through the 2014 Memorandum of Understanding between the OEMs and the aftermarket, an agreement that’s been held up as a model for other industries.