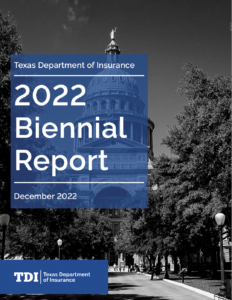 The Texas Department of Insurance (TDI) has suggested that the state legislature turn its attention to the right to appraisal (RTA) included in policyholders’ contracts, but has stopped short of recommending specific legislative action.

By including RTA under the policy considerations section of its 2022 Biennial Report, TDI intends to bring the issue to lawmakers’ attention “to allow policymakers to consider the issue and possible public policy responses,” TDI spokesman Ben Gonzalez told Repairer Driven News.

According to the Biennial Report, TDI approved an auto policy of a large insurer that eliminated the policyholder’s and the insurer’s right to an appraisal for disagreements about vehicle repair costs. With that change, RTA exists only for total loss vehicle claims. TDI officials have identified that insurer as State Farm.

In July, the report said, TDI rejected a filing from another large insurer with the same appraisal limitation for its auto policy, finding that the carrier didn’t provide enough information to support the request. That insurer is GEICO, according to a filing publicly available on the National Association of Insurance Commissioners (NCIS) SERFF Filing Access website.

In correspondence with TDI, GEICO said it was following the lead of State Farm, “one of GEICO’s major competitors in the Texas insurance marketplace,” and asserted that “equitable principles of fair play and equal justice dictate that the Texas Department of Insurance approve this same appraisal clause procedure for use by GEICO in its Texas automobile insurance contracts.”

In August, State Farm filed residential property policies that would eliminate RTA for all claims. According to the report, the carrier provided data showing that almost 90% of homeowners insurance claims that went through appraisal over a three-year period were settled without litigation.

Other insurers have amended appraisal provisions to include more deadlines, require detailed appraiser estimates, and define qualifications for appraisers and umpires, TDI said.

On its website, TDI recommends that consumers invoke an appraisal clause, if their policy includes one, if they believe their carrier is not offering a large enough settlement.

TDI’s inclusion of RTA in its report follows a Sept. 6 public hearing on the subject held by the Insurance Committee of the Texas House. The committee heard testimony from repairers and insurers during that hearing, but took no action.

Burl Richards, president of the Auto Body Association of Texas (ABAT), told Repairer Driven News that ABAT stands behind the customer’s right to an appraisal as a mandatory policy provision.

“I believe that over the past four years ABAT has been doing its job and made its voice loud enough to bring these issues to TDI and the Texas legislature,” Richards said. “Insurance companies have been taking advantage of consumers, and by getting rid of the right to invoke appraisal they have almost eliminated every dispute resolution [tool] given to the consumer.”

“We have brought undeniable, evidence, to the Texas legislature and TDI,” he said. “We believe that TDI has no other choice but to openly address the issue. That is why they added it to the biennial report.”

Richards said ABAT will continue to bring attention to the issue, and work to have a mandatory appraisal option in every policy written in Texas.

The Texas House in May 2021 voted 91-50 in favor of a bill requiring insurers to include appraisal clauses within their auto policies, only to see it die in a Senate committee.

Robert McDorman, the managing director of Texas-based Auto Claim Specialists, told RDN that the Insurance Committee has reached out to him for a copy of the PowerPoint presentation he delivered at the September hearing.

“I was a little surprised after reading the TDI Biennial report that TDI placed the Right to Appraisal issue only as a consideration,” McDorman said. “After listening to the panel of experts who testified during the [hearing], I do not see any way this sensitive issue could not be an emphatic recommendation by TDI.”

According to information presented by McDorman to the committee, settlements in repair cases were on average more than 150% higher when the appraisal clause was invoked. 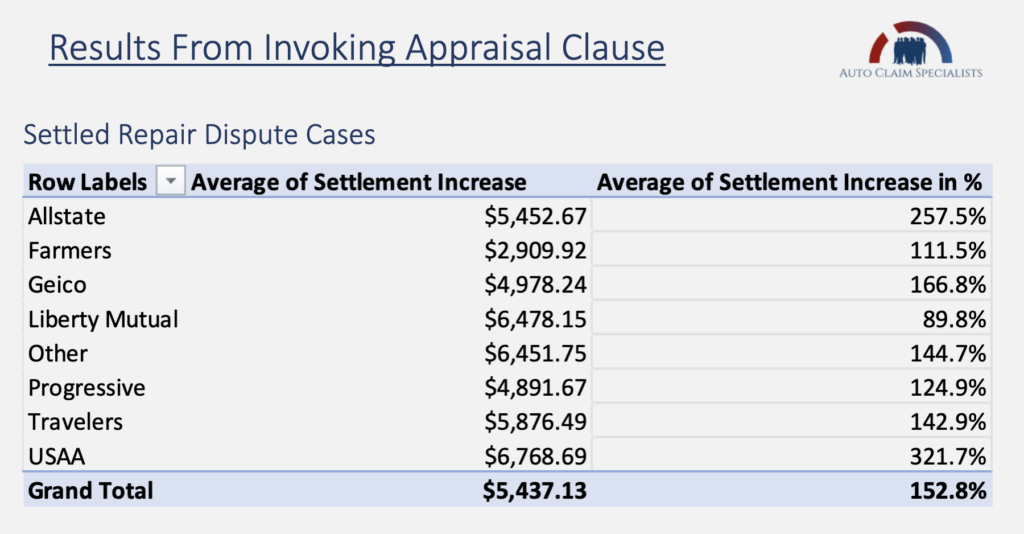 In written testimony to the committee, Ware Wendell, the executive director of Texas Watch, a non-partisan, nonprofit organization that has advocated for policyholders for over 20 years, called for measures “to create fairness in the appraisal of automobile property damage claims.”

“Our position is if we are going to have appraisal for automobile policyholders, the process should be a two-way street — fair for all parties, invoked within a reasonable time frame to avoid delays, and providing full indemnification for a safe repair. This policy would promote the fair valuation of claims and most importantly the safety of all motorists on our roads by truly restoring vehicles to their pre-loss condition,” he wrote.

According to documents available through NCIS, CDI submitted 16 questions to GEICO in evaluating its proposal to eliminate RTA from its policies for all but total loss claims. The carrier failed to provide complete answers to all or part of seven of those questions.

Below are the specific questions, and GEICO’s deficient responses:

We appreciate your question. This data is not readily available and requires a manual audit. In an effort to answer your question in the most expedient fashion, we reviewed one year’s worth of claims with payments made to independent appraisers. Our review indicated payments made for 56 appraisals were completed on vehicles with total loss claims. Of these, fifty (90%) of the appraisals were invoked by policyholders.

We appreciate your question. This data is not readily available and requires a manual audit. In an effort to answer your question in the most expedient fashion, we reviewed one year’s worth of claims with payments made to independent appraisers. Our review indicated payments made for 20 appraisals were completed on repaired vehicles. Of these, sixteen (80%) of the appraisals were invoked by policyholders.

We appreciate your question. This data is not readily available and requires a manual audit. In an effort to answer your question in the most expedient fashion, we reviewed one year’s worth of claims with payments made to independent appraisers. Our review indicated the following:

How many appraisals in the last three years required an umpire?

We appreciate your question. This data is not readily available and requires a manual audit. In an effort to answer your question in the most expedient fashion, we reviewed one year’s worth of claims with payments made to independent appraisers. Our review indicated 12 instances where an umpire was required.

Is there a difference in the cost of appraisals for total loss and repair disputes? If so, what is it?

These costs vary based on distance to the vehicle, hours billed, number of inspections and other factors such as the complexity of the claim and are determined on a case by case basis.

Who are the appraisers used by GEICO? What are their qualifications?

Entities we have utilized for appraisals includes but is not limited to: SCA, PDA, Frontier, and Pinnacle. Based on our information they are Texas licensed public adjusters experienced in property and auto estimating.

In response to a question, GEICO said that its proposed change benefits policyholders with repair disputes because it “Prevent[s] unnecessary delays in the claim’s settlement and repair process;” “Prevents unnecessary additional expenses for the policyholder;” and “Maintains consistency in the claims handling process.”

Asked how disputes would be resolved in the absence of an appraisal clause, GEICO responded in part, “Most repair facilities operate in a professional and customer centric manner and negotiate amicably and professionally with insurance companies to return our mutual customers’ vehicles to pre-loss condition. Upon approval of the amended policy language those repair facilities using the appraisal clause to unnecessarily inflate repair costs will negotiate with GEICO to come to an agreement.”

Featured image: The cover of the 2022 Biennial Report, delivered by the Texas Department of Insurance to the Texas legislature earlier this month.