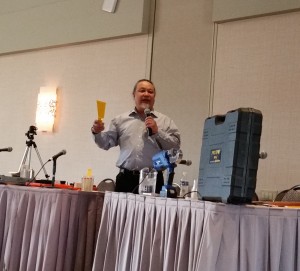 Collision repair technicians and owners might find a way to ease their particular pet peeve shop task through the latest tool showcase from the SCRS Education Committee.

Committee heads Toby Chess and Kye Yeung presented the technology to the Society of Collision Repair Specialists’ open board meeting and to the entire Collision Industry Conference last month in Palm Springs, Calif.

The duo bought all but two of the items and stressed that while “we’re not endorsing anything,” the gear seemed cool (“Kool”) or helpful.

Here’s some picks along with commentary from the CIC presentation. See images of most of the gear with their PowerPoint presentation here. (Also, find the 2015 presentation coverage here.)

Dent Fix shunt pliers: In the past, you had to create your own to help join materials, Chess said. Now, you can just get Dent Fix’s.

Dent Fix Magnetic COB LED Wand Lamp: “It is extremely bright,” Chess said of the work light, and its magnetism also could come in handy.

Goop Scoop from GL Enterprises: Yeung said the glorified spatula helps you scrape the sides and bottom of a mixing container to prevent bottom line-hurting waste.

GL Enterprises Shiners: Disposable clear cards over a paddle are useful for doing a color-match of clearcoat, Yeung said.

Simply remove a button, turn the can, insert the button into the back, punch, shake the can and you’re done. The material lasts for four days, and shops can discard the can in the trash, Yeung said.

“Here is a product that makes it real easy for you,” he said.

WRD Spider glass kits: Yeung said he was “in love with” the WRD Glass Tools Spider glass removal kits, which used a line similar to a “fishing line” to cut glass without nicking or damaging carbon fiber, the pinchweld or paint.

Yeung said it made it possible to do glass replace and install procedures within his shops.

“This thing’s just very, very easy to do,” he said.

Steck aluminum Skin Zipper: Chess observed that it’s easy to crack the aluminum door skin on the Ford F-150, but the Steck zipper lets you easily create a rope-hem flange.

“They have one for steel, also,” Yeung said. Just don’t mix them up and risk corrosion.