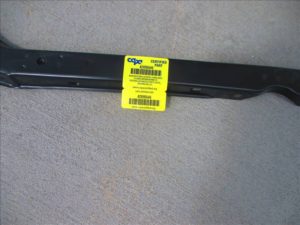 After a Vermont repairer’s Rockwell hardness test of CAPA radiator supports revealed the parts to be stronger than the Subaru and Toyota originals, CAPA defended its testing and said it had decertified at least one of the components.

Such equipment’s findings can be converted to tensile strength, and Parker said he found a CAPA-certified upper tie bar of a Subaru and Toyota Tundra lower radiator support to be roughly 16,000 psi (110 megapascals) stronger between the two parts and their OEM counterparts.

Too strong can be just as problematic as too weak in vehicle design. For example, OEMs use “crush zones” built into the front of a vehicle or “soft zones” in an otherwise ultra-high-strength steel part like a B-pillar or rear rail to manage crash energy and protect occupants. Also, differences in strength can affect airbag timing if the parts are used by airbag sensors.

Replaying to Parker (and basically the rest of the industry, given the folks on the email chain), Klouser wrote Wednesday that she’d urged Parker back in September 2015 to submit a quality complaint. (See the most current version of the exchange here, with minor edits and redactions.)

“In my response I indicated that if you believed that the two CAPA Certified radiator supports that you referenced (or any other CAPA Certified part) were not comparable to their car company service counterparts, that you should submit a CAPA Quality Complaint so we could evaluate the parts in question,” she wrote.

The issue of the Subaru upper radiator tie bar’s quality was actually raised by an insurer in May 2015, according to Klouser. She said CAPA asked for the part, but didn’t get it and so bought their own from the market.

“At that time, we were able to verify the concerns raised.  The part, which originally met our tensile and yield strength comparative tests, no longer did so.  We immediately decertified the part lots tested and prohibited the manufacturer from making any more CAPA Certified versions of the parts until they could demonstrate proper material properties based on yield and tensile strength testing.”

CAPA’s May 4, 2015, weekly update does list the Auto Power part as decertified. We contacted Parker about the timing of when he bought the part and the tie bar for the Tundra and he said he was researching it and would respond to the list.

Obviously, if the insurer demanded the part or a vendor sold it after the decertification date, that’s bad news. CAPA in this case only decertified particular lots of the bar — 07/13A and 06/14A — not the entire production run. It’s unclear if the lot numbers are references to specific months and years — which would perhaps give a sense of how long decertified parts had been installed on vehicles — and we’ve asked CAPA for more details. Klouser urged Parker and everyone else with a faulty part to contact CAPA and submit a complaint; the organization said it’d like to buy the parts.

“You mentioned, generically, a number of other parts which you believe may have material differences from the car company brand service parts.  We would very much appreciate the opportunity to purchase the parts from you and put them through the CAPA testing process,” Klouser wrote. “If that is not possible, if you could identify the parts, we will purchase them from the market for testing.  A key element of the CAPA program is our complaint process – we strongly encourage and appreciate shops telling us when they uncover a perceived issue.”

“We test parts to identify which ones meet our comprehensive standards, which as you indicated in your email, is impossible to do in the field,” Klouser also wrote. “In fact, we have tested a number of parts that look and fit just fine, only to find they are made of the wrong materials or improper construction.  So as we did when we were first notified of the problems with the Subaru, we will take any actions necessary when a part surfaces that does not meet our standards for functional equivalency to the car company brand service part.  As such, we look forward to getting more information from you on the parts that you have studied.”

Klouser also questioned the accuracy of using a Rockwell hardness reading converted to yield strength, even though it appears from the decertification that Parker was correct.

“Regarding your specific concern, we agree that the critical performance, appearance, and material characteristics of a CAPA Certified part should mimic those of the car company brand part,” Klouser wrote. “To that end, we use tensile and yield tests to compare strength, which the material engineering community has determined  are much more accurate, accepted, and useful than hardness tests for comparing material strength.  Hardness tests are performed on metal components only when the design or shape of the part precludes tensile and yield strength testing.  Theoretically, hardness correlates to strength, but it is not as accurate as tensile and yield tests in determining the actual strength of a part.” One repairer responded to the email chain, questioning the use of the word “mimic” and why the impetus should be on the shop to file complaints.

“I don’t mean to step into this email but I don’t see any reference to how you take all the defective parts off the road and off the cars that have been installed once a REPAIRER tells you they found a defect?” Mark Cobb of Windham, Maine-based Cobb’s Collision Center wrote Wednesday to the email chain. “Also how come I am constantly still getting CAPA certified parts that even physically look different then their OEM counter parts? Why does the shop have to perform all this parts testing and complaint filing for free? How is that our issue again? Who made the legal definition at CAPA as to what is and what is not a ‘cosmetic’ part of the car?  When you say, ‘Regarding your specific concern, we agree that the critical performance, appearance, and material characteristics of a CAPA Certified part should mimic those of the car company brand part.’  What is meant by ‘Mimic’ shouldn’t it be LKQ Exactly like the same kind and the same quality.?”

We asked Klouser to see if CAPA is planning to improve its random inspection program besides simply responding to complaints. She responded by reiterating the details of the CAPA program.

“After a part has been certified, in addition to its Complaint program, CAPA continuously monitors part quality via in-factory inspections and testing randomly selected parts from the market for VTF and material testing,” Klouser wrote in an email. “We regularly audit the manufacturer’s quality systems and controls.  We understand that no manufacturing process or quality system is perfect- every process has variability.  Therefore while we have a rigorous in-factory inspection process as well as a market monitoring system in place, we will still rely on market feedback to identify issues as well.” Klouser hasn’t responded to Cobb, but her earlier email pointed to the CAPA Technical Committee’s role in determining LKQ.

Four of the 18 members of CAPA’s Technical Committee are collision repairers — Don Feeley of City Body & Frame, Jared Humphrey of Service King, Bob Keith of CARSTAR and Mark Sanders of Caliber. Four are insurers, four are manufacturers, three are distributors, and three are at-large members.

The at-large members include Dan Risley, head of the Automotive Service Association; Rod Enlow, head of RENlow Auto Technical Consulting and a former CCAR and USAA employee; and LNS & Associates President Nicholas Scheid, who has worked for Cornerstone Auto Parts and AutoTech Plastics.

Even if the at-large members and repairers voted as a bloc, it’d be 11-7 in favor of parties interested in seeing the most parts possible certified.

Klouser also invited him and anyone else to tour CAPA’s facility in Grand Rapids, Mich.

“In fact, our executive director, Jack Gillis would be happy to host you and some of your colleagues in Vermont for such a visit.  We’ve had many (if not most) of America’s collision repair leaders visit our facility, including some of the most outspoken critics of aftermarket parts.   Not only does this afford CAPA with a great learning experience, but nearly 100% of those visits have resulted in the knowledge that there is little difference in the goals of CAPA and of today’s collision repairers.   For our part we assure a candid, honest, fully transparent look at the program with no questions, concerns or issues brushed aside.   We hope you and some of your colleagues will take us up on this offer.   There’s certainly a great deal of angst, anger and concern about the issue of aftermarket parts, so we believe anything we can do, together, to improve the situation would be an investment well worth the time.  We hope you agree.”

In CAPA’s defense, part of why we can even raise some of these questions is because of such transparency and the fact that they’re doing any sort of check and balance (however controversial) on manufacturers. (Learn more about their and NSF testing here.)

About 75 percent of aftermarket parts aren’t certified, CAPA Executive Director Jack Gillis told a Morning Call columnist in 2015. Given the problems reported with certified parts, insurers, customers and shops should really think hard about what else is being sold, ordered, and driving around out there.

Correction: An earlier version of this report incorrectly identified a part lot number. CAPA decertified lots 07/13A and 06/14A of a generic Subaru radiator tie bar from Auto Power, and the article has since been updated to reflect this.