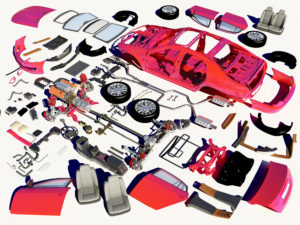 The “Promoting Automotive Repair, Trade, and Sales Act,” which dramatically cuts design patent protections for OEM collision parts, is back for the 115th Congress.

Previous PARTS Act bills were introduced in February 2015 by U.S. Sens. Orrin Hatch, R-Utah and cosponsor Sheldon Whitehouse, D-R.I., in the Senate and U.S. Rep. Darrell Issa, R-Calif., along with three other cosponsors in the House. The House version of the bill made it to a 2016 committee hearing but no further. The Senate version wasn’t heard at all.

“Any consumer that has been in a car crash or fender-bender has for decades benefited from competition in the collision repair parts marketplace between car companies and alternative parts suppliers,” Salamy said in a statement. “Even though car companies already control more than 70 percent of the collision repair market, they are using a little-known patent maneuver to grow their monopoly and stifle competition at the expense of consumers.”

“We need to address this important consumer issue now more than ever, and we urge Congress to move swiftly with these bills to preserve a 60-year tradition of free markets and fair prices in the collision parts industry and we thank the PARTS Act sponsors for their leadership.”

The Quality Parts Coalition has presented strong data showing the rise in OEMs design patents over the past decade. The coalition suggests this followed Ford enforcing seven design patents on the 2004 Ford F-150, and design patenting certainly starts to take off for a few OEMs around that time. 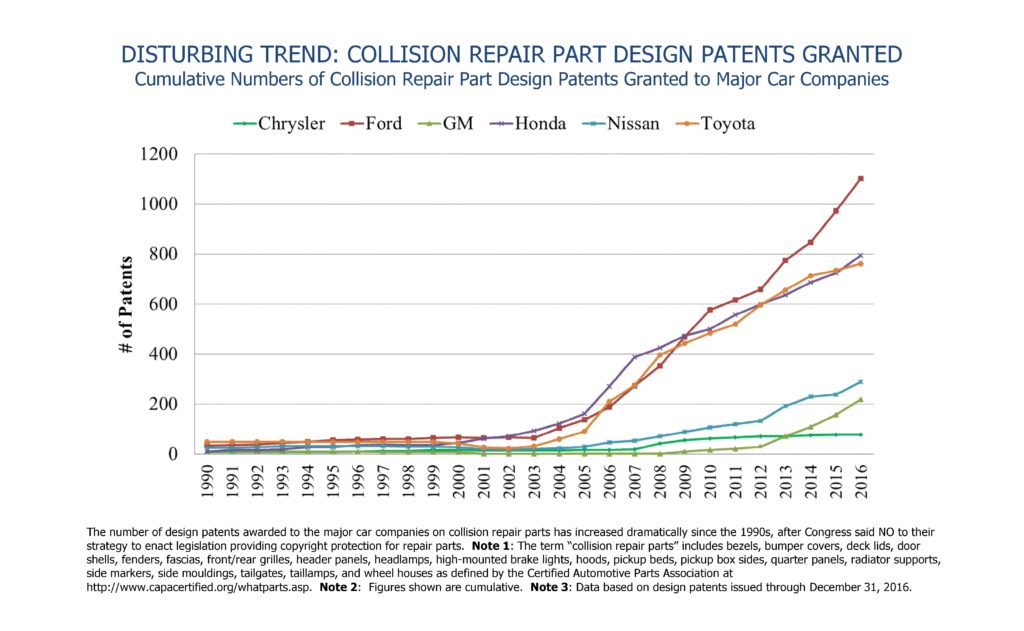 According to the QPC and bill sponsors, this protection unfairly keeps non-OEM competitors from copying the OEMs’ designs, costing customers money and choices.

“Purchasing an automobile is one of the biggest investments a family will make,” Issa said in a statement. “Yet according to AAA, one-in-three American drivers would be unable to cover the costs of an unexpected car repair bill without going into debt. As car insurance rates rise at their fastest rates in more than 13 years, families deserve access to as many options to make these fixes as possible. The PARTS Act increases consumer choice, encourages competition, fosters innovation and will be a big win for consumers by driving down the costs of these often very expensive repairs.”

“There is no reason why Americans should have to pay unreasonably high prices to repair their cars,” Hatch said in a statement. “Drivers and insurers should be able to shop around for the best deal rather than being locked into a small number of options. The PARTS Act will encourage competition in the marketplace by providing consumers with a greater choice of affordable, quality alternatives to repair their cars.”

We’ve pointed out some of the fallacies in such arguments in other articles (as well as supporter responses), and we’d refer readers to that coverage, but to summarize:

Savings: The average premium only rises about $19 without aftermarket parts, using the “save consumers $1.5 billion every year” tally and PCIAA data cited by the Quality Parts Coalition. This assumes all savings are passed on to consumers.

Quality: CAPA’s initial rejection rates, parts return rates reported to BodyShop Business and other repairer and OEM complaints suggest that aftermarket parts quality isn’t a given. One major insurer in Australia has been testing using only OEM parts, drawing praise from an automaker trade group which has shown flaws in aftermarket components.

Consumer choice: The aftermarket replacement collision parts industry is driven by carriers, which pay for roughly 70 percent of collision repairs. They’re the ones clamoring for the parts and mandating them under policy language. The marketplace hasn’t really tested if customers would or wouldn’t buy them or pay the difference out-of-pocket..

However, even if customers did want a lower-cost option, this could be obtained without violating design patents. There’s a robust parts recycling industry — used parts don’t infringe. Or an aftermarket manufacturer could copy the part and have it just look a little different, thereby removing the potential for design infringement. (Admittedly, this means one’s vehicle looks different, but that’s sort of the point of design patents — no one but the inventor can produce something with that appearance.)

Double standard: No other industry loses their 14- to 15-year design patent protections under the law — OEMs are singled out. Not only that, but while an OEM’s part wouldn’t be protected for more than 2.5 years, an aftermarket company’s would be.

The Patent Trademark Office exists: Companies have to get design patents approved by a federal agency. It’s not a given. Regulators must review the OEM designs to ensure they aren’t too broad or rip off someone else’s idea. Whether the PTO is too lax is certainly a fair question, but there is a mechanism in place to ensure OEMs or any other inventor/designer abuses the system.

The Quality Parts Coalition on Tuesday expanded on a more intriguing argument we’d heard for the prior iteration of the bill. Its news release featured DePaul professor Joshua Sarnoff, an expert on intellectual property, who argued that design patents were never intended to apply to individual parts of a vehicle — only the car as a whole. The judicial system was wrong to find otherwise, he said.

“Congress did not intend or foresee partial-product design patents when it originally enacted the design patent law,” Sarnoff said in a statement. “Using such patents to shut down the after-market in exterior collision repair parts was made possible only by judicial activism to over-extend patent protection, and these new partial-product design patents conflict with the historic consumer right to repair purchased, patented motor vehicles to their original appearance.”

“The PARTS Act provides a limited solution to the problem, similar to the way Congress has remedied other patent problems created by courts. Specifically, it makes clear that making, offering for sale, and importing legitimate repair parts should never be considered infringing conduct, and it strikes a temporal balance with regard to the sales and use of such parts for legitimate repairs, limiting the infringement right in such cases to a short period, so as to avoid the need to distinguish permissible repairs from impermissible reconstructions.”

What’s unexplained is why carving out exemptions for one group after another is preferable to just changing overall patent law to give all design patent holders only 2.5 years. It’s also unclear why the partial-product design patents Sarnoff argued resulted from an egregious judicial overreach should be allowed to stand for those 2.5 years rather than be banned altogether.

The “Promoting Automotive Repair, Trade, and Sales Act,” which dramatically cuts design patent protections for OEM collision parts, is back for the 115th Congress. (1971yes/iStock)