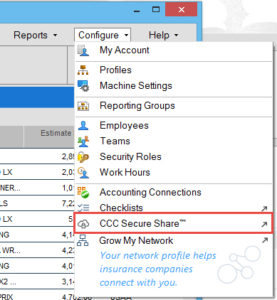 CCC said the volume of collision repair-related messages which will pass through its new Secure Share system wouldn’t give it an unfair informational edge over competitors for its ancillary products.

Besides its core estimating service product, CCC also sells shop management, parts procurement and customer service management tools — just like the vendors which will be using Secure Share to receive estimate data from CCC’s thousands of users. CCC will be in a position to see which shops are doing business with which rivals.

Under the obsolete CIECA Estimate Management Standard CCC plans to cease using in 2018, the estimating service sends repairers EMS files filled with all the estimate details. The shops in turns send these files to business partners who need elements of that estimate by manually uploading the file online or by having it sucked up through “data pumps” installed on individual shop computers.

Vendors with data pumps can indiscriminately vacuum up all EMS files — including ones for repairs in which they have no involvement — and all information within those files, not just the part of the message relevant to their industry. This raises tremendous customer and business privacy concerns.

Under CIECA’s Business Message Suite standard, a shop can send specific elements of the estimate to a specific party. Any shop and vendor with sufficient IT resources could adopt this method now, but for whatever reason and to CIECA’s dismay, many don’t.

CCC has created Secure Share, which went live April 4, to manage the process for the BMS holdouts and force the end of EMS. It allows shops to designate various participant companies to receive particular germane data from estimates but conceal the rest, and it will encrypt the data as well.

There’s obvious advantages for shops to using the BMS standard instead of clinging to EMS and in delegating the back end of this data exchange to CCC. However, Secure Share also seems to put CCC in a position to glean business-relationship and market-share data about its non-IP rivals by tracking how much of its dominant shop user base has interest in or sends data to those competitors.

EMS recipients had been configurable in CCC, but whether or not many of what CCC says is 19,000 Secure Share user shops actually took that step is debatable. CCC might only have known which repairers weren’t using its ancillary services — not with whom the shops were actually conducting business.

Under Secure Share, CCC can track which collision repairers are doing business with specific competitors to its own products. Based on CCC’s size — roughly 56-60 percent of the 33,000-odd shops out there — it should have an incomplete but still informational sense of competitor market share in relation to its own. This also would seem to raise the potential for CCC to target a specific rival’s customer pool with pitches on why CCC’s offerings are a better choice.

“As we give the customer control over the destinations of data, our product requires configurability be at their fingertips,” she wrote in an email. “So of course CCC ONE configurations related to CCC Secure Share will reflect the intended destination for data, but there may be multiple destinations for a given BMS workfile and how the customer ultimately transacts with a third party app is not known by CCC.  Data security is key to CCC and its customers and requires transactional security logs, so CCC does have exposure to BMS workfile transaction volume, in part anyway. Keep in mind, CCC Secure Share only represents a portion of a third party app providers transaction volume.  We do not believe that CCC will in any way competitively benefit from the information which is available to it and we believe these are essential elements of a data security program.”

‘I don’t see how that’s an advantage for us,” CCC Vice President of market solutions Mark Fincher said.

Fincher pointed out the existing ability of shops to direct certain EMS messages. “This is really nothing new,” he said.

With the system CCC was trying to build and its pricing structure, “there’s no way around” seeing who does business with whom, Fincher said.

Besides, CCC already knew the competitive landscape to some degree anyway, he said.