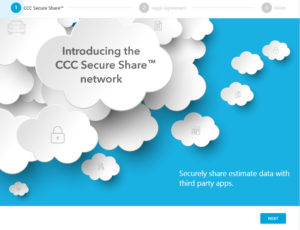 It’s part of CCC’s plan to eventually end the obsolete Estimate Management Standard messaging standard, which can send far more information than a specific vendor would — or should — need and raise privacy concerns. The independent Collision Industry Electronic Commerce Association, which developed both digital standards for collision repair software to “talk” to each other, hasn’t supported EMS for more than a decade and actively campaigns against it.

Beginning April 4, CCC allowed collision repairers to transmit both types of messages from their estimates. In April 2018, the company will cease exporting EMS messages altogether.

A rental car company, for example, doesn’t need to know what parts you’re ordering. By installing an EMS “data pump” on your computer, it’s possible they could have received that data –unencrypted — anyway.

CCC says Secure Share solves three industry problems. It gets rid of EMS and switches to the supported and more secure BMS standard. It makes it easy for shops to control recipients of their and their customers’ data. And it lets vendors which might have otherwise had to set up an EMS data pump on each individual client or prospect’s computer immediately have the ability to handle or win business from CCC’s more than 19,000 repairers, with CCC handling the back end. (BMS files are XML compared to dBase, which is also arguably easier to use by software developers as well.)

However, critics have complained about CCC’s eventual $0.50-per-repair fee for vendors (waived through April 2018) and the eventual loss of an EMS file to send to vendors who don’t want to use CCC. CCC handles the data transmissions and says it charges a fee in part to cover the expenses of setting up the infrastructure to do so.

One is A1 Body and Frame’s internal shop management service software Collision Forge. Owner Patrick Frea could not be reached for comment.

“He’s primarily using it for himself,” Fincher said, but described Frea was curious to see if he could commercialize the software beyond the “handful” of current users.

“’I’m aware there’s a fee and I’m fine paying a fee,'” Fincher described A1’s position. Eliminating the cost and hassle of setting up EMS infrastructure was worth it to the developer, according to Fincher.

The other is QCIQ, developed by Fix Auto USA franchisee and software developer David Caulfield.

Caulfield, CEO of myQCIQ.com, said he had been using the quality control software within his California Fix Auto USA shops but was interested in opening it up to a wider market. 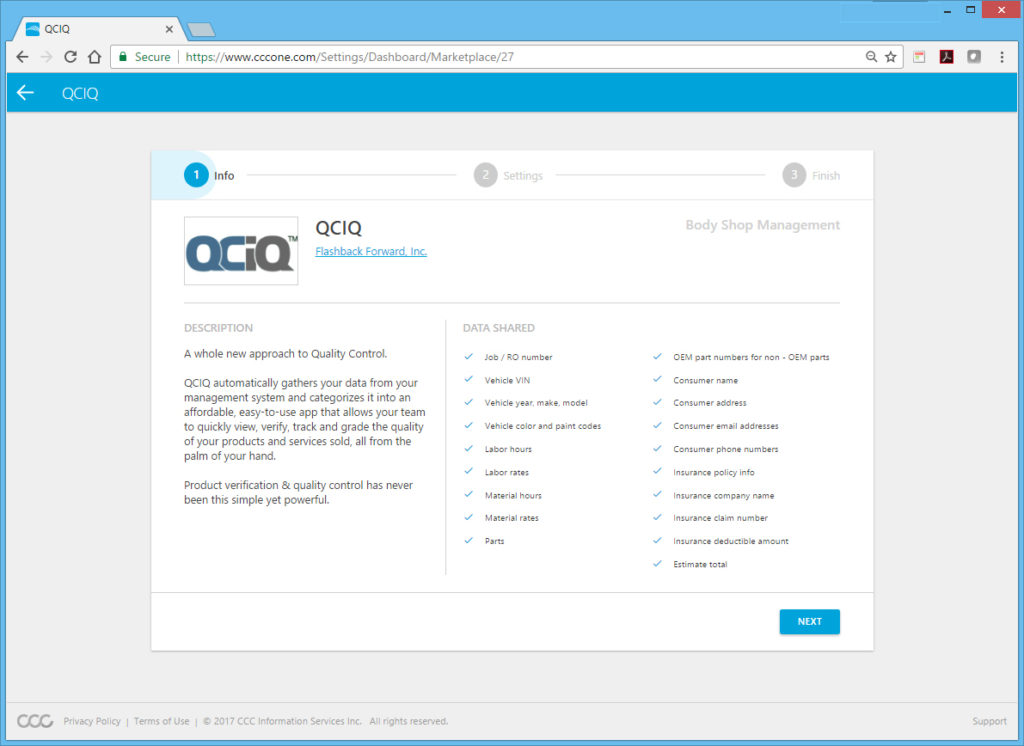 Despite little publicity from CCC or Caulfield, QCIQ in less than 10 days has connected to more than 60 leads on Secure Share.

Caulfield he knew only about eight to 10 of the Secure Share shops, those in the Fix Auto USA network. The rest were strangers, he said. Only two of what he estimated was a total of 65-67 had called, and only a few others emailed. The rest just signed up through Secure Share.

For an entrepreneur, Secure Share is a highly attractive way of reaching new customers, according to Caulfield, who called it “low-hanging fruit.”

He said it’s made him rethink the timetable for future projects and thought Secure Share “encourages the investors of the world to go ahead and take some risk.”

“It doesn’t matter who you are,” Caulfield said earlier. “… It’s not the ‘good old boy network’ anymore.  … They’ve (CCC) allowed that playground, and I think it’s pretty cool.”

QCIQ’s website indicates the company will receive EMS messages through Mitchell and BMS through CCC (Caulfield said he likes working with both companies). However, the EMS process described does help support CCC’s argument for the convenience of Secure Share.

“Repair data imports directly from your estimating system. CCC data will come directly via SecureShare™. Mitchell™ International data will be provided via an EMS data-pump, installed separately,” QCIQ states. The company’s pricing page describes a setup that “includes assisting with Mitchell™ International EMS data pump installation. IT cooperation expected and provided by shop’s IT personnel (30 minutes of their time is typical and should be expected.)” 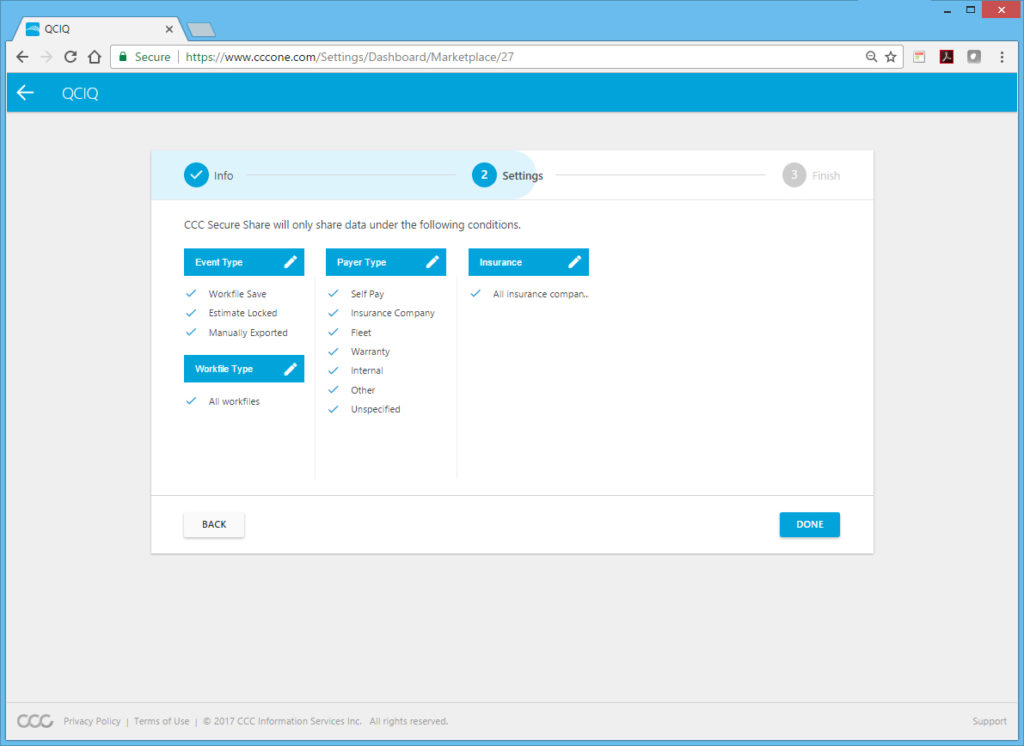 Asked about the 50-cent vendor fee for receiving estimates through Secure Share, Caulfield said there was a long time between now and when CCC began to levy fees in 2018. “I think it’ll be positive,” he said, and likely there’d be “give and take on both sides” between now and 2018.

He didn’t think CCC would want to see Secure Share developers shedding customers by having to pass on such charges.

Like QCIC, Collision Forge is being run in “test mode,” according to Fincher. Shops can send it data, but the company is holding back for now.

There have been no technical issues on CCC’s end, though Fincher pointed out that it’s a “very small amount of traffic” compared to what it ultimately hopes to do with Secure Share.

“Everything’s been working great,” he said.

So where’s everyone else? Fincher said that “well over 30” companies have registered and are in the process of developing apps for Secure Share. After conversations with “95-plus percent” of those companies, CCC anticipates more should be launching within the next two months, according to Fincher.

Fincher said he hasn’t heard of any CCC users wondering when they’re going to get more vendors. However, he described some MSOs as “very excited,” and anticipated Secure Share’s vendor population would increase once shops started demanding their business partners get on board.

Fincher said “we’ve had a couple” of inquiries from other developers, but nothing significant over the past month.

As noted above, CCC hasn’t drawn much publicity to the launch; it’s waiting until more apps appear to start heavier promotion, according to Fincher.

However, “a lot of shops have found it” anyway. The system can be accessed under CCC’s “Configure” toolbar option. 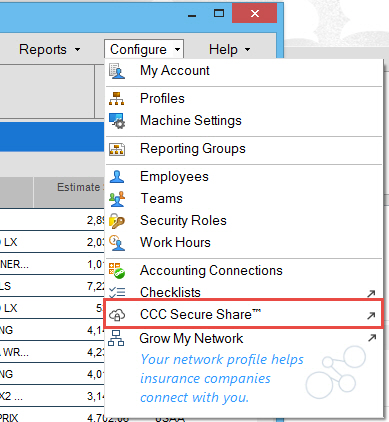 The company also could draw more attention to the system through push notifications, but Fincher said it’d probably refrain from alerting shops every time a new app appears. “That might get kind of aggravating,” he said.

A CCC dashboard prepares users to interact with its new Secure Share program. (Provided by CCC)

QCIQ is one of the two “apps” available on CCC’s Secure Share program as of its April 4, 2017, launch. (Provided by CCC)

QCIQ is one of the two “apps” available on CCC’s Secure Share program as of its April 4, 2017, launch. (Provided by CCC)