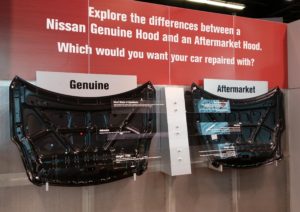 Jalopnik on Friday carried an interesting piece on the total lack of certainty that surrounds various price points of mechanical service and repair parts selected by a DIYer.

How can a customer evaluate whether a certain price point or “premium” status of a non-OEM part really delivers the appropriate quality? author David Tracy wonders:

We buy the cheap part, feel guilty and pray it works, or we buy the mid-priced or expensive one hoping that the upper-tier price means it must not be junk.

This isn’t a good method of picking parts, but the reality is that I’m not going to get any field data on head gasket longevity anytime soon. I can try to email the manufacturers and compare the data sheets, or I can look for comparison tests from independent testers online, but even that likely won’t get me anywhere. The only thing I can really do is read reviews from Amazon, Ebay and—my favorite—car forums. If 50 people say the part is decent, there’s a chance it’s not total junk. Then I can save some money, buy the cheap part and still sleep easy knowing it won’t blow up my motor or send me careening into a tree.

Deciding on decent parts is made messier by branding, as I often come across a store-branded part that’s exactly the same as the Ebay part. Or are they the same? If I put them side-by-side, the parts look identical. And indeed, the materials may also be identical. But one may have come from a company that takes quality control seriously, while the other brand may have just phoned in the QC. So can I trust the reviews for one product to represent another re-branded product that looks exactly the same?

… But the bigger point here is that when even I—with a fairly solid understanding of what each car part does and how critical it is to keeping me safe—have little more than a vague understanding of whether I’m risking my life or getting ripped off, you know this Wild West car parts business is too damn confusing.

Similar issues exist in the collision repair industry for any part that isn’t new OEM. However, unlike Tracy and his fellow wrenching readers, the customer might not even be aware they’re getting such parts and rolling the dice in this manner.

For example, the types of suspension parts described in the story also might be replaced with equally dubious alternative parts during a collision repair.

However, with the exception of the 30 percent or so of repairs that are out-of-pocket, such parts selection in collision repair likely is at the insistence of an insurer who isn’t necessarily a qualified collision repair professional — or even a knowledgeable DIYer like the Jalopnik author and readership. It’s doubtful that an adjuster selecting an aftermarket, recycled, opt-OE or remanufactured part based on price is bothering to do any of the research Tracy describes in the article besides maybe checking for the existence of external certification.

Whether such third-party certification truly allows a part to be considered identical to an OEM’s is debatable, but at least in some cases it exists and, ideally, is done transparently enough to be evaluated. However, with cycle time ticking away, is an insurer or shop bothering to dig deeper into the rigor of that certification or that a particular “certified” part even met the certifier’s own standards?

The next line of scrutiny would be the shop itself — which might not have wanted to use anything other than non-OEM parts in the first place. If the shop doesn’t want to make waves, research the part, or run afoul of a KPI penalizing them for using too many new OEM parts, then it would seem to fall upon the customer to do his or her own research.

However, unlike our Jalopnik DIYer, the customer is arguably trusting the shop and insurer to make the right decisions for their vehicle — assuming the customer even realized from the fine print on the estimate and insurance policy that such parts were even being put on their car.

Two out of three parties in the collision repair described above arguably don’t have Tracy’s “fairly solid understanding of what each car part does and how critical it is to keeping me safe.” That condition combined with the shop’s inherent responsibility for the proper repair of a customer’s vehicle places a great deal of parts responsibility upon a collision repair professional. If that professional has the same uncertainty as Tracy about the quality of parts out there, how well are they truly serving customers by failing to voice those concerns?

“The World Of Aftermarket Car Parts Is Confusing And Dangerous”

Featured image: Nissan at NACE 2016 presented an older display of another aluminum hood erroneously duplicated in steel (and weighing 30 pounds more) by an aftermarket producer. The steel version even had a warning label about the possibility of hood support failure. (John Huetter/Repairer Driven News)