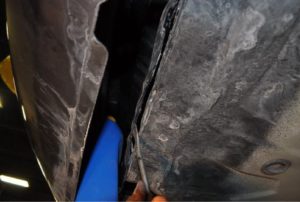 The Ohio First District Appellate Court last week upheld a more than $100,000 ruling against an Ohio shop which evidence showed failed to follow OEM repair procedures and performed “all around sloppy work” on a Nissan sedan, according to the original judgment.

Lange Technical Services’ Larry Montanez, who appeared as an expert witness in Jeremy Williams v. Sharron Woods Collision Center, called the work on the car in question “a very crappy repair” in an interview Monday. He also stressed the insurer covering the repair “had nothing to do” with the repair issues found.

The shop is no longer under the same ownership. “We don’t have anything to do with it (the case),” a representative of what is now Sora’s Sharon Woods Collision Center & Service said Monday.

All references to “Sharon Woods Collision,” “SWCC” etc. throughout this story and the litigation refer to the facility under prior owner Bernie Burckard, not today’s Sora’s Sharon Woods, which is owned by the Sora family.

Messages for Sharon Woods Collision’s counsel mid-Monday afternoon had not yet been returned.

The jury awarded damages of $8,079.78, but Hamilton County Court of Common Pleas Judge Mark Schweikert then agreed to Williams’ motion for treble damages, attorneys fees and costs — which added nearly $100,000 more to the shop’s tab.

“SWCC (Burckhard’s Sharon Woods Collision) represented to consumers that it performed all repairs to automotive specifications with the intent to restore vehicles to their preloss conditions, and that its technicians were trained and certified in the latest automotive advancements,” Judge Russell Mock wrote in the Friday appellate court decision upholding the $105,462.59 judgment. “It also represented that it had gold class certification by I-CAR, a recognized industry training organization, and that it repaired vehicles according to I-CAR guidelines.” 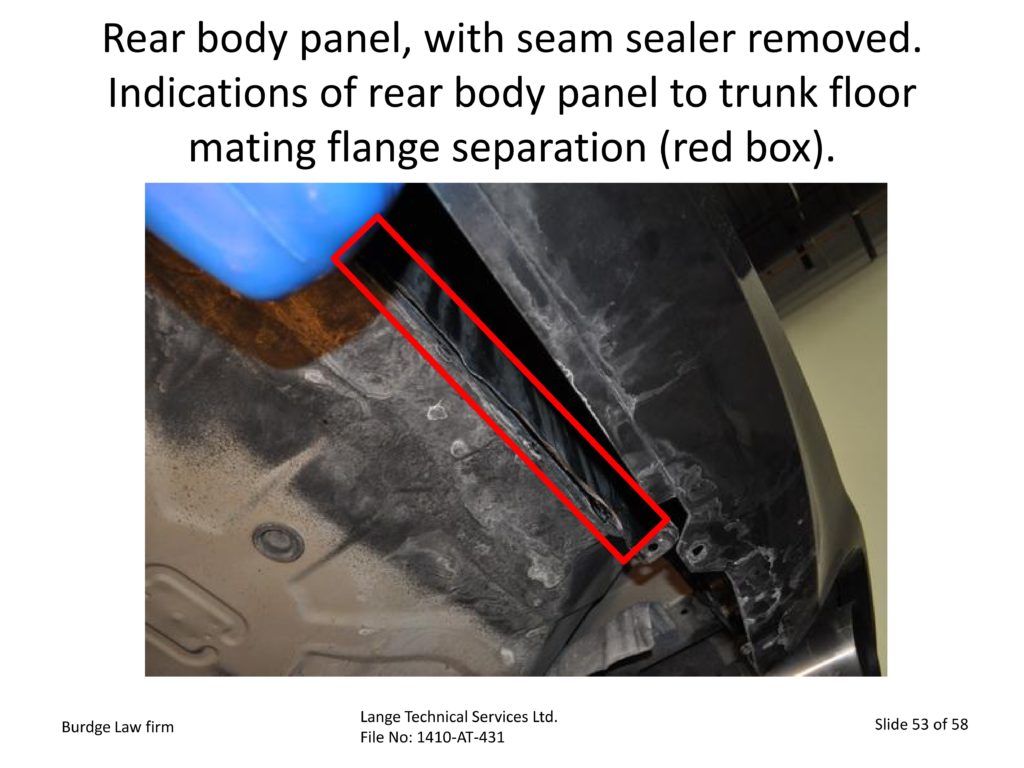 The shop incorrectly used structural adhesive to glue panels to the Maxima, “a method which was not approved by the manufacturer or appropriate under I-CAR guidelines,” according to Mock.

“Williams presented the testimony of three experts (Montanez, Mike Anderson and David Williams), who all testified that the car was not repaired in accordance with Nissan’s specifications or I-CAR guidelines, that some repairs in the estimate were not completed, and that the some of the repairs had been done in an unworkmanlike and sloppy manner,” Mock wrote.

“SWCC presented testimony from Bernie Burckard, President and sole shareholder of SWCC and experts, David Damon and Geoffrey Overley, who inspected the vehicle and testified the vehicle was repaired in a workmanlike manner and the utilization of an adhesive bond, although, not specified by Nissan, was not specifically prohibited and that adhesives were used in the industry for corrosion protection, in addition to their adhesive quality and had no effect upon the integrity of the repair,” the shop wrote to the appellate court in January.

• The evidence showed that repairs to the rear body panel were not performed in a workmanlike manner because: (1) they were not performed according to the manufacturer’s specifications because structural bonding adhesive was used where not approved by the manufacturer, Nissan, (2) the welds were extremely poor, not in locations prescribed by Nissan, and the wrong types of welds, and (3) improper corrosion protection was applied.

• The evidence showed that the repairs were all around sloppy work.

• The evidence showed that sloppy, shoddy, and improper repairs to the rear body panel made the vehicle unsafe to drive. (Minor formatting edits.)

Schweikert ruled that Williams had “overwhelmingly prevailed on his claims with the jury” that the body shop misrepresented itself and its repair quality and “did repair the vehicle and return it to the Plaintiff in an unsafe condition.”

“In this case expert evidence showed the improper installation and repairs to the rear body panel rendered the vehicle unsafe to drive when it was returned to the Plaintiff,” Schweikert wrote. 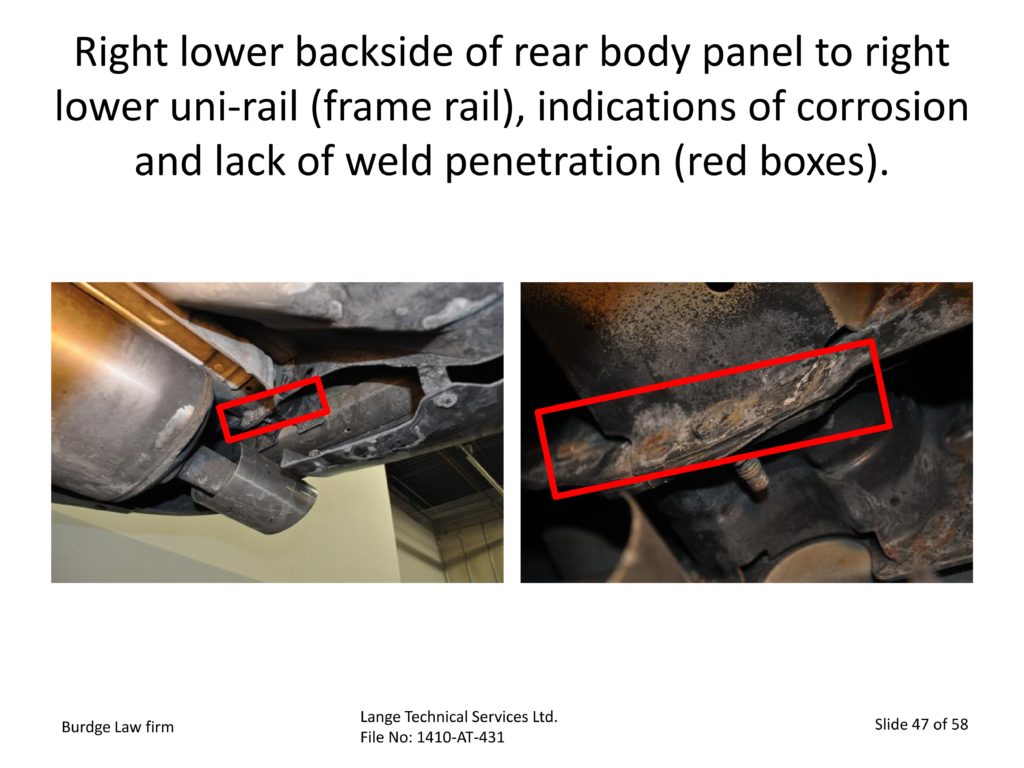 Montanez said he was able to pull the rear body panel off by hand with a tiny ballpeen hammer and a gasket scraper. He was able to make a gap wide enough that an antifreeze bottle could fit between the floor pan and rear body panel, he said. He recalled the adhesive was still sticky and wet, similar to butyl tape.

Had Sharon Woods Collision glued the rear body panel on correctly, the repair would “still be improper” but probably be safe, Montanez said Monday. He recalled noting in court that “‘They couldn’t even do a good bad repair.'”

While the exact reason for the adhesive failure was unclear, Montanez speculated Monday it might have expired or been applied with the incorrect tip. Some tips are microscopically engineered to mix the adhesive and activator hundreds of thousands of times, he said.

“They just glued it on the wrong way,” he said. 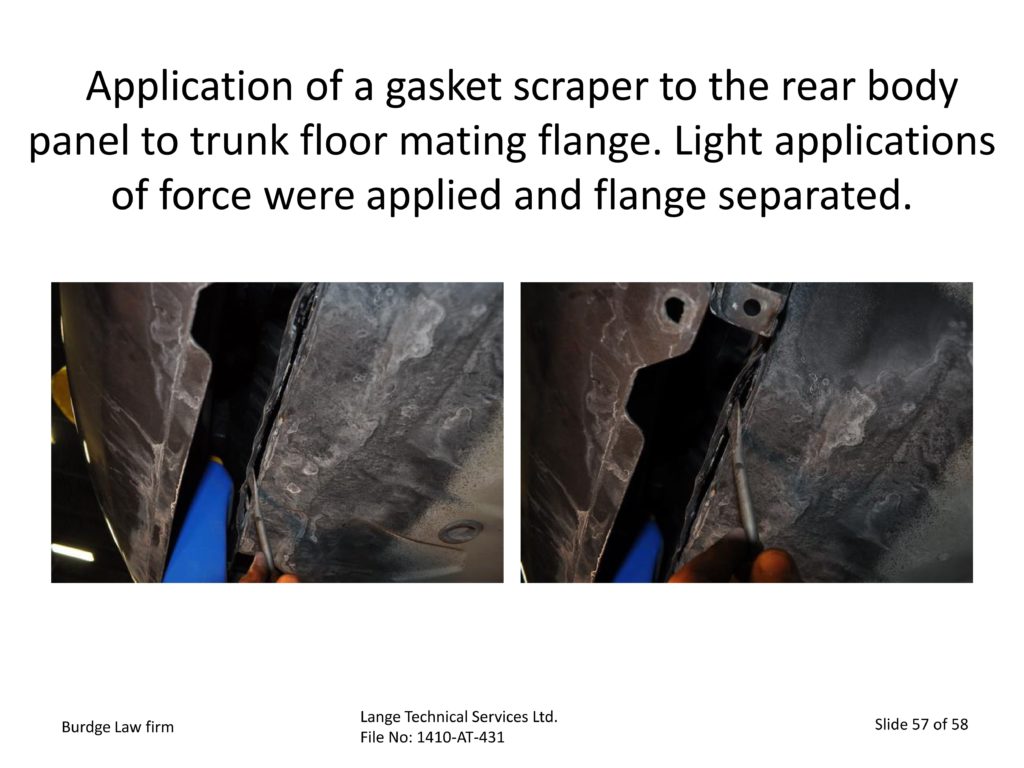 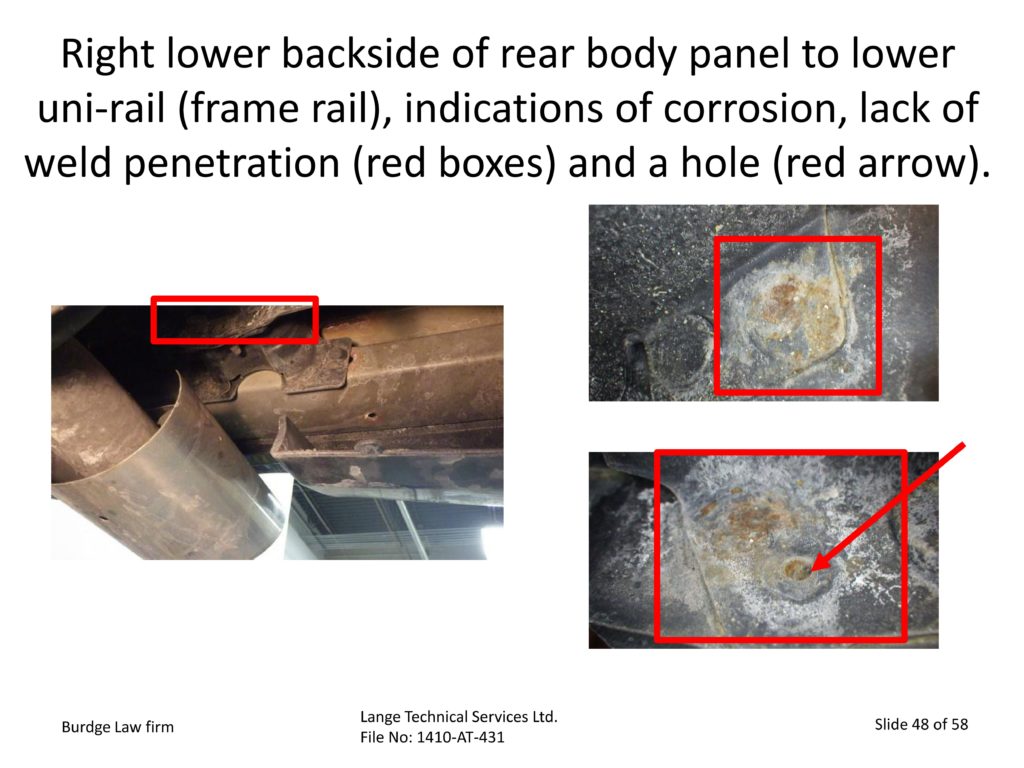 Lange and Montanez also reported a series of other issues.

Some gaps were out of tolerance, notably hood to bumper fascia gaps of “11mm on the left side, 14mm in the middle and 7mm on the right side,” according to the report.

“Hood to fascia gap should be 4mm to 6mm,” Montanez and Lange wrote. “Multiple plastic retaining clips were used and in need of replacement, as the clips did not hold the fascia snug to the frontal components. We lifted the fascia up and pushed it rearward and acceptable gaps and fit were achieved. …

“The left and right mounting retainer clips (on the lower rocker panel) were worn and not seated tightly, causing the front fascia to move easily and sit forward and downward. Movement of the front fascia was 10mm to 12mm, this is the root cause of the misalignment of the upper area of the front fascia to the hood, fenders and headlamp assemblies. The right front fender splash shield to engine cradle-mounting strap was separated and missing. This is causing the shield to flap back and forth against the lower front uni-rail, during operation, causing a slapping noise.”

Gaps in the rear of the vehicle were also incorrect, likely because of the collision, the Lange Technical Services report stated.

“Measurements taken of the lower areas of the tail lamp gaps to the quarter panels revealed a gap of 6mm on the left side and a gap of 5mm on the right side,” Montanez and Lange wrote. “The tail lamp panel gap should be even and 1mm to 2mm. The mounting bolts on the lamps were tight and this misalignment shows evidence to suggest the left and right tail lamp mounting panels are deformed forward. This misalignment would be anticipated due to the applied collision impact forces to the rear body panel. This misalignment also shows evidence to suggest the vehicle was not mounted in a structural realignment apparatus, corrective realignment pulls, and trail fitting of replacement components and/or measurements were not attempted.” 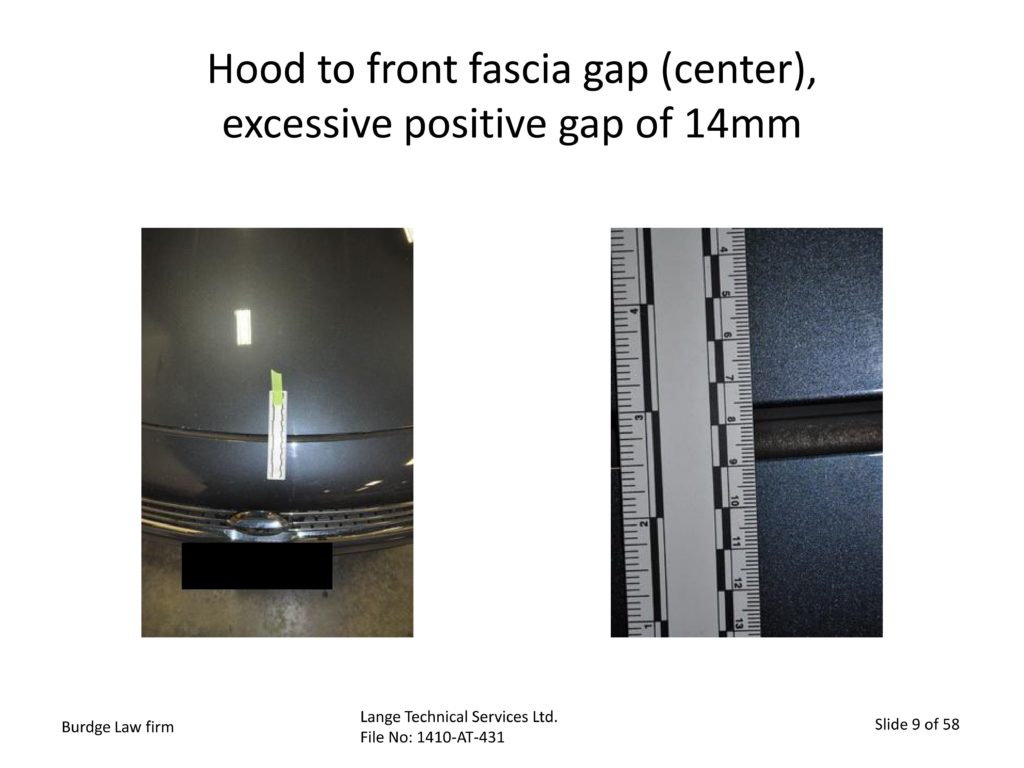 The trunk area and rear body panel also had the wrong seam sealer, they wrote.

“Multiple indications of a sprayable type seam sealer application to the spare tire well and to the rear body panel to trunk floor panel mating flange were observed, the report states. “According to Nissan, repair information the spare tire well should have sound dampening pads installed. Sprayable seam sealer is utilized for underbody/undercarriage repairs. The seam between the rear body panel and truck floor panel should have pumpable/brushable seam sealer applied and not sprayable material.

“The left side remote deck lid release cable-mounting clip was separated and a tab was missing from one of the sides. The rear body panel to truck floor panel mating flange showed evidence of sprayable seam sealer and inconsistent and uneven applications of pumpable/brushable seam sealer. Examination of the underside backside of the rear body panel to trunk floor panel revealed multiple areas of corrosion and lack of proper weld fusion to the area where the panel mates to the left and right lower rear uni-rails. No evidence of corrosion resistant primers was observed. Additional examination of the area revealed multiple 1/8″ of an inch (3mm) drill holes unfilled.” 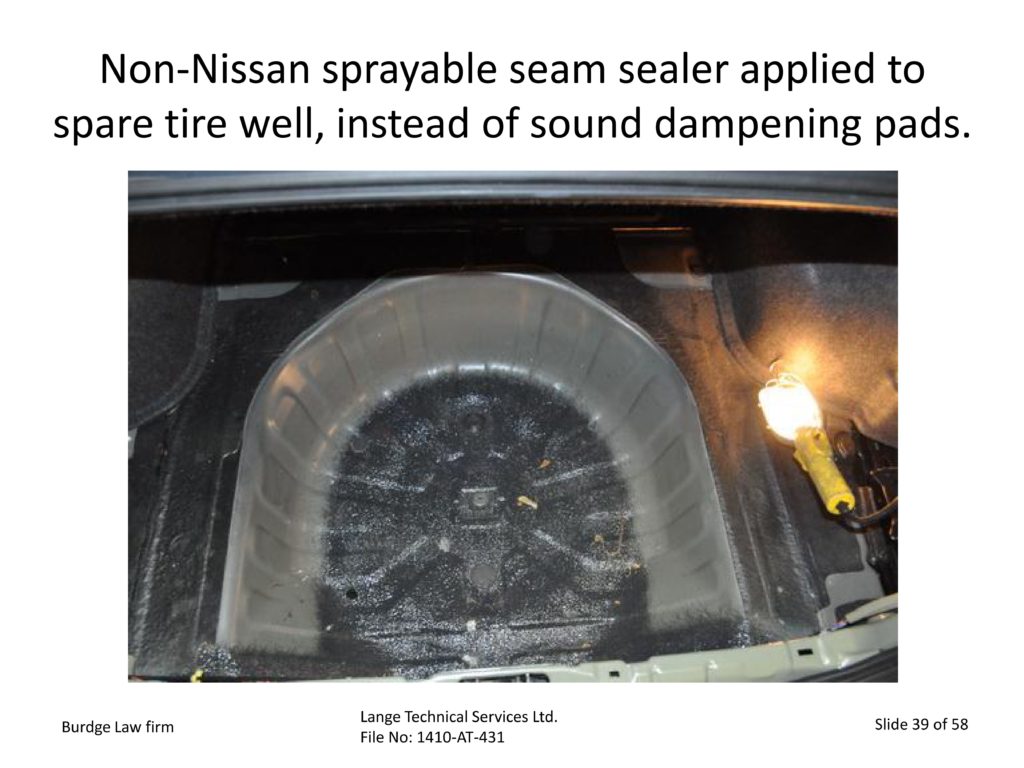 Other issues included a missing air conditioning line mounting bolt, a color mismatch and fractures and missing pieces on a trunk trim panel upper mounting clip, according to the report.

“Review of the expert reports, supplied by Sharon Woods Collision Center, submitted by Mr. David Damon and Mr. Geoffery A. Overley are incorrect in their analysis and in their theory,” Montanez and Lange wrote in their report. “Both state that the repair has made the vehicle stronger than originally designed, by meeting or exceeding the quality of repair procedures. Additionally, they both state that the repairs were very high quality and in a workman like manner.”

The shop also didn’t seem to have performed some of the operations it had itemized in the estimate, according to the report.

“No evidence of any mounting clap markings were observed to the mounting flanges on the left and right side,” Montanez and Lange wrote. “No indications of attemped repairs, the mating flanges were unremarkable. Additional examination of the underside revealed no idications of hooks or other items placed in to any other area to hold the vehicle. There is no evidence to support the vehicle was mounted on a structural repair apparatus and structurally realigned, although the final invoice from the repair facility, Sharon Woods Collision Center, Inc. included a charge for ‘Set-Up and Measure’ for two hours and a charge for ‘Unibody/Full Frame Pull & Square’ for three hours.”

Montanez also recalled Monday that a 3-hour line item to repair adjacent panels also lacked some of the possible indications that work had occurred.

Montanez called the absence of work applicable to an estimate labor time the reason why the court, according to Schweikert, found a CSPA violation in “That the Defendant did charge for labor based upon an estimate of time instead of the actual time taken to perform the repair.”

The issue here wasn’t the use of an estimated time, Montanez explained. It’s that the shop didn’t appear to have performed work listed on its bill.