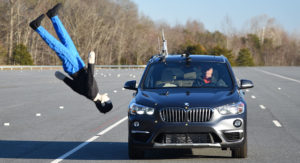 The technology is another ADAS element to potentially restore and recalibrate, though it’s likely that at least some of the sensory equipment will be part of systems or suites already on vehicles.

“In general, pedestrian detection systems use a forward-facing mono camera or stereo cameras mounted near the rearview mirror plus radar sensors in the vehicle’s front grille to continuously scan the roadway and horizon for pedestrians and, in some cases, bicyclists or animals, who might cross the vehicle’s travel path,” the IIHS wrote Feb. 21 in discussing its new ratings. “Algorithms classify the objects as people, bicyclists or animals, predict their travel path and determine the vehicle’s speed in relation to them. If a collision is imminent, the system typically alerts the driver and can apply the brakes far faster than a human could react.”

Collision repairers should pay special attention to this technology because it represents a significant shift in responsibility and potential liability. Your work has expanded from systems first intended to protect the customer paying you and their vehicle’s occupants to technology meant to protect someone else you don’t even know.

Sure, the driver of the vehicle still will carry the responsibility for driving safely and the bulk of the blame for a pedestrian-vehicle crash deemed the vehicle’s fault. But the victim or their heirs — to say nothing of the vehicle’s driver — could potentially sue a shop for disrupting a system which would have prevented the collision. Even if none of them make the connection, an insurer seeking to subrogate might. Read more on this concept with our previous analysis here.

The IIHS isn’t rating vehicles on how well their structures protect a pedestrian’s body in a crash — something its Euro NCAP testing counterpart does today. However, some vehicles are bringing features like autopopping hoods to the U.S. and making them standard anyway.

“Roughly two-thirds of front crash prevention systems offered on 2019 models have pedestrian detection capabilities,” the IIHS wrote. “Many of these also can detect and react to bicyclists and, in some cases, animals, although IIHS didn’t assess these capabilities.”

Two of the tests involve the vehicle traveling 12 mph and 25 mph and encountering an adult or child dummy walking perpendicular to the car. An adult pedestrian traveling perpendicular to the car from the right side of the road is the most common kind of crash in the real world, the IIHS said. The child test simulates a kid emerging from behind two parked vehicles and is the most difficult test, according to the IIHS.

The last test occurs at 25 mph and 37 mph and involves avoiding hitting a pedestrian walking parallel to the vehicle in the travel lane at the edge of the road, their back to the traffic behind them in the lane.

The IIHS also gives credit to vehicles that can issue a warning to the driver at least 2.1 seconds before the parallel-adult 37 mph crash. (The CR-V and Forester were the only ones who pulled that off.)

In 2011, the IIHS concluded using 2005-09 crash data that pedestrian detection technology could lessen or stop up to 65 percent of the three most common vehicle-pedestrian crashes and prevent 58 percent of the deaths.

Pedestrian fatalities have been on the rise over the past decade, with 2018 projected to have had the highest amount of deaths since 1990, according to the Governors Highway Safety Association. If you’re like us, you automatically thought of blaming smartphone use by drivers and pedestrians (the iPhone came out in 2007), but the GHSA pointed out that this was just one of many potential contributing factors, including more SUVs on roads (more likely to kill a pedestrian than a car) and even more people walking to work.

An initial round of IIHS testing of its new pedestrian detection protocols gave the highest rating, “superior” to the 2018-19 Honda CR-V and the 2019 Subaru Forester, Toyota RAV4 and Volvo XC40. (Provided by IIHS)

Pedestrian fatalities have been on the rise over the past decade, with 2018 projected to have had the highest amount of deaths since 1990, according to the Governors Highway Safety Association. (Provided by GHSA)