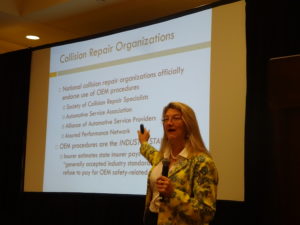 “Let’s be strategic,” said Eversman, who spoke to the industry April 17 following her first National Association of Insurance Commissioners summit as a consumer liaison. Besides those advocates, the tri-annual gatherings draw insurance commissioners from every state, regulatory staff — and many, many insurance industry representatives.

But “‘the collision repairers — they’re all over the place,'” Beck said, according to Eversman.

“‘They just can’t get it together about what they want'” or what solution they desire, he said, according to Eversman.

“He’s not wrong,” said Eversman, who has helped collision repairers for years and is chief counsel for Vehicle Information Services as well as the founder of the Automotive Education & Policy Institue.

The auto body repair industry is “the most disjointed, nonunified industry I’ve ever seen,” Eversman said.

She said she still hears shops refuse to share what they’ve learned by paying an attorney, arguing that any repairers should do the same if they want those answers. This is “idiotic,” she said.

“We have to be united,” Eversman said, noting that industry icon Sheila Loftus said the same thing years ago.

That’s what’s a insurance commissioner is also saying, she said.

The industry must stop “the ‘cowboy’ approach,” Eversman said.

Eversman acknowledged that labor rates were a major problem for the industry. “I get that,” she said.

But the angle to pursue with regulators was safety and OEM procedures, according to Eversman.

“They get that,” Eversman said. It’s a consumer issue, she said.

Eversman earlier in the talk recalled giving a presentation encouraging the NAIC to examine the issue of OEM repair procedures. She said she first had to pitch her topic to the NAIC consumer liaison committee. The chair’s first comment: “‘Won’t insurance rates go up?'”

Eversman said she replied, “Well, they don’t have to.'”

The opposition dropped, and the vice chair said, “‘I think this sounds like a great presentation.'”

She said she focused on the idea that insurers need to pay for OEM repair procedures that affect safety.

Eversman said she pointed out all three major collision trade groups call OEM procedures the proper way to fix a vehicle and tried to drive home that the industry standard is the OEM procedures. She said she also mentioned that the OEMs agree that’s how they want their vehicles fixed.

“I got a lot of interest,” Eversman said.

Advocates might also demonstrate that an auto insurer’s failure to pay for OEM repair procedures could hurt other insurers, based on Eversman’s speech. She mentioned health and garagekeeper’s insurers as two types of impacted carriers.

Such an argument resonates when she talks to “insurance folks,” Eversman said. One carrier’s behavior in the auto insurance space could lead to higher rates for other insurance lines, she said.

Eversman also indicated repairers could help their cause by providing a solution to a DOI.

Insurers have people who can write up and submit favorable language an understaffed DOI can use, she said. “This is a significant vacuum that we have,” she said.