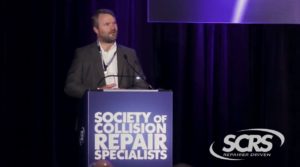 The Society of Collision Repair Specialists recently released video from two more IDEAS Collide talks, offering industry professionals who missed the “TED”-like presentations at SEMA another chance to check them out.

The latest round of video includes the 10-minute presentations from Matthew Doude, Mississippi State University Center for Advanced Vehicular Systems associate director, and Dan Langford, innovation director of the Nevada Center for Advanced Mobility of the Governor’s Office of Economic Development.

Doude and Langford between themselves touched on three of the four major automotive megatrends — connected, electric, shared, autonomous — impacting repairers now or in the next two decades. Langford particularly focused upon connected vehicles, while Doude — whose research center built an autonomous off-road Subaru — discussed the kind of crashes self-driving cars could produce.

Here’s some highlights from Doude’s video, posted to the SCRSCollision YouTube channel May 2.

0:10: Doude describes the self-driving 2014 Subaru Forester “Halo Project” at Mississippi State. Since MSU targeted off-road usage, the vehicle lacks the infrastructure support that typical self-driving cars would have, and it’s never navigated the environment it encounters before, Doude said. “It’s an interesting challenge,” he said.

1:13: Doude called himself a “quite a realist” on autonomous cars and doubted in the November 2018 talk we’d all have them in the next couple of years — “outside of certain regions.” “There are still challenges,” he said.

1:46: Doude explains the six SAE levels of self-driving cars, a helpful primer on the categories experts widely use to classify the technology.

4:40: Doude predicts that the lack of redundancy at higher levels of autonomy means fully autonomous cars would see a greater proportion of crashes at higher speeds. This could change vehicle body and interior design, he suggested. For example, “why wouldn’t adults be rear-facing?” he asked.

And here’s some highlights from Langford’s video, which SCRS posted April 18.

0:28: “The future of transportation’s incredibly data-heavy,” Langford said. Governments and OEMs might have thought they’d control the data, but companies’ sentiment is shifting to having an independent third party manage it. The idea of a “civic data trust” might become more prevalent, he said.

2:48: “All of a sudden, we’re getting a picture of what’s happening around the vehicle” during a crash, Langford said of data being collected externally from the vehicle. Nexar, for example, uses a cellphone like a dashcam but also collects heading and g-force information from a crash and provides that to insurers, he said. This sort of data could immediately be used to write an estimate and order parts, he said.

1:52 and 6:52: In the future, an autonomous vehicle collision might be thought of as a “failure event.” Something within the system broke down.

7:18: Langford said he personally didn’t think people would own self-driving vehicles like they do with regular vehicles. “It’s just not gonna be cost-effective,” he said. If ownership shifts to fleets, repairers might need to align themselves with a national fleet operator, Langford pointed out.

SCRS has released a third video as well from IDEAS Collide: the talk by
M. Scott Ulnick, principal of DuckerFrontier. Check it out here and get some insight about materials trends.

Featured image: Dan Langford, innovation director of the Nevada Center for Advanced Mobility of the Governor’s Office of Economic Development, speaks during IDEAS Collide at SEMA on Nov. 2, 2018. (Screenshot from SCRS Video on YouTube)