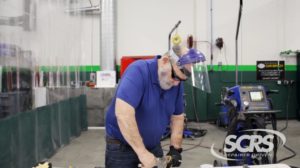 “It is important that you protect yourself” legally and get into a habit of test welds, SCRS educator Toby Chess (Kent Automotive) said on the short, 15-minute video posted to the SCRS YouTube channel.

SCRS Executive Director Aaron Schulenburg at an open board meeting April 16 suggested the free test weld worksheet might be laminated and kept with the welder.

Chess said during the April 16 SCRS board meeting that repairers tend to just assume they have good welds rather than actually test them. He showed procedures from Toyota, Nissan, Honda and Audi calling for that testing to be done.

“That happens,” Bradshaw said. “You see that all the time”

However, Chess noted during the April 16 meeting that the repairer would need to perform a test weld mimicking the conditions of the actual weld. For example, if the OEM called for a weld-bond, the test weld would need to include adhesive as well. The component removed from the vehicle slated to be replaced with a new part could serve as a test substrate as well, Chess said.

Boudreau also observed that some OEMs will tell repairers how they’d like a test weld to be performed.

In this vein, the new SCRS video stressed that the actual OEM procedueres would take precedence over the generic weld test demonstrated.

Chess demonstrated measuring the thickness of a substrate with either calipers or a metal thickness gauge. He held them together between the spot welder’s tips using pliers wrapped in electrical tape. Otherwise, the pliers might behave like shunt pliers, Chess said.

After applying the welds, Chess held the two coupons with two V-jaw pliers and pulled them apart to destroy the weld.

He measured the bead with calipers and described a rule of thumb of metal thickness multiplied by 5. (The video noted here that the OEM procedures would override the rule of thumb.)

The 0.7 mm metal would need a 3.5 mm bead under the rule of thumb. Chess’ came in at 4.2 mm, so it was acceptable. The 1 mm mild steel saw a nugget 4.6 mm wide instead of the 5 mm required, so Chess conducted a second test with another two coupons.

However, this time, he set the welder to 1.2 mm to deliver a stronger weld between the 1 mm pieces. This time, the nugget spanned 6 mm — within tolerance.

The third test with 1.4 mm high-strength galvanized steel and the welder set to 1.5 mm produced a nugget 5 mm wide.

“I have a little bit of a weak weld,” Chess said. The weld test would need to be repeated until a 7 mm bead is achieved.

Chess recommended using a permanent market to write the name of the technician, the repair order number and date on a coupon.

He suggested repairers document a successful weld test by taking photos capturing the calipers recording the nugget’s measurement and the written information about the weld.

In terms of overall squeeze-type resistance spot welding training, Chess referred shops to I-CAR’s WCS04 course and the corresponding hands-on class ST015L01. He said manufacturers often have training programs as well; it was unclear if this was a reference to OEMs or welding equipment manufacturers.

The Society of Collision Repair Specialists provided this image as an example of a photo documenting spot weld testing. (Provided by SCRS)