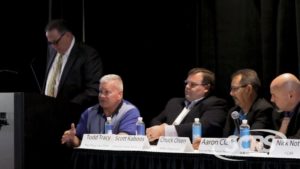 The Society of Collision Repair Specialists last month released video of a 2018 Repairer Driven Education panel on the critical topic of shop liability.

Repairers who missed the live event — it was held the same day as the Oct. 30, 2018, Collision Industry Conference — should take advantage of the April 11 replay to catch up.

One of the key lessons from the event seemed to be the dispelling of misconceptions around ways to duck liability.

For example, the notion that a customer signing a release will leave a facility free and clear.

“It may be used against the person (customer) who signed it,” Tracy said. But if your customer hits someone else because of your error, “those people didn’t sign off,” Tracy said.

In addition, “you cannot waive a child’s rights,” Tracy said.

“In theory, will it keep some people away? Sure,” Tracy said. But a lawyer would say, “‘This is worthless,'” he said.

Clark said he too had been informed by legal counsel that you couldn’t sign away another party’s rights.

How long could an owner be on the hook for the repairs? Tracy said “privity” — “a relationship with the entity” was typically required. An owner three vehicle sales away from the repair was “absolutely not going to be held accountable,” he said.

However, there would be a time where an “immediate owner” who sold a vehicle without disclosing a problem could “potentially have some exposure” within the more “liberal venues,” Tracy said.

Wouldn’t the repairer keep the same liability regardless of owner, Kaboos asked.

“Shop buys it all,” Tracy said. In a situation where the vehicle was repaired again, the first repairer had better be equipped with documentation as to what he or she did, he said.

“You better have a library of documents backing you up,” Tracy said.

Clark also warned that subletting a piece of work to a third party didn’t excuse the original repairer from liability. Ensure the subcontractor is trained, he advised, and Tracy suggested verifying the subletter had liability coverage and a garagekeeper’s policy listing the first shop as an additional ensured.

This coverage needed to be sufficient, according to Tracy. $1 million in coverage could be expended by a victim spending 15 days in an intensive-care unit, he said.

Clark recounted his own story of having to settle a case for more than $8 million after being held responsible for failing to perform certain operations. Fortunately, his coverage was sufficient to cover it, he said.

“I had no knowledge of it” and no proof the shop performed the work, Clark said.

“It will only take once for you guys to understand the magnitude and the scope of what we’re discussing here,” he said.

“… Frankly, you guys just have to make sure that you understand how to do it, and if you don’t, don’t do it. Your biggest friend, in the future, in my opinion, would be … your ability to say no.”

If your shop lacks the knowledge, equipment and relationship with a sublet vendor (if necessary) to complete the repair, than it’s not qualified, according to Clark.

“And there’s nothing wrong with saying, ‘I’m not qualified.’ … This is where the industry’s really stumbled a lot, in my opinion.”

As noted above, a shop who is qualified to perform the work and which does so correctly still needs to document the latter as protection against a day in court.

Clark said repairers do a good job of providing insurers and other parties evidence of what damage a vehicle sustained in a collision. But if they weren’t providing themselves or third parties with documentation of all those items being repaired, “you’ve done yourself a disservice,” he said.

Every line item should also have a “record of compliance” that it was fixed, according to Clark.

Assured Performance built a system to help shops document their work, according to Clark, who noted that the company didn’t put a limitation on how much documentation could be uploaded. “Whatever is necessary” could be stored digitally for the file, he said.

“One of these days, it may have an exhibit sticker on it,” Tracy said of a documentation file. It would either “save you, or crucify you.”

An exhibit sticker on a “single piece of paper” wouldn’t be enough, he said.

“In the absence of (something), you didn’t do it right,” Clark said.

“Understanding Shop Liability In This New Era of Diagnostics, Calibrations and Programming”