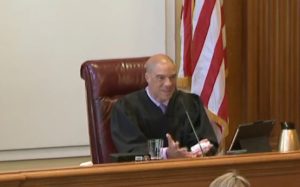 Ninth Circuit Court of Appeals Judge Paul Watford last week tried to pin down GEICO’s diagnostic scanning position during a hearing on whether to restore an Oregon lawsuit against the company.

Leif Hansen sued GEICO — and seeks class-action status — after it refused to cover diagnostic scans on his 2017 GMC Sierra 3500. According to Hansen’s complaint, despite General Motors’ directive to pre- and post-repair scan all vehicles, GEICO wouldn’t pay for $100 scans of the 3500 by Artistic Car Body because of the absence of a dash light. The truck had received rear bumper damage during a crash.

GEICO in Hansen v. GEICO argued successfully that a scan wasn’t damage to a vehicle it was bound to cover under the insurance contract.

“There’s no coverage” for pre- and post-repair scans, GEICO attorney Dan Goldfine said during oral arguments May 13. “The scan is not the damage to the vehicle,” he said later.

GEICO suggested it wasn’t obligated to pay for a test to look for new damage.

However, GEICO during the case also has acknowledged it does sometimes pay for scans anyway, and Watford seized upon this paradox during oral arguments.

“So you never, ever pay?” he asked GEICO attorney Dan Goldfine.

Goldfine said the record showed it did sometimes.

“So it is covered by the contract language,” Watford said.

The contract discussed “‘damage to,'” Goldfine said. (Note: We’ve presented excerpts from judges’ questions and Goldfine’s replies here to give readers a sense of the back and forth in court May 13; full questions and answers can be seen in the video above.)

Watford gave the hypothetical of a situation where the only way to detect damage was to perform a scan, the OEM called a scan necessary, and a repairer concurs.

“I appreciate the honor’s hypothetical, but that’s not what’s been alleged here,” Goldfine said.

“It’s not that far off,” Watford said, calling the only difference the absence of the body shop recommending a scan. (Though Hansen is a collision repairer, he’s here as a consumer; the view of the shop actually performing the work isn’t known.)

Goldfine replied that there was “quite a bit difference here” — in addition to the absence of a repairer viewpoint, no additional damage was alleged.

But “we can’t detect that by a mere visual inspection,” Watford said. He called the scan a “detection mechanism. It’s not a repair of anything.”

“What are the circumstances when you will pay for a scan?” he asked.

Goldfine said those details weren’t in the record, and “I don’t know” the answer.

“The scan doesn’t fix anything. That’s my problem with your position,” Watford said. The scan determines if more repairs are needed, Watford said.

“GEICO does not repair the car,” Goldfine said. “GEICO reimburses for the damage to the car.” There was no damage detailed in the record, he said.

“Your position is that you will never, ever pay for a scan,” Watford said.

“That’s not the position,” Goldfine said.

“Then tell me: When would you pay for a scan?” Watford said, saying he didn’t understand GEICO’s position.

“We would pay for the scan, assuming that the repair shop presented a legitimate reason for doing the scan,” Goldfine said.

So the key was the absence of a body shop recommending a scan be done? Watford asked.

“No. No. I mean, I don’t think that’s the key,” Goldfine said. Hansen wasn’t claiming any damage wasn’t covered, he said.

Later, Watford pressed him on the paradox of paying for scans despite a policy GEICO was arguing is limited to physical damage.

“Tell me again, why do you ever pay for scans?” Watford asked.

“There are occasions, when there is damage to the vehicle that relates and ties to the scan,” Goldfine said. That wasn’t the situation here, he said.

Asked for an example, Goldfine said, “the airbags deploy.”

“What about the engine light being on?” Judge Ryan Nelson asked.

Goldfine said an “engine light might be on if there’s an accident” but “most of the time” it indicated a mechanical issue.

Watford offered a scenario where a warning light appeared and the automaker said that were such a light illuminated, “‘you damn sure better do this scan,'” but no physical damage is visible on the vehicle.

“I’m asking you whether your company would pay for that,” he asked. “… I’m trying to figure out what you think this language means.”

Goldfine said GEICO sometimes would pay for a scan, Watford said. “Well, when?”

The car looked fine and was “running fine,” Watford said. No damage existed that was visible, but the light was on, he said.

“In your hypothetical, we would not pay for the scan” Goldfine said.

GEICO wouldn’t pay for a scan in a situation where a warning light came on and said “‘catastrophic failure ahead'” unless the vehicle was checked out with a scan, Watford asked.

“You would just say, ‘Come back and see us after you have this fatal accident, and then we’ll see about whether we need to repair this.’ That’s crazy,” Watford said.

Hansen attorney Robert Koch noted in his rebuttal May 13 that while it wasn’t included in the court record, Hansen did later pay for his own scan of the GMC 3500.

Ninth Circuit Court of Appeals Judge Paul Watford last week tried to pin down GEICO’s diagnostic scanning position during a hearing on whether to restore an Oregon lawsuit against the company. (Screenshot from Ninth Circuit video)

Ninth Circuit Court of Appeals Judge Paul Watford last week tried to pin down GEICO’s diagnostic scanning position during a hearing on whether to restore an Oregon lawsuit against the company. GEICO attorney Dan Goldfine is at bottom right. (Screenshot from Ninth Circuit video)