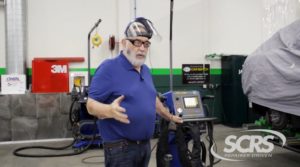 The Society of Collision Repair Specialists over the past week released the second and third in a series of free videos on squeeze-type resistance spot welding, a key joining technology for modern vehicles.

The second video examined weld preparation and the potential need for shunt pliers to create a circuit and make a weld possible on a nonconductive surface like e-coat.

The third video concentrated on the energy entering and being generated by the welders.

A squeeze-type resistance spot welder’s arms are neither positive nor negative, said SCRS Education Committee Co-Chairman Toby Chess, the host of both videos.

Instead, they deliver a “continuous loop of electricity,” he said.

Sticking the metal of a substrate between the arms builds up resistance, which releases itself in the form of about 2,000-degree heat, Chess said. The metal liquifies, only to be squeezed with a second or two of pressure from the gun and harden. “Now we have a solid weld,” Chess said.

Welding two substrates with electrodeposition primer (e-coat) foils this system, for the e-coat isn’t conductive, according to Chess.

A repairer must clean the area where the electrode tips will touch.

“A lot of technicians will grind everything off,” Chess said. “You don’t need to do that.”

Merely grind off what’s necessary to accomplish the weld and leave the rest of the e-coat, he said.

But an additional step is necessary to make the weld possible, Chess said, demonstrating this by attempting a weld — “nothing happened.”

Part of the issue arose from the e-coat remaining on the inside of the weld, Chess said. (However, some OEMs want you to leave it, he said.) But the real solution was to use shunt pliers after preparing a nearby area of the substrate, according to Chess.

The repairer must prepare a nearby area of the substrate to be gripped by a pair of shunt pliers during the weld.

The welder’s electricity will flow through the shunt pliers and metal gripped between them, forming a circuit to be shorted out at the spot weld point. The spot weld then works as intended.

You can’t just use regular pliers, Chess said. They might be steel — a poor conductor — and have a small area of contact with the metal, he said. The shunt pliers have wide, copper point of contacts and a cable between them for easy electricity flow, he said, calling them a must for a spot-welder.

Use the steel pliers merely to hold the substrates together after first covering their tips in electrical tape, according to Chess.

He said the shunt pliers are only needed for the first weld.

Chess also demonstrated using a weld on a surface covered self-etching weld-through primer (though he noted that some OEMs forbid the coating). Though technically a weld prepared like this could be accomplished without the shunt pliers, Chess used them anyway to be “on the safe side,” he said.

Of course, a welder needs enough power to make any of this work properly. The third video saw Chess warn that a spot welder hooked up to a long extension cord could lead to an amperage drop.

“Try to keep it as short as possible to a source,” he said.

It’s possible that the repairer might need to use a different wire, Chess said. He recommended a No. 4 or No. 6 gauge depending on the length of the run — perhaps even a No. 2 if the cord was particularly lengthy.

Repairers also had to be sure their shop had enough power in the first place, for most STRSW welders on the market are three-phase.

Chess also explained the difference between the two type of squeeze-type welder guns. A trans gun contains the transformer within the gun and is therefore bulkier, while a C-gun doesn’t.

The cables on a C-gun throw off “a lot of electromagnetic waves,” said Chess, noting how the act of welding leads to the cables “jumping” on their own and demonstrating it.

The electromagnetic energy means repairers must make sure no vehicle computers are located within 15 inches of a weld point, Chess said. (Check with your specific OEM — this could vary. For example, I-CAR’s rule of thumb in the absence of procedures is to remove any computer modules within a foot of where you’re welding or heating, while Toyota demands a clear 18-inch radius from the welding point.)

Chess also said the cable should be perpendicular to the vehicle, not parallel, to keep the electromagnetic waves from traveling alongside the vehicle’s surface. A shop will also want to isolate the vehicle by disconnecting the battery negative, according to Chess — which can trigger the need for procedures like a diagnostic scan.

As Chess noted at the end of the third film, you won’t learn how to weld from the short SCRS videos. But the posts ought to give a shop owner a few ideas of what to look for and correct while walking around a facility, he said.

In terms of training, Chess recommended I-CAR’s WCS04 theory course, which he said is now accompanied by a hands-on version.

If that’s not possible, Chess suggested asking manufacturers, for many have education programs.

Featured image: The Society of Collision Repair Specialists on May 30 released the third in a series of free videos on squeeze-type resistance spot welding, a key joining technology for modern vehicles. The new video, featuring Toby Chess of Kent Automotive, concentrated on the energy entering and being generated by the welders — both key considerations. (Screenshot from SCRS video)