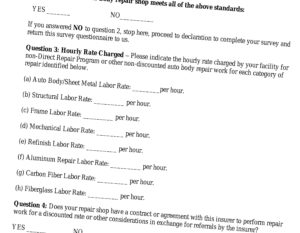 The California Department of Insurance in 2016 addressed the problem of insurers generating “artificially inaccurate, unreliable, and unreasonably low labor rates that are not representative of the market” by providing a template survey and methodology that could guarantee an insurer a “rebuttable presumption” of good faith. The format for practical purposes took effect in early 2017.

Insurers could still use any survey format they wanted, but they’d be at greater risk of having it declared an unfair claims settlement practice. Carriers also are free not to conduct a survey, though they’d presumably have to accept the shop’s labor rate given a lack of evidence it’s above the market. See public survey results provided by the CDI in the spring here.

Multiple insurers have indeed adopted the CDI’s format and receive assistance in the form of an agency tool for inputting results.

That standard format defines a market as every responding shop in a region extending a mile out from a six-shop cluster of survey respondents closest to or including the shop whose rates are being compared to the market (assuming the shop completed the survey). It also asks about door rates, including for materials like aluminum and carbon fiber. Direct repair program rates are not permitted.

Lists of all the Bureau of Automotive Repair-licensed shops are also available to help insurers start the process. Shops must be licensed and confirm they meet certain equipment standards for their results to count.

If the survey is done right and shops respond, the survey generally works well, Bezeck said of the CDI template. But if shops don’t respond, “it doesn’t work.”

Bezeck gave the example of Farmers, whose study he commended.

“It was fairly done,” Bezeck said. The carrier “did a good job.” Overall, the shops were satisfied, he said.

Farmers was noteworthy in that it “worked really, really hard” to get the results it did, according to Bezeck. It didn’t just send out surveys and call it a day; the insurer followed up several times with shops to solicit responses too, he said.

Yet even Farmers only collected responses from 3,418 out of 6,269 BAR-licensed shops in 2017, noting that some of the 2,851 facilities which didn’t respond included “dealership and mechanical only repair shops.”

GEICO appears to have received less than 2,000 responses out of “the entire list” of BAR-licensed facilities in 2017 and 2018 to calculate its market rates. Other insurers report sending out standard surveys to more than 6,000 facilities licensed by BAR at the time they did the survey but don’t report how many completed the study.

When an insurer sends out 6,000 surveys and receives far less back, “that’s the main problem,” Bezeck argued.

A lack of local shop response triggers the need for an insurer to expand the market to find six core shops and then another mile’s worth of peripheral facilities.

An idea that has been discussed as a possible alternative for collision repairers, insurers and consumers would be to have the Bureau of Automotive Repair collect labor rates.

All insurers would also be working off the same information and save the time and expense of the survey. Body shops wouldn’t have to fill out multiple surveys.

Right now, it’s possible for a shop to encounter two prevailing rates for its market from two different carriers who both followed the same survey format. It all depends on which nearby repairers bothered to respond and thereby define the market and rate. For better or worse, neither the shop nor the insurer can use a prevailing rate determined by another carrier.

Bezeck said body shops brought up the idea years ago, asking the BAR to collect everyone’s labor rate. He said the mechanical repair sector liked the idea and sought to be included too.

The BAR felt it couldn’t do it under the status quo — legislation would be required — according to Bezeck.

From a collision and mechanical repair consumer perspective, the idea also has some merit. A consumer could shop around based on price and have tremendous transparency into at least the labor rate of the repairers being considered. Obviously, shops could still negotiate a different rate, just as they can do with rates today and under the CDI’s survey format.

Tony Cignarale, CDI deputy commissioner for consumer services and market conduct, said the idea was discussed during the rulemaking process on the labor rate survey process, but “it didn’t go anywhere.”

He said the CDI invited the BAR to participate, but it didn’t want to be responsible for collecting labor rate survey data that was to be used for insurance purposes.

As an insurance regulator, CDI had no power to compel shops to provide such details to BAR, and it didn’t want to insert itself between BAR and the shops, according to Cignarale.

Contacted for comment earlier this month, the BAR wrote: “It’s outside the scope of the Bureau of Automotive Repairs’ mandate to collect and prepare autobody repair shop labor rate information for use by the insurance industry. We support the efforts of the California Department of Insurance by providing them with a list of registered shops that identify collision repair as their primary or secondary business.”

New California Department of Insurance labor rate survey regulations suggest a market be the nearest six shops plus everyone else in a circle extending out a mile from the furthest shop. (Provided by CDI)