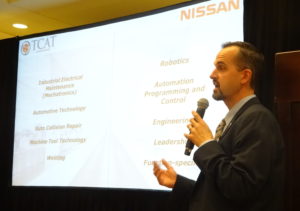 Collision repairers seeking more technicians might want to push state leaders to borrow some of the strategies a panel of public and private Tennessee workforce development personnel described this spring.

Shortly after her presentation, Dan Caldwell, senior manager of learning pathways for Nissan, and Jon Mandrell, president of the Tennessee College of Applied Technologies-Murfreesboro, revealed how a Nissan-TCAT partnership generated skilled technical labor for Nissan’s plant and dealerships.

The talks gave shops a playbook of big-picture policies to champion at the statehouse and initiatives that could perhaps be pursued with educators and school systems. The latter discussion reinforced what panelists suggested as takeaways for small businesses like many body shops; see that coverage here.

SCRS released video of the event Thursday; watch it below or on the SCRS YouTube channel.

Thompson said challenges in Tennessee “are the same challenges” repairers were facing.

The state has three OEMs (General Motors and Volkswagen are the others) and more than 900 automotive industry suppliers, according to Thompson’s presentation. Eighty-eight of Tennessee’s 95 counties have an automotive company. The sector has boomed particularly in the past 5-10 years as companies ditch Michigan and Wisconsin, she said.

Thompson said this means the state needed a “darn good” education program, given the constant change in automotive technology.

She said she would get calls from companies, and “the skills kept coming up.” Either the company couldn’t find skilled labor, or those with the skills faced issues like drugs or childcare keeping them from taking the job.

Tennessee realized the workforce was changing, Thompson said. By 2020, 65 percent of jobs would need a post-secondary credential — but this could mean vo-tech as well as a Ph.D or bachelor’s degree, she stressed.

Another consideration involved the typical college student. Historically, they might have been an 18-year-old frittering away four years, Thompson suggested. Now, 38 percent are older than 25, according to her presentation.

“That’s a big access question,” she said of the older students: How would the school adjust itself to accommodate them?

Twenty-six percent are raising children, according to the presentation. “That creates a whole new world of problems,” she said.

Fifty-eight percent worked while at school, according to the presentation. Thompson said employees learn to work “at work” — by being in an operation and gaining that experience and exposure, soft skills like showing up on time.

One of the best things to do when soft skills were lacking in a workforce was to give people an opportunity for an apprenticeship or work-based program to learn those skills, she said.

Thompson said Republican former Gov. Bill Haslam created the “Drive to 55” goal, which involved 55 percent of Tennesseans educated with some kind of post-high-school credential by 2025.

To achieve this goal, “he made college free,” Thompson said. Vo-tech and community college is free to any high-school graduate who accomplished certain tasks.

“We saw tremendous growth in the enrollment numbers,” Thompson said. Between its launch in 2014 and 2016, enrollement rose 13 percent. “That’s huge,” she said.

The state also launched Tennessee Reconnect, which allowed any adult lacking a credential to obtain one or an associate’s degree for free.

It also changed how it discussed higher education, which Thompson said had a “very large impact.” A technical certificate was a degree, and “a technical college is a college,” she said. 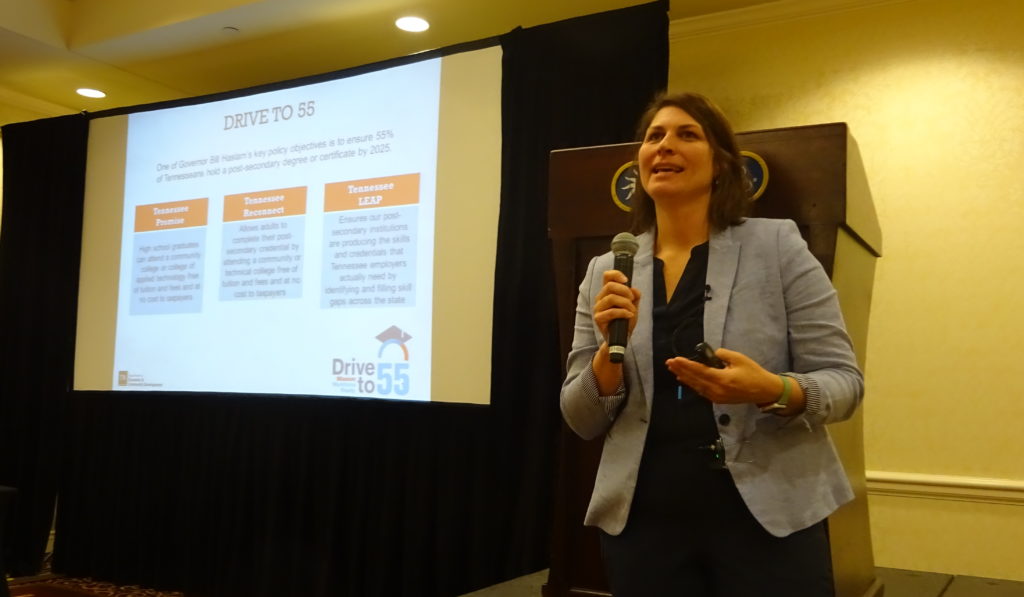 Caldwell and Mandrell demonstrated that a private sector business could take the initiative to partner with a school and grow its own workforce.

Caldwell said Nissan, which has an extensive Tennessee presence, planned to add new vehicle lines and a new production shift as the nation’s economy improved after the recession. But it realized it didn’t have enough skilled maintenance technicians to make that possible, nor were there enough mid-career ones to poach. (“That’s never a good solution,” he said, and noted that Nissan didn’t want to take them from its own suppliers.)

Nissan’s idea of a maintenance technician isn’t a janitor or building maintenance staffer. Caldwell said the job is “highly skilled” and can involve programming robots and predictive analytics.

Nissan and other employers like Bridgestone organically got together with the K-12 and higher education system to create a pathway into the skilled trades, and the idea of Nissan and TCAT partnering under a single roof arose. The OEM and the college would share equipment and teachers.

Mandrell said TCAT has two campuses. One is automotive and manufacturing focused, while the other concentrates on health and human services, he said.

All the programs are built around needs industries express, according to Mandrel. TCAT just added 16 programs around building trades, labor needed to build homes for the county’s booming growth, he said.

Education doesn’t always move fast, but TCAT is known for being “‘speedboats,'” Mandrell said, quoting a former governor. It hears industry demand and it launches a program, he said.

Mandrell said some might wonder why job openings sit unfilled. “They’re not looking for just anyone,” he said.

Employers want workers with a solid curriculum foundation but also life skills, and TCAT divides its program between the two, Mandrell said. (He said he just dealt with a student who kept sleeping in class.)

TCAT treats its students like a workforce, Mandrell said. “It’s a very different model.” Students arrive at 7:45 a.m. and stay until 2:30 p.m., bringing their own lunches and held to attendance metrics.

In the past, industry and educators would talk and collaborate but then return to their individual corners, Mandrell said. Nissan and TCAT had built a “very unique paradigm” under one roof.

The OEM and college split the cost of a $1.2 million paint booth setup reflecting Nissan’s own plan, according to Caldwell, and Mandrell called it “pretty amazing” to have two booths at a technical college.

Mandrell said the TCAT collision repair program is “very, very popular.” It has 20 students and a waitlist, with a constraint being space. As vehicles are brought in for projects, the space fills up quickly, he said.

Caldwell said Nissan and TCAT offered a work-study industrial electrical maintenance program for students at least 12 months through the degree. Students could apply to work for Nissan, and it was a great way for employee and employer to learn about each other, he said. “I’m proud to say” all of them to date have been offered a full-time job, he said. 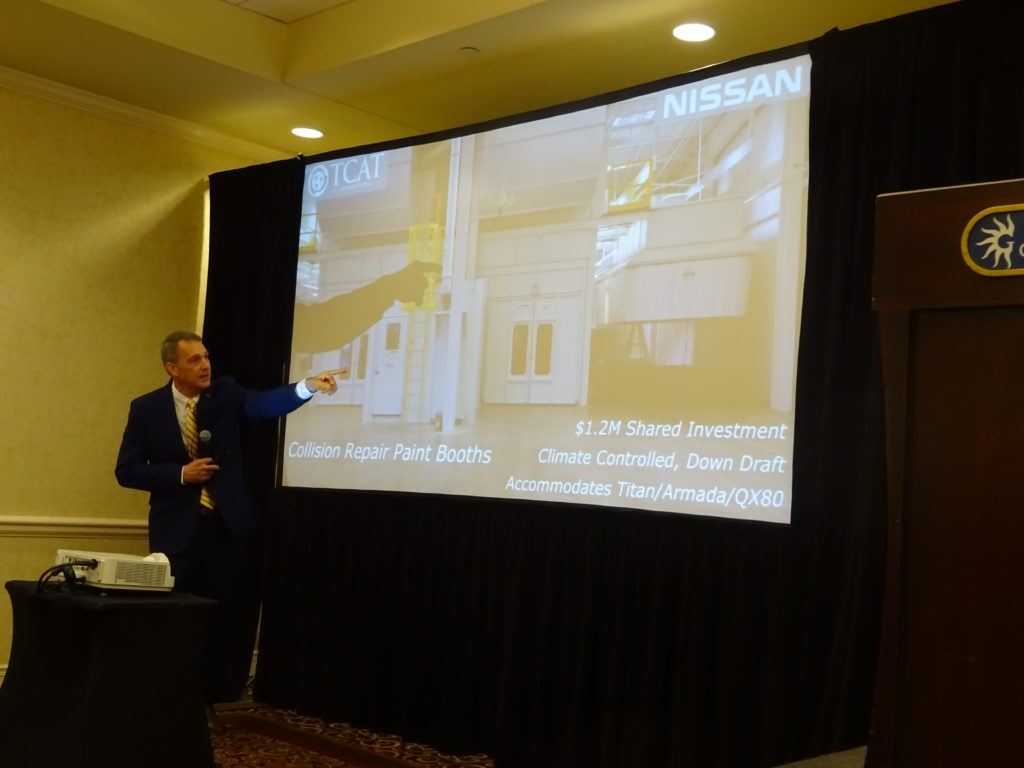 However, Caldwell also Nissan-TCAT graduates can go anywhere they want. While the OEM hires graduates, they also might find homes at suppliers or even competitors, he said.

Nissan also is responding to a need from dealerships, for his colleagues in Nissan’s parts and service side have said by the time students graduate a service and repair program, it’s too late to get them.

As a lack of technicians is one barrier to Nissan gaining market share, the OEM also identified 10 TCAT students, reimbursed the cost of tools and placed them in dealership internships, according to Caldwell. Four of them have been placed with dealerships “immediately” after graduating.

Nissan also has helped the tech shortage on its certified shops’ side by collaborating to offer I-CAR curriuculm and donating damaged vehciles and body panels (such as from warranty work).

Equipment cost was a “huge barrier” to vocational education, Caldwell said. So Nissan reached out to vendors with which it already did business and recevied $2 million worht of items like robots and hydraulics.

Finally, Nissan is working to develop a pipeline of new students through the Rutherford County Chamber of Commerce’s Rutherford Works umbrella, according to Caldwell, Nissan’s liaison to the chamber. (The company’s Smyrna plant is in Rutherford County.)

According to Caldwell’s presentation, the program sponsors career exploration opportunities on school grounds and activities at employers. These are capped off with work-based learning, which means actual on-the-job training, he said.

Nissan offers Rutherford Works high school internship, which Caldwell called a “great time of discovery.” It crystallizes for students if a job at Nissan is or tsn’t a good fit for them, he said.

Nissan considers both outcomes a success, he said.

The company also participated in the chamber’s “externship,” hosting teachers and administrators from a middle school for two weeks.

Nissan also gave every eighth-grader from Smyrna Middle School a tour of the plant and hosted 955 seventh-graders for a STEM summit.

Nissan also sponsors the state-level SkillsUSA — Caldwell called that tournament a “great place to recruit talent” — and hosts DECA competitions to get students looking at the facility.