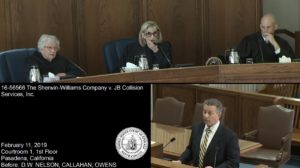 The Ninth Circuit Court of Appeals has ruled that a California federal judge improperly cut the damages awarded a body shop owner who alleged Sherwin-Williams strung him along with unfulfilled promises to fix flawed waterborne paint.

The same jury also had found that JB Collision and JJT owner John Tyczki breached his contracts with Sherwin-Williams and owed the paint company $374.448.70.

“The Court finds it difficult, but not impossible, to thread the needle through the jury’s seemingly inconsistent general verdict,” Burns wrote in his May 10, 2016, decision cutting the amount awarded Tyczki.

Burns had reduced what would have been a net win for Tyczki of almost $2.88 million to nearly $260,000. He did feel there was enough evidence to support past damages for 100 vehicle re-dos tied to Sherwin-Williams’ paint, according to the Ninth Circuit.

“Taken in the light most favorable to the Body Shop Defendants, the evidence establishes that flaws in Sherwin-Williams’ product caused them $106,357.07 in damages for unpaid warranty claims, required them to redo 100 vehicles, and that there’s another 65 vehicles waiting in the queue to be repaired,” Burns wrote in 2016. “Using the Body Shop Defendants’ higher estimate of $3,200 to repair a vehicle, the evidence supports a maximum verdict of $634,357.07 on their fraud claims.”

But a trio of appeals court judges on April 25 ruled unanimously that the trial record reflected the jury heard evidence John Tyczki had suffered “reputational” and “emotional” harm in the dispute with Sherwin-Williams.

“Sherwin-Williams argues that these costs should be excluded from the damages because Tyczki should be judicially estopped from recovering them, and the economic loss rule bars recovery,” the Ninth Circuit wrote. “We agree with the district court. There was sufficient evidence presented at trial to establish that Tyczki suffered damages as a result of re-dos, and that because Sherwin-Williams was on notice of these arguments, Sherwin- Williams was not prejudiced.”

The Ninth Circuit justices split 2-1 on whether Tyczki had demonstrated prospective damages.

Senior Circuit Judge Dorothy Nelson and Circuit Judge Consuela Callahan ruled Tyczki had been so harmed, while Circuit Judge John Owens felt U.S. Southern District Chief Judge Larry Burns was right to reduce that part of the verdict against Sherwin-Williams due to a lack of evidence on redos related to its paint.

“Even if Tyczki proved that some number of vehicles have yet to be repainted, the district court correctly determined that Tyczki failed to ‘introduce any evidence that would allow the jury to determine what portion of the vehicles that they had painted in the past would need to be repainted,'” Owens wrote in his partial dissent. “Thus, I agree with the district court that Tyczki failed to support prospective damages.”

The case isn’t over. Sherwin-Williams in 2016 also filed a Rule 59 motion seeking either a new trial or a reduction of damages, which Burns had declared moot in light of his Rule 50 decision to pare down the damages.

The appeals judges kicked the case back to Burns’ court to give Sherwin-Williams a chance at having its Rule 59 motion heard.

The opinion also noted that Sherwin-Williams had argued that more than $1.25 million would be an improper recovery. While Burns didn’t address this point in his ruling cutting the $2.88 million to $634,357.07, it “may become ripe on remand,” the Ninth Circuit wrote.

The jury had determined Sherwin-Williams committed fraud/concealment and intentional misrepresentation — but not “clear and convincing evidence” of “malice, oppression, or fraud” — awarding Tyczki $750,000 and $1.25 million respectively, but no punitive damages. It also felt Sherwin-Williams committed negligent misrepresentation, awarding another $1.25 million.

The paint manufacturer had argued in January 2016 that all three fraud verdicts should at most be capped at $1.25 million. “It is an undeniable truth that litigants are not entitled to a double recovery,” Sherwin-Williams wrote in January 2016.

Briefs by Sherwin-Williams and Tyczki are due this month in the U.S. Southern District Court on the Rule 59 request and the duplicate recovery issue:

A hearing has been scheduled for Aug. 16.

The case is an interesting one to review for both the collision repair and paint manufacturing industries.

Tyczki, who anticipated stricter environmental regulations from San Diego, wanted to get ahead of the curve on waterborne paint at JB Collision’s shops and train and equip his staff to apply it properly. In exchange for advances of $275,000 and $40,000 respectively to JB Collision in 2008 and JJT in 2011 (in a deal to outfit the new, JJT-controlled John’s Collision Center), he agreed to buy exclusively from Sherwin-Williams $1.3 million and $250,000 worth of equipment and paint, respectively.

Sherwin-Williams would still give Tyczki discounts on those product, but they’d be less than that given to a typical customer so as to pay off his advances.

Tyczki’s lawsuit states he did the deal in 2008 because a Sherwin-Williams representative told him something along the lines of “everything you buy from us is included to count toward the $1.3 million” (not solely paint), something Sherwin-Williams later disputed.

That representative and another from Sherwin-Williams also told him its waterborne paint would work as well as solvent paint, the suit states.

“Specifically, Sherwin-Williams … stated to John Tyczki that its water-based paint products provided a perfect color match and did not have any defects that would cause problematic physical characteristics such as ‘dye back’ (also sometimes referred to as ‘loss of gloss’), ‘sanding scratches,’ ‘color fading,’ color match problems, ‘solvent popping,’ paint ‘shrinkage,’ and ‘orange peel,’ Tyczki’s attorneys wrote in the lawsuit.

But the paint actually did all of those things, according to Tyczki. Nor was it possible to paint a car “prime to shine in 50 minutes,” as the rep pledged, according to the lawsuit. 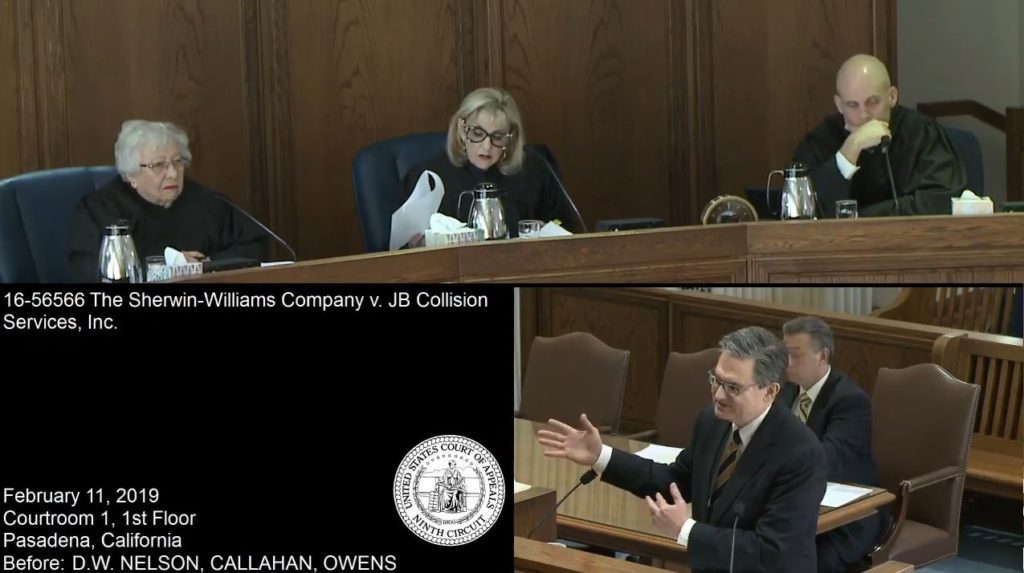 After six months of JB Collision using solvent paints, Sherwin-Williams said they’d fixed the issue, the suit states. They hadn’t, and Tyzcki then begun noticing all the other paint issues described above, his attorneys wrote. Every time, Sherwin-Williams reps allegedly pledged to fix the issue but didn’t.

By 2010, San Diego mandated waterborne paint and JB Collision was stuck in the position of either breaking the law with solvent paints or breaking the contract and switching to a competitor, according to the lawsuit. Sherwin-Williams gave free paint products to make up for the repainting, though Tyczki had to eat the labor bill, his attorneys wrote. Tyczki estimated that labor came out to about $2,000 per vehicle.

By 2012, Sherwin-Williams’ paints were still having the problems, and two different representatives pledged to fix the issues, Tyczki alleged. By the first half of 2013, JB Collision would reach the $1.3 million threshold, his lawsuit claims, but one of the other representatives promised to have it ironed out by then.

The Ninth Circuit noted that the jury wasn’t directed to issue a specific separate decision on “past, prospective, reputational, and emotional damages.” Instead, the court told jurors “to find an amount that would “reasonably compensate” Tyczki for “all harm that Sherwin-Williams was a substantial factor in causing.” (Emphasis Ninth Circuit’s.)

Burns had agreed Tyczki had presented evidence of reputational harm but felt Tyczki “‘offered no evidence that would allow the jury to calculate the amount of resulting damages,’” according to the Ninth Circuit.

The Ninth Circuit unanimously said he didn’t have to, quoting from the 2012 California Court of Appeals decision in Rony v. Costa.

Burns didn’t mention emotional damages in his 2016 order cutting the damages, but the Ninth Circuit said his “decision to reduce damages is proper only if there was no evidence of emotional harm.” It felt a jury could have concluded the shop owner suffered emotional harm:

Tyczki testified to being “embarrassed” and “upset” over being “fooled and lied to throughout [the] whole contract” by Sherwin-Williams and testified that Sherwin-Williams is “breaking me.” Tyczki’s manager similarly testified to being “really nervous and worried about what the future holds” and having “lost quite a bit of sleep worrying about how many cars may come back down the road.” A reasonable jury could have included a measure of emotional distress in its “reasonable calculation” of damages for “all harm.”

As far as the more controversial issue of prospective damages, the majority Ninth Circuit opinion states:

The court found that Tyczki failed to prove prospective damages by a “reasonable certainty” and that Tyczki presented “no evidence” to support future harm. We disagree. The testimony of Tyczki, his manager, his employees, and his customers evince that Tyczki painted approximately 10,000 cars with Sherwin-Williams’s AWX System, almost all of them experienced (dye-back), any re-dos were done at no charge to the customer, and Tyczki completed about 100 re-dos.

Based on the trial testimony and a common sense reading of the instructions, a reasonable juror could have found prospective damages for costs to repair customer vehicles that have yet to be fixed.