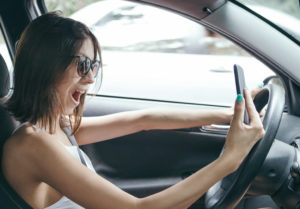 The insurer on Tuesday revealed new research which found drivers of vehicles with adaptive cruise control and lane-keeping used their smartphones “at significantly higher rates” than motorists lacking the ADAS tech.

State Farm found 42 percent of drivers with lane-keeping “frequently” or “sometimes” video-chatting while driving. Only 20 percent of drivers reported doing so that often — a stat which is still sort of frightening — in vehicles without the feature.

Double-digit percentage-point differences were seen in motorists “frequently” or “sometimes” reporting other distracted driving behaviors too. 62 percent of drivers with either technology were reading or sending text messages, compared to 49 percent without adaptive cruise control and 51 percent without lane keeping. 52-56 percent were manually entering phone numbers, depending on the technology, compared to 38 percent of drivers without one or the other ADAS system. 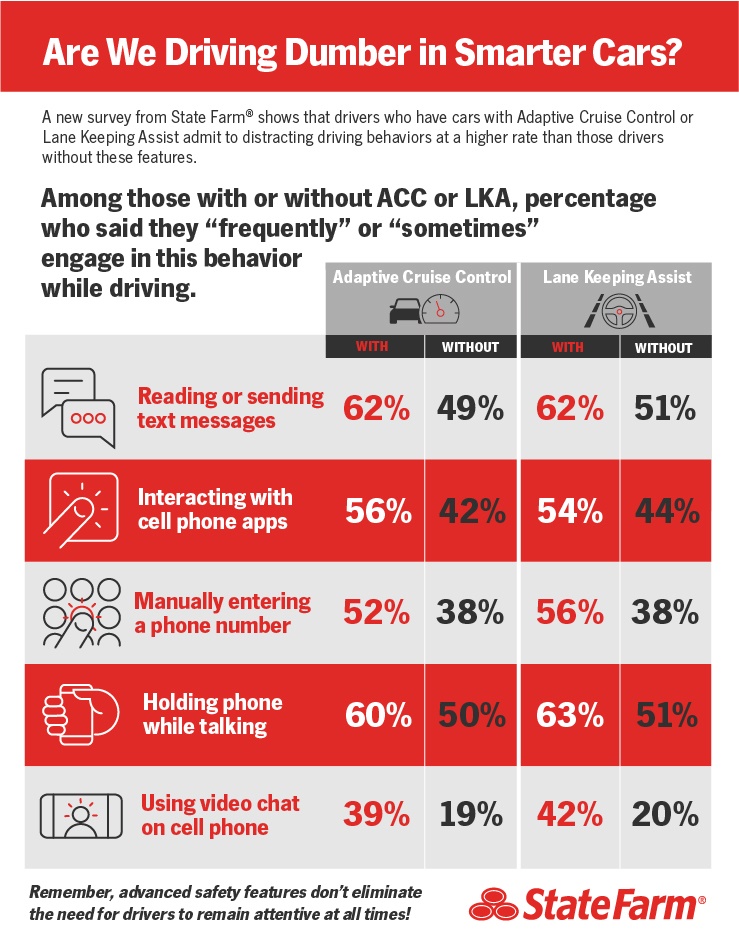 The data suggest the existence of the additional safety net inspires drivers to take more risks. Granted, the ADAS might still prevent oblivious or slow-to-react drivers from getting into wrecks — that the point. But it’s not infallible either, and all ADAS — even Cadillac’s advanced hands-off Super Cruise system — comes with the OEM caveat that the driver pay attention at all times.

“Innovations such as Adaptive Cruise Control and Lane Keeping Assist are designed to make our roadways safer,” State Farm enterprise research Assistant Vice President Laurel Straub said in a statement. “These systems are meant to assist drivers, not replace them.”

Consumer Reports polling and the IIHS suggest lane keeping and adaptive cruise control can protect people from crashes, which is great for society but not so good for auto body shop volume. But a bunch of drivers thinking they can text or video chat while such systems are engaged could push crash frequencies back up and soften the blow to shops.

Of course, such misbehavior might already have existed in the real-world population and already be reflected in those results. This would mean human nature will actually be sparing shops from what would have been higher frequency declines.

State Farm surveyed 1,023 consumers ages 18 or older about their driving. The insurer said 64 percent of drivers lacked both ADAS technologies, while 29 percent of them owned one or both of the systems. That’s also an interesting piece of information for shops to consider. The possibility that nearly a third of your potential customers have ADAS could signal ramifications for both shop volume and shop repair complexity.

State Farm also found half of all respondents were willing to take their eyes off the road for less than five seconds to do something else while traveling at 65 mph.

“At that speed, you can drive the length of a football field in 3.2 seconds,” the insurer wrote. “Anything can happen in 100 yards.”

“Are We Driving Dumber In Smarter Cars?”

State Farm found 42 percent of drivers with lane-keeping “frequently” or “sometimes” video-chatting while driving. Only 20 percent of drivers reported doing so that often in vehicles without the feature. The numbers were similar for adaptive cruise control, according to State Farm. (BenAkiba/iStock)

State Farm polling of more than 1,000 drivers, about 29 percent of which had lane keeping and/or adaptive cruise control, found drivers with either ADAS more likely to engage in distracted driving behaviors than motorists without the technology. (Provided by State Farm)