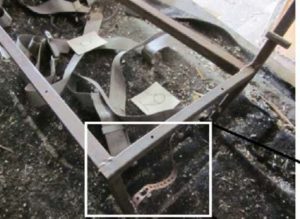 The NTSB report is worth reading by both limousine-building and traditional body shops. It seems to highlight what could happen when repairs or modifications to a vehicle in the automotive aftermarket aren’t sufficient to handle the physics of a crash.

The NTSB on Wednesday recommended seatbelts containing both lap and shoulder straps be installed standard at every passenger seat in a limo. It also wants standards for builders installing seats in vehicles being converted to limos.

“The Schoharie crash shows that a comprehensive solution is required to address the multiple occupant protection problems associated with seating systems on limousines that have been modified from other types of vehicles. Federal standards could provide such a solution,” the NTSB wrote. “Therefore, the NTSB recommends that NHTSA require that seating systems installed in new vehicles modified to be used as limousines meet minimum performance standards to ensure their integrity during a crash.”

The agency also recommended that the New York Department of Transportation’s inspections check for functional and accessible seat belts, and it would like to see the state enact a mandatory limo seat belt law.

“This was a horrific, high-speed crash that tragically killed 20 people, including the driver,” NHTSA said in a statement when asked about the recommendations. “NHTSA welcomes NTSB’s initial analysis to mark the one-year anniversary of this tragedy, and the agency looks forward to reviewing the full investigation, data, and analysis when they are complete.”

The limo in October 2018 blew through a stop sign in a 50-55 mph area. It struck an unoccupied 2015 Toyota Highlander SUV near a restaurant, sending it into two pedestrians and killing them before continuing into a ravine and striking an embankment. All 18 limousine occupants, including the driver, died.

A phone number for the limo operator produced a busy signal Wednesday. 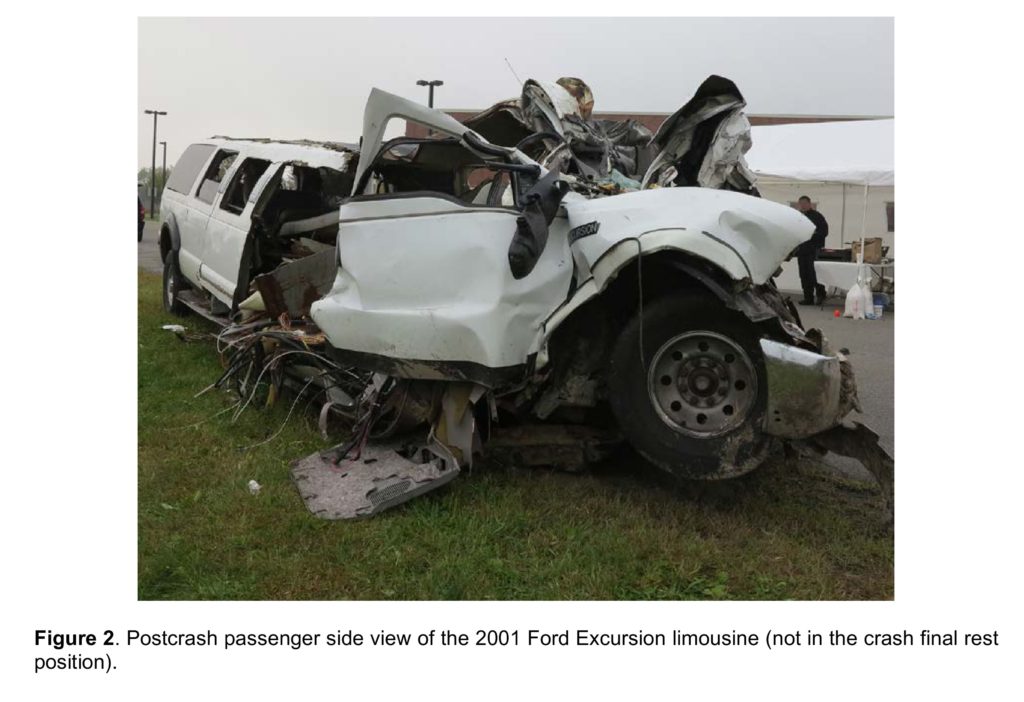 “Despite the severe damage and intrusion, rear portions of the passenger compartment remained relatively intact, maintaining space for the occupants to survive,” the NTSB wrote in a report adopted Sept. 13.

The driver wore his seat belt and the airbag deployed, but the crash produced “a complete loss of survival space,” and the NTSB thinks there was no way he could have survived anyway. None of the 17 limo passengers were wearing seat belts.

However, even if some passengers were wearing seat belts, they might have sustained injuries anyway, according to the NTSB.

“Loss of seating integrity can result in additional injuries for both unbelted and belted occupants,” the NTSB wrote. “Failed seats and seat cushions can introduce sharp surfaces into the passenger compartment and become projectiles that strike occupants within the space. Moreover, when a seat containing a belted occupant fails, the force against the seat belt includes the weight of the seat as well as that of the person, and the person will be displaced from the normal position in the seat that the seat belt is designed to restrain. Both outcomes increase the risk of injury to the belted person.”

This demonstrates why it is critical that repairers follow OEM repair procedures related to seats and seatbelts, as well as perform all OEM required inspections on restraint systems. And they shouldn’t dismiss that responsibility by saying a crash at a certain speed or containing certain conditions would have just killed everyone anyway. According to the NTSB, that’s not necessarily true.

“The NTSB has investigated other limousine crashes, such as those in Elgin, Illinois, and Cranbury, New Jersey, that involved lower crash forces but still resulted in serious injuries and fatalities,” the NTSB wrote. “In all these crashes, properly designed and installed seats and seat belt systems (and seat belt use) had the potential to mitigate injuries and increase survivability.”

Later in the report, it observed that despite the demolished vehicle front end, much of the passenger compartment “was not compromised by intrusion and retained survival space.”

Here’s what repairers need to remember when questioning the need for OEM repair procedures. According to the NTSB, a repair or modification (or OEM car, for that matter) must be good enough to deliver three factors necessary for occupants to survive, a trio it says is sometimes called a “‘chain of survivability.'”

“First, the occupant survival space must remain intact and not be compromised by intrusion; second, the crash impact loading (crash forces) experienced by the occupants must be within survivable limits; and third, the postcrash environment must remain survivable for evacuation. Because there were no issues related to postcrash survival, such as fire, this report focuses on occupant survival space and crash impact loading.” 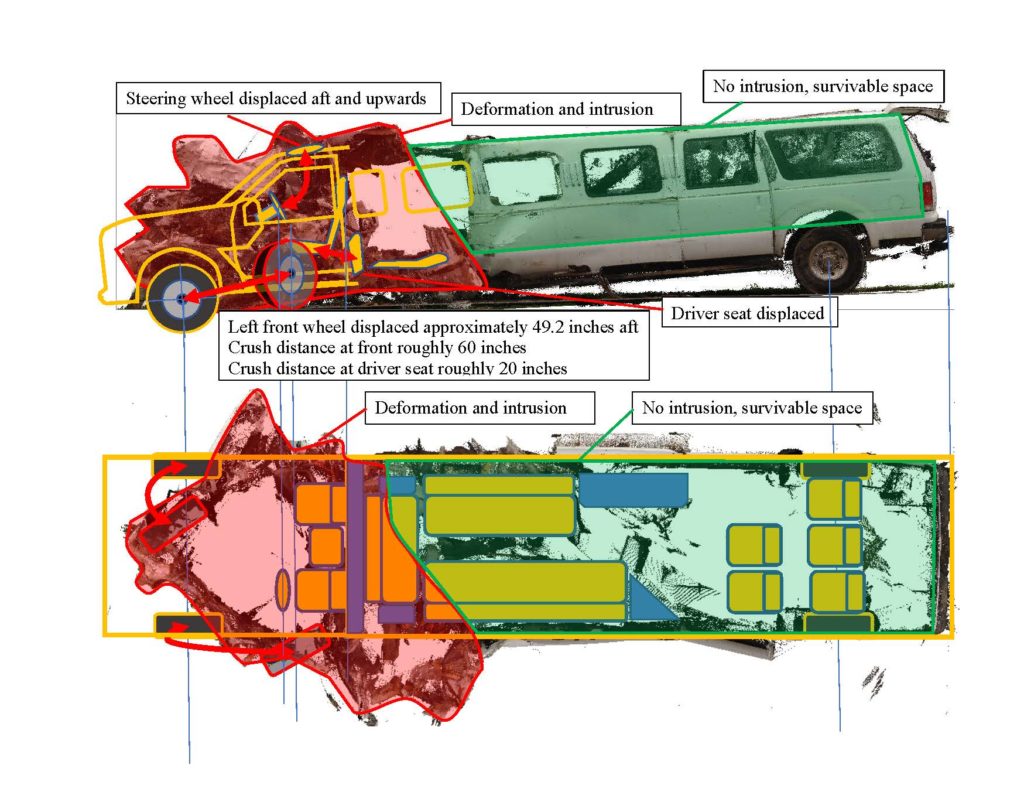 In the case of the Schoharie crash, NHTSA said the limo builders delivered a vehicle that wouldn’t deliver an OEM seat and seatbelt’s level of crash protection.

It described the modifications by the builder who bought the OEM Excursion in 2001 as follows:

The alteration process entailed cutting the factory frame of the Excursion and welding an additional 144 inches of frame rail to extend the factory frame rails. The interior of the vehicle was reconfigured with perimeter-style bench seating and entertainment accommodations, as detailed below.

The one contact phone number we found for the 2001 limo builder mentioned in the NTSB report simply rang. The company doesn’t appear to operate as a business any more.

According to the NTSB, the non-OEM bench seats on the limo in 2018 were built out of “welded square tubular steel” and “attached to the floor using individual screws that were mounted through the metal seat anchor straps.”

Those straps might have been lacking, according to the NTSB.

“The anchor straps appeared to be made from commonly available, thin steel, pipe-hanging strap,” the agency wrote. “The installation of the bench seat frame and anchorage was not consistent with the methods used for the dynamic load environment of a motor vehicle.”

The non-OEM seat design failed and came detached from the floor — while the OEM seats didn’t. Damage sustained to the OEM seats only resulted from being hit from a battery stored in the vehicle and from the passengers moving around during the crash. 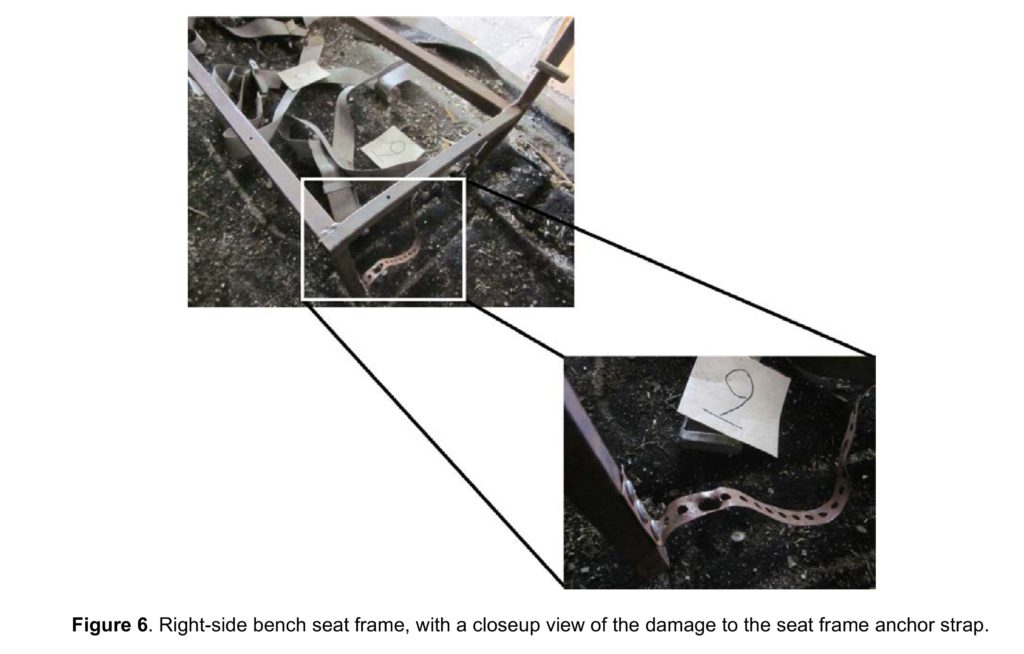 The non-OEM design was inadequate to the point that the seats would have gone moving even if a belted in passenger’s weight was affixed to them, according to the NTSB.

“During the crash sequence, the side- and rear-facing bench seats failed in the direction of the crash forces,” the NTSB wrote. “The seat cushions separated from the seat frames, and the seat frames separated from their anchorage points, collapsed, and were displaced forward toward the passengers and the privacy divider. The mounting holes in the seat frame anchor straps were elongated, which released the screws that anchored the seat straps to the floor. (See figure 6.) Therefore, the strength of the non-OEM side- and rear-facing bench seats and their anchorages was inadequate to keep them secured to the floor during the collision, even without the additional loading that would have occurred with belted passengers.”

The non-OEM lap belts also didn’t line up adequately with the seat positions to deliver desirable “occupant loading geometry,” according to the NTSB, which in a footnote directed readers to FMVSS 208, which describes requirements for seat belts.

“… In some locations, the spacing between the anchorage points was extremely narrow, which would result in improper passenger positioning for seat belt effectiveness as well as interfere with the seating of adjacent occupants,” the NTSB wrote. “For one lap belt, the space between the anchorage points was only 5.75 inches. When worn by occupants in a crash, lap belts with insufficient spacing between anchorage points can cause injuries to the user’s pelvis and abdomen, a safety issue that the NTSB identified in its report of the Concan, Texas, crash investigation.”

Since nobody was wearing their seat belt, the NTSB said couldn’t assess how good the lap belt anchorages were in the limo. “However, the postcrash damage and the seat failures raise general concerns about the adequacy of the seat belt anchorage attachments in limousines,” the NTSB wrote.

It noted that it’s investigation of the 2016 Elgin limo rollover crash found non-OEM lap belts attached to a “bench seat frame made of plywood” by wood screws.

“In a crash, a passenger belted to a plywood bench seat would experience only minimal restraint from the seat belt assembly and would suffer injuries similar to those of an unbelted occupant,” the NTSB wrote.

According to the National Transportation Safety Board, the non-OEM bench seats installed on a limo involved in a fatal 2018 Schoharie, N.Y., crash were built out of “welded square tubular steel” and “attached to the floor using individual screws that were mounted through the metal seat anchor straps.” (Provided by NTSB)

This 2001 Ford Excursion XLT was modified into a limousine that ultimately in 2018 was involved in a crash that killed two pedestrians and all 18 occupants. (Provided by NTSB)

The National Transportation Safety Bureau observed in a Sept. 13, 2019, report on the fatal Schoharie, N.Y., limo crash that despite the demolished vehicle front end, much of the passenger compartment “was not compromised by intrusion and retained survival space.” (Provided by NTSB)