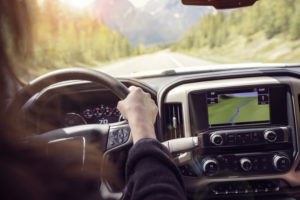 A collision repair expert last month said an estimator could need to account for an hour or two worth of test drives and pre-delivery vehicle checks, and even more should a car’s conditions and OEM procedures dictate it.

P&L Consultants co-owner Larry Montanez III last month provided estimators on a Collision Hub open “Virtual 20 Group” with some potential labor times related to such operations. He said they were “suggested times” he’d used in the past.

He offered two formats an estimator could use. In one, each operation would be itemized separately with its own labor time. In another, longer and more general “Test Drive Vehicle” labor times appear on the estimate along with a note explaining the operations the charge included but was “not limited to.”

Montanez’s webinar listed the times as mechanical, but he said some could be alternately classified as diagnostic. At one point, he agreed that a particular operation could be categorized as electronic as well if one’s estimating system allowed that designation. (Montanez said he uses multiple custom labor categories, including one for unskilled work such as covering the car.)

However, the line items discussed in the webinar “definitely” were not body or frame operations, he said.

Montanez said this was verifying that the car was able to to be test driven in the first place and argued it didn’t deserve a charge. He said he felt this was “part of overhead,” likening it to a departmental quality control checklist.

Montanez said it’s what a dealer would charge to test the vehicle and check tire pressure prior to performing a wheel alignment if necessary. He said it could be done in-house too.

Why do you have to test-drive if the dealership performing the alignment already did? Montanez argued their test drive — “probably with the radio on” — likely wouldn’t have checked for additional features like wind noise. The dealer was merely studying the alignment they’d been hired to provide, he said.

So repairer would have to conduct a separate test drive, according to Montanez. (Plus, the repairer would still as the lead contractor have to check the dealer’s work anyway, he also pointed out.)

The post-alignment test drive might require different speeds, such as verifying that reaching a highway speed doesn’t suddenly produce odd sounds or shakes.

Montanez said checking a hybrid system can require variable speeds and road conditions, including driving the vehicle in a hilly area to ensure the regenerative braking works.

He said this typically required a second technician to be performed correctly, and in such cases he would multiple the relevant time by two. One technician is needed to drive the car, while the other takes the responsibility of monitoring a screen displaying relevant information, he said. (Two techs might be needed for other operations which would require a second pair of eyes. Montanez at one point mentioned the possibility of needing a second tech to verify blind-spot monitoring performance.) 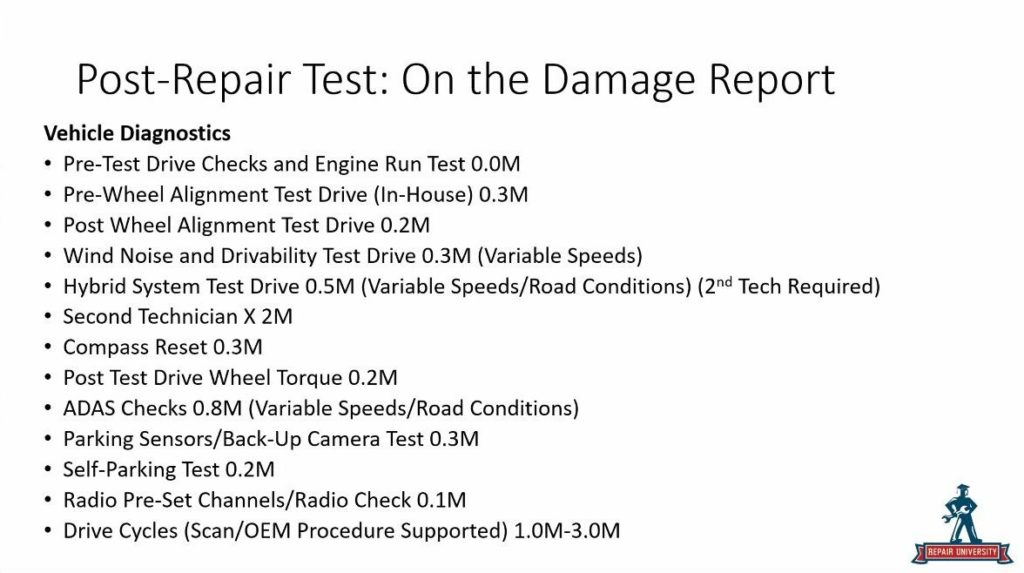 Indicators the vehicle’s compass needs recalibration include displaying the incorrect direction, failing to change during turns and going on and off, according to Montanez. Resetting it can entail driving in a circle at around 3-6 mph multiple times in an area without large metal objects or power lines, he said.

“It’s not that bad” to perform, he said.

Montanez called that a separate operation not included in the torquing operation.

Repairers need to verify all of the customer’s advanced driver assistance systems are working correctly in real-world road conditions. A Minnesota MSO who handles a significant amount of calibration in house in July said such test drives should be “mandatory” and offered the example of a scanned and calibrated vehicle whose adaptive cruise control still had problems on the road. (The culprit was a tweaked radar mounting bracket.)

Montanez felt these could be between 30-40 minutes, and “once in a blue moon” might need an hour. Variable speeds and road conditions might be necessary, according to a slide.

Montanez suggested using boxes to simulate the solid structures around the parking space.

There was  “nothing more annoying” for a customer than losing their presets, Montanez said.

He also said sometimes a code or phone call to a satellite radio company is necessary to get such a system working again.

Montanez said his research has found 1-3 hours worth of drive cycles might be required, depending on OEM repair procedures and the problem with the vehicle. He said it can take dozens of key cycles (turning the vehicle on and off) to clear a check engine light related to having left the vehicle running while pumping gas, “which can be annoying.”

As noted above, Montanez also offered an example of documenting such operations under a catchall line item. Based on a slide from the webinar, the estimate would contain a single 1.0-2.0 hours to “Test Drive Vehicle.”

Montanez said such language offers a repairer some “ambiguity” but he did suggest just deleting the part regarding hybrids if the vehicle wasn’t one. 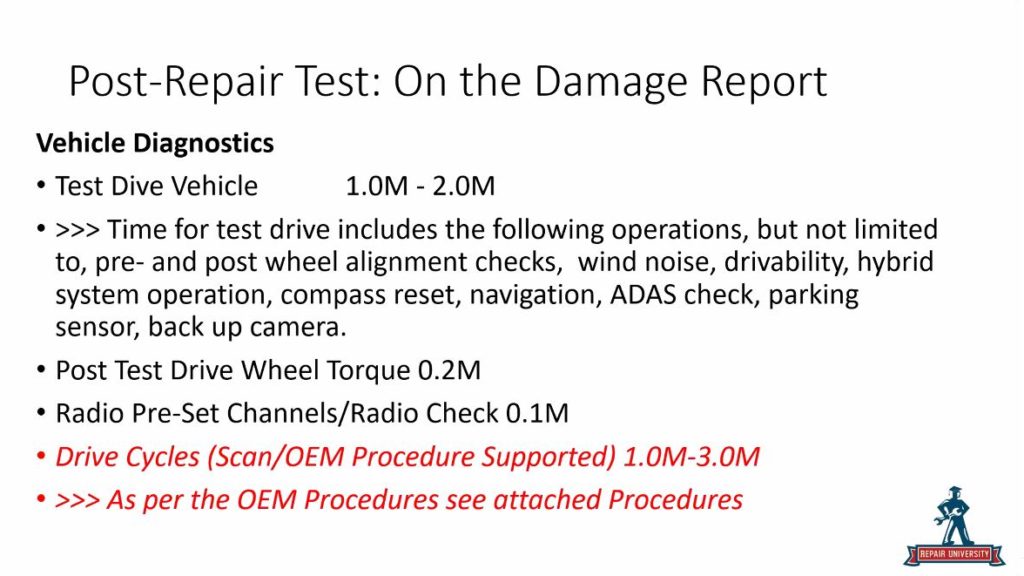 Montanez offered an aside here on the navigation reset, which wasn’t mentioned on the other slide’s list of operations. The reset could be done as part of the driving, he said. If a repairer knows they’re driving 3 miles to check everything, set a landmark at the 1.5-mile or 2-mile mark to make sure the system works, according to Montanez.

An estimate carrying such a general catchall time would still feature separate line items for the post-test drive wheel torquing radio preset resets and drive cycles, according to Montanez.

Collision Hub CEO Kristen Felder recommended breaking out individual operations. She said some repairers have encountered “sticker shock” when an estimate has what might be a single, undefined 4-5 hour block of time for “test drive car” that’s meant to encompass all the operations and possibly a second technician.

The party reviewing the estimate might balk and argue, “‘You’re really not gonna drive the car for four hours,'” she said. This could put a shop into a “negotiation situation” which is “already somewhat behind the eight ball,” she said.

Find your own times

Montanez called the times suggestions, and one exchange illustrated how repairers may need to calculate their own specific times for specific vehicles rather than reply on a stock time.

Asked about the 0.1 he’d projected for restoring radio presets — an audience member observed that it seemed low — Montanez called it merely a suggestion.

He said he found most vehicles simply demanded finding the radio station and holding down a button to set a preset.

Some vehicles only had six or 10 radio station presets, but others such as his Dodge made 18 available, and more time could be required, he said.

He gave the example of a Bentley Continental GT Coupe only offering 5 presets in each system, but a Dodge Durango RT with “18 presets for each radio thing.” If some “nutcase” actually used all 18 presets, it might take more time to restore them than dialing in a radio with just a few.

“Do it accordingly,” Montanez said.

Test-driving a vehicle could be a lengthier process as technology expands on cars. (BrianAJackson/iStock)

P&L Consultants co-owner Larry Montanez III on a Sept. 19, 2019, Collision Hub “Virtual 20 Group” offered an example of how to document with a catchall labor time for various test-drive and pre-delivery operations. (Screenshot from Collision Hub video)