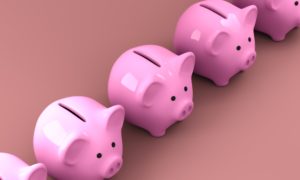 Businesses overwhelmingly agree 401(k)s help with recruiting and retention but more than half still report difficulty “communicating the benefits and encouraging participation among their employees,” Nationwide said it found in a new survey.

Nationwide said 53 percent of the 400 companies polled in August struggled on this point. The study examined businesses with between 11-500 employees who already offered a 401(k) retirement plan as a benefit.

“This number increases to 60 percent when looking at female business owners and 65 percent for younger business owners (aged 18-34 years old),” Nationwide wrote in a news release. “What’s more, 68 percent of business owners acknowledge it’s their role/responsibility to encourage employees to participate in a 401(k) offering.”

“Our latest survey shows employers are struggling to communicate the benefits of a 401(k) and encourage participation among their employees, ultimately putting their business and their employees at a disadvantage,” Nationwide Retirement Plans President Eric Stevenson said in a statement.“This data illustrates that the industry has an opportunity to help business owners bridge this gap and make a meaningful difference in the retirement security of their employees.”

Krista Lebeck, retirement education manager for the Payroll Company, said the issue flagged by Nationwide is something “we hear all the time” from companies in general about 401(k)s. Employers have difficulty explaining to staff “‘This is a value. This is a benefit.'”

Virginia Asset Management partner and certified financial planner Scott Broaddus said one option is to “really stress employee education.” However, the person providing the education doesn’t necessarily need to be the employer.

It’s often someone else teaching employees, according to Broaddus.

“They’re getting it from outside,” he said, giving a financial adviser as an example of such an educator.

Lebeck gave a similar assessment. She said that outside of financial companies, employers are “not necessarily experts” on retirement. There’s no shame in that: “They shouldn’t be.”

She recommended studying the service agreement and working with a plan adviser to deliver education in a way that works for one’s specific company. (For example, employees at a trucking firm are never going to be in the office, which demands a “very specific” education strategy.)

Lebeck said she finds “staying on top of them” most important. If you just send out an memo to staff about a 401(k) and leave it at that, it’s not going to work well. She advised making the plan something which is “constantly communicated,” with one example being at statement time.

However, a better strategy and her preference is to make meetings about the company’s 401(k) mandatory. “‘Come if you can'” just doesn’t work as well.

“I cannot stress that enough,” Lebeck said. Certain generations and populations might not understand what the 401(k) is or think they don’t need it, she said. 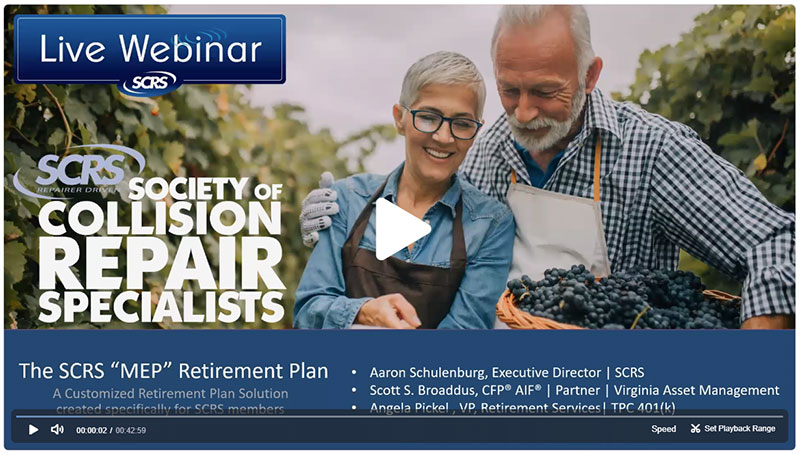 The Payroll Company finds its most successful 401(k) plans tend to be those requiring employees to attend educational meetings, she said.

Lebeck said she has addressed many such gatherings, and before she speaks, someone might declare that they don’t know why they’re there or ask to opt-out or go back to work.

After the message is conveyed, such employees have changed their mind. The sentiment becomes: “‘I’m glad I didn’t skip out'” or that an employer made them go, according to Lebeck.

If mandatory meetings aren’t possible, Lebeck suggested the employer work out a plan with their 401(k) adviser about how to drive it home. She recalled having recorded a 5-minute meeting and sending it out — giving the employer the ability to measure who actually watched it.

Whatever is communicated should be short and to the point, according to Lebeck. A flyer spanning 2-3 pages won’t be read. “Be very direct,” she said.

Stick to the main points and give an action plan such as a website to visit or number to call, Lebeck said. Make it easy to follow through, she said.

Such meetings and education become even more important if an employer isn’t planning to match part of the employees’ retirement contributions, Lebeck said. Some employees will conclude they won’t contribute to their retirement if the boss isn’t going to match it, according to Lebeck.

The meetings become more important to explain the employees are only hurting themselves by refusing to save for their retirement, according to Lebeck.

If you think you’re going to count on Social Security alone, think long and hard about the quality of life you want in your retirement. The average Social Security payment in October was $1,430.16. That works out to $17,161.92 in income a year. Even if your house is paid off, that’s probably not a ton of wiggle room to enjoy your retirement if you don’t have a retirement plan working too.

(Also, 401(k) contributions reduce an employee’s taxable income now, though your withdrawals will eventually be taxed.)

Broaddus said a common match across all businesses is to match half of what the employee contributes up to the first 6 percent of the worker’s income. (Essentially, the employer gifts you an amount worth 3 percent of your salary.)

The Nationwide study found 43 percent of the businesses polled matching 1-3 percent, 31 percent matching 4-6 percent and 19 percent matching 7 percent or more. The other 8 percent didn’t match anything. (Notably given the smaller workforce of a typical collision operation, the percentages for just the 11- to 50-employee companies weren’t much different.) 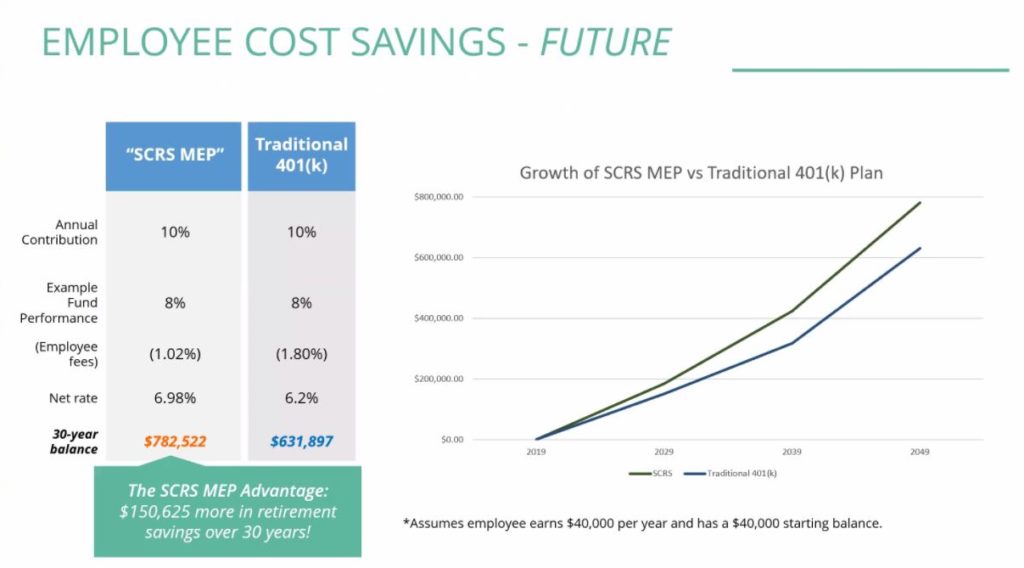 Mandatory meetings don’t need to be very long. Lebeck said you can get the point across in 5-10 minutes. Discussing the plan’s performance and experience can be “usually enough” to get attention, she said. (Broaddus in a July webinar showed how an employee making $40,000 a year socking away 10 percent into an account already holding $40,000 could mean the employee has several hundred thousand dollars at retirement.)

However, you might need to hold multiple meetings to get the 401(k) participation to the level desired, according to Lebeck, who likened it to needing three or more interactions to close a sale. Quarterly gatherings when statements come out might be one option to keep the topic on the minds of employees, she said.

There’s another, potentially easier option for everyone. Just auto-enroll employees in a 401(k) while providing them with the ability to opt-out.

Broaddus said Virginia Asset Management is seeing “a lot more companies” adopting this technique. He said the U.S. military was one of the first employers to do so, and it proved successful.

Regulators tend not to object to the concept either, according to Broaddus. The opposite might actually be the case, he said: Officials might welcome employer-based retirement savings to avoid straining government resources with retirees who haven’t put away enough money, he said. (In fact, your state might even be developing similar auto-enroll/opt-out requirements anyway.)

The biggest company in the collision repair industry already auto-enrolls employees in a 401(k) plan.

Caliber Collision’s benefits website says it automatically sticks 2 percent of an employee’s paycheck pre-tax into a 401(k), increasing the worker’s contribution 1 percent until it reaches 6 percent of income. (The company also matches up to 33 percent of that first 6 percent. “You can think about this as free money!” it notes.) If the employee ever wants to change the amount they’re automatically contributing, they can visit a website to do so, Caliber says.

Lebeck said this kind of increase in the percentage deducted is known as escalation and common in auto-enroll plans. The company usually caps the escalation at the point when 6 percent is being automatically withdrawn from a check for retirement, she said. (For example: If an auto-enrollment 401(k) plan pulled out 4 percent of a check in 2017, 5 percent in 2018 and 6 percent in 2019, it’s done escalating. It’ll pull out 6 percent again in 2020 and from then on rather than go to 7 percent, etc.)

Lebeck called herself a “firm believer” in auto-enrollment and escalation.

Broaddus said employees tend to take the “path of least resistance.” If they have to fill out forms and return them to join a 401(k), they don’t want to participate. Auto-enrolling with an opt-out clause solves this issue, he said.

It tends to drive 401(k) participation from 30-40 percent into percentages in the mid-80s, Broaddus said.

Broaddus said he felt many employers tended to speculate reasons why employees wouldn’t like auto-enrollment, but the bosses are just “overthinking it.”

Employees like it, he said, and noted that socking away an amount like 3 percent of pay through an auto-enroll wouldn’t be a dramatic reduction in income.

Besides, “it’s not like the employer’s keeping it, he said.

She recalled one employee who was auto-enrolled at her workplace but didn’t even realize it. After the employee left her job, she received a letter regarding the $5,000 she held in a retirement account, according to Lebeck.

The woman was “very pleasantly surprised” by this, Lebeck said.

Lebeck said she couldn’t recall many conversations where employees were angry about being auto-enrolled, she said.

Lebeck said she also hadn’t experienced any employees upset at being auto-enrolled by an employer who didn’t match some of the contribution.

As she described it, it could be explained that while the employer wasn’t matching at that time, the company was “‘doing things behind the scenes.'” The business was still paying fees so the employee could have a 401(k) and offering a retirement option more convenient than the employee trying to set up a plan on their own.

Broaddus said a statistic also finds a majority of employees (he couldn’t remember the exact data point) rely their on their company as a general source of financial information anyway. They think their owner knows what would be best.

The important think is to be transparent with employees, he said: I’m putting X percent of your check away into your retirement account until you tell me otherwise.

Other issues reported by employers included cost (45 percent), driving and managing worker participation (41 percent), administrative issues like paperwork (37 percent), and ignorance on how to start or maintain a 401(k) (27 percent).

Despite reports of challenges, 92 percent of the companies polled by Nationwide — and 99 percent of those whose owners were between ages 35-54 –thought a 401(k)’s benefits were worth the challenges.

“Interestingly, over three in 10 business owners aged 55+ years-old say they don’t believe there are any challenges in offering a 401(k) plan,” Nationwide wrote.

More than 80 percent of all 400 companies studied confirmed benefits like “attracting and recruiting top talent (88 percent); tax advantages for both one’s business and employees (88 percent); improving employee retention (86 percent); and employees viewing a 401(k) as a necessary benefit (84 percent),” according to Nationwide.

“Business Owners View 401(k)s as Advantageous, Yet Struggle to Communicate Benefits to Employees”

“Understanding the Benefit of Retirement Solutions for your Business”

Businesses overwhelmingly agree 401(k)s help with recruiting and retention but more than half still report difficulty “communicating the benefits and encouraging participation among their employees,” Nationwide said a it found in an August 2019 survey. (3D Animation Production Company/via Pixabay)

Virginia Asset Management partner Scott Broaddus, the investment advisor on the SCRS retirement plans, demonstrated on a July 2019 webinar how both compounded returns and investment fees could play out over time for a shop trying to go it alone versus using an SCRS plan. (Provided by SCRS)

An employer auto-enrolling employees for retirement paycheck contributions might be an easy way to get a workforce saving for retirement in the company’s 401(k)s. (DarkWorkX via Pixabay)