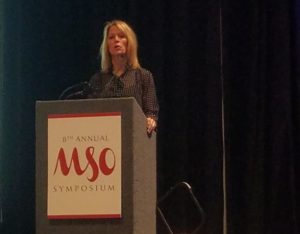 Customers on average bring nearly 11 percent of vehicles back to body shops — a proportion that rises to 26.6 percent on repairs greater than $10,000.

It’s one of several statistics that grows progressively worse for shops and insurers the more a repair costs, based on data CCC director and lead analyst Susanna Gotsch presented to the MSO Symposium on Nov. 4.

The data is relevant both as a sign of where the collision industry might improve. It’s also a potential taste of what shops might face more frequently as vehicle and repair complexity grows.

CCC in the presentation and in its 2019 “Crash Course” suggested repair cost benchmarks could be viewed as representing the degree of such complexity — not necessarily different prices charged for an identical product.

Therefore, when you see comparisons between a $500 repair and a $5,000 one, it probably shouldn’t be viewed as an identical repair that one shop happened to charge 10 times more to complete. The $5,000 repair likely reflects factors like more replaced parts, more expensive parts, and more necessary repair operations.

After all, parts and operations outside of traditional categories like body labor represented 57.4 percent of the $784 increase in the average cost of repair between 2004 and 2018, according to Gotsch’s data.

More expensive parts and greater complexity also appear to be driving increases on the front end — in the cost of buying a vehicle.

The average new vehicle loan rose to $32,119 in the second quarter, up $1,161 from April-June 2018, according to Experian. The average used vehicle loan rose $448 to $20,156 — a new high — and the percentage of people with prime or higher credit buying a used car rose to the highest proportion ever. 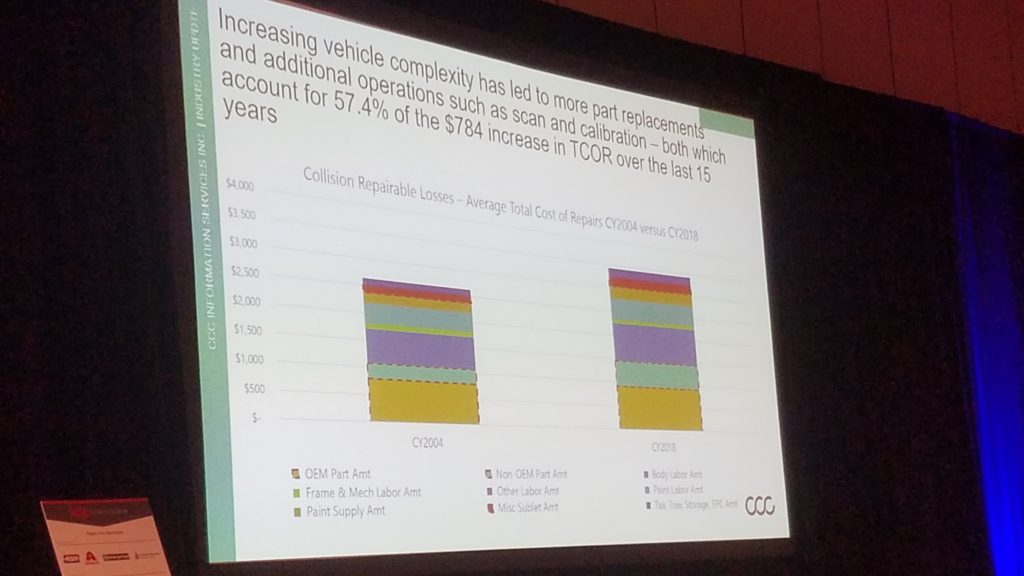 “Content is king and new-car shoppers are opting for higher trim levels and more options on a scale that we have never seen before,” Edmunds wrote in its second-quarter used car report. “The typical new vehicle purchased posts an MSRP of $10,000 over the entry-level trim; this figure is up from $6,500 in 2008.”

(Edmunds also said “these well-optioned trims often don’t maintain value any better than a base model,” which is interesting from a total loss perspective.)

The prospect that a new vehicle is becoming unaffordable is a “major area of concern” for automakers, Gotsch told the MSO Symposium.

Gotsch also said a third of Americans are rolling over their old auto loans into new ones. 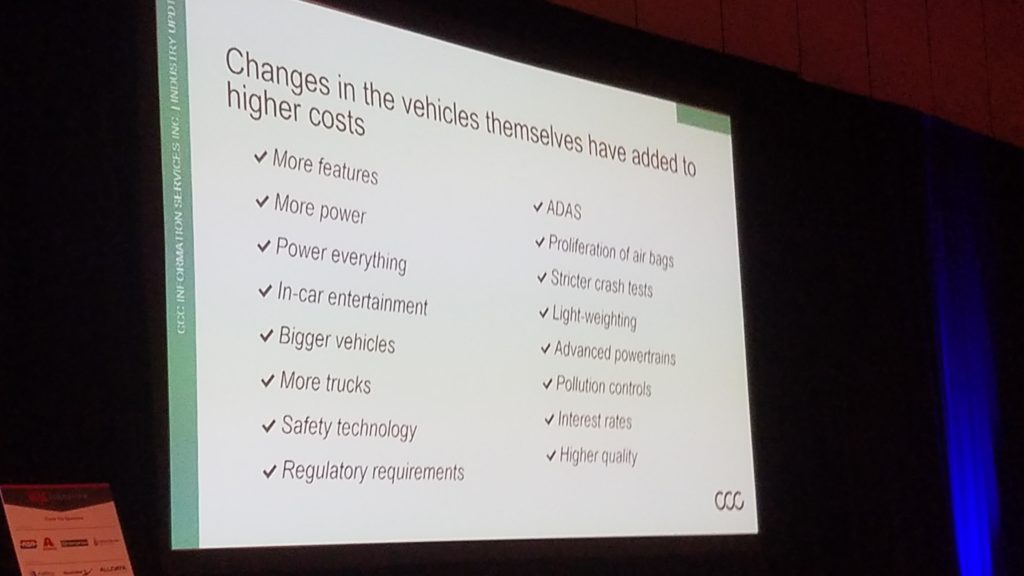 Repair costs are increasing more rapidly than in the past, according to Gotsch. Between 2007-15, repair cost rose about 2-3 percent a year, Gotsch said. But in the past two years, there’s been a “pretty significant jump,” with the latest data showing costs up 5 percent, she said.

Much of the increase is occurring in the newest model years, she said, particularly the current year and years 1-3, she said.

The average repair bill sits around $4,000 for the current model year, Gotsch said.

‘Numerous other side effects’

The higher in cost a vehicle repair, the longer the cycle time tends to be, according to Gotsch. She said longer cycle times are causing carriers to rethink rental policies, for customers are running out of their allotment.

“Numerous other side effects” also arise the higher the repair costs grows, she said.

Based on data she presented to the MSO Symposium, higher repair costs mean shops not only see cycle time, they have higher odds of blowing the delivery date promised the consumer. Shops also grow more likely to produce a customer that is less satisfied, less likely to feel as though they were kept informed (which affects satisfaction more than cycle time), and more likely to bring their vehicle back for a problem.

Gotsch said the correlation between repair cost and the reduction in percentage of customers who felt informed presents a “very real opportunity” for shops to address this with the consumer up front.

The bring-back issue seems particularly noteworthy. Besides the interesting correlation between vehicle returns and repair cost, Gotsch highlighted, the statistic seems a more accurate (if still imperfect) reflection of industry repair quality than metrics like satisfaction or even a customer’s perception of quality.

Gotsch at the MSO Symposium said a vehicle return could also prompt the customer to assign lower scores to both of those other metrics and also reduce the consumer’s satisfaction with the insurer. 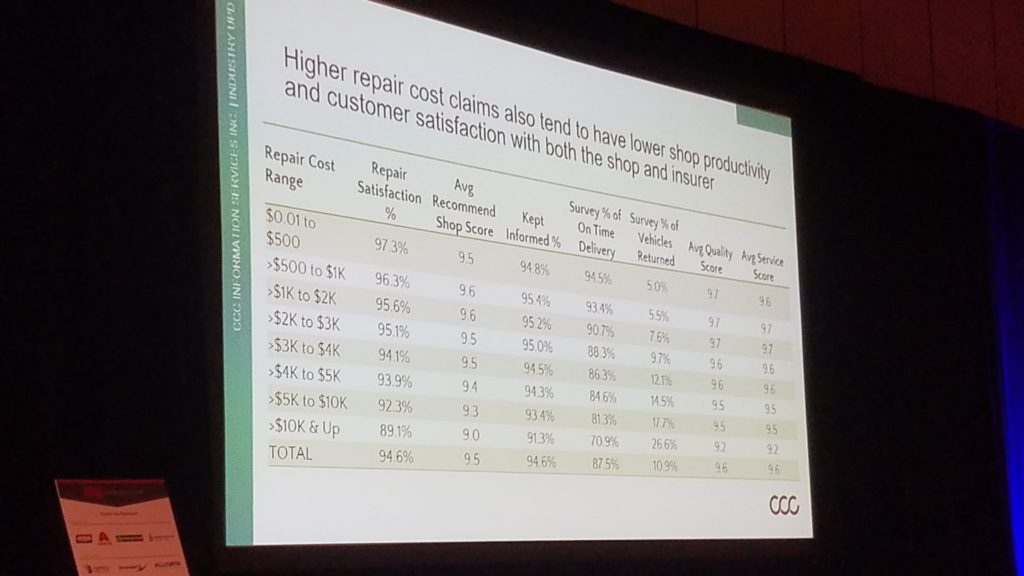 At repairs between 1 cent and $500, 5 percent of vehicles are returned to the shop for some reason, according to the CCC data.

At the $5,000-$10,000 range Gotsch said is seeing the most growth in terms of repair volume, 17.7 percent of vehicles are brought back for some reason. That’s more than one out of every six of your customers coming back with a problem.

And finally, we reach 26.6 percent of vehicles needing some sort of redo (or at least the customer thinks it does) when the repair bill exceeded $10,000.

What’s kind of interesting here is the relative lack of decline in some of the other customer experience statistics.

As noted above, those metrics do fall the higher the repair costs rise, and that overall issue shouldn’t be ignored.

They still offer average quality and average service scores of 9.2, compared to the overall average of 9.6 seen in both categories. The shop gets an average recommend score of 9.0 compared to 9.5.

Items like parts and additional operations outside of traditional concepts like body labor made up more than half of the increase in repair costs between 2004-18. (CCC slide; photo by John Huetter/Repairer Driven News)

The average new vehicle loan rose to $32,119 in the second quarter, up $1,161 from April-June 2018, according to Experian in September 2019. “Content is king and new-car shoppers are opting for higher trim levels and more options on a scale that we have never seen before,” Edmunds wrote in its second-quarter used car report. “The typical new vehicle purchased posts an MSRP of $10,000 over the entry-level trim; this figure is up from $6,500 in 2008.” (CCC slide; photo by John Huetter/Repairer Driven News)