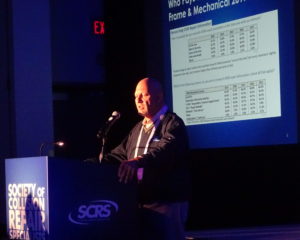 The proportion of shops reporting they research automaker repair procedures at the time of the estimate has grown to 21.5 percent, an improvement over 2015’s 16.3 percent but still too low, according to Collision Advice CEO Mike Anderson.

Anderson presented the information from Collision Advice and CRASH Network’s July 2019 “Who Pays for What?” polling during SCRS’ OEM Collision Repair Technology Summit at SEMA.

Another 32.7 percent of respondents said instead they perform that research “Most of the time,” up from 26.4 percent in 2015.

“It scares the heck out of me that there’s any indication it’s not becoming more common every year,” Anderson wrote in the study.

The survey received responses from 651 shops, but the number of repairers responding to that specific question was not disclosed during Anderson’s Nov. 7 presentation.

It’s possible given the nature of the survey (it relies on shops knowing about it and responding online) that it skews towards the industry’s more engaged shops. This could mean repair procedure usage is much lower industrywide.

Regardless, the proportion of shops always following procedures should be 100 percent, according to Anderson.

“Things absolutely change,” he said of repair procedures. One manufacturer changed the technique for installing a bedside four times last year, Anderson said. A RAV4 once had a one-time use part that Toyota late made reusable.

Consulting the OEM procedures online instead of using a static printout is necessary to capture those changes. The study asked shops to identify all the OEM repair procedure sources they used, and multiple answers were permitted. (For example, a shop could indicate staff looked up procedures sometimes on ALLDATA, sometimes on CCC and sometimes on the automaker’s official website.)

But the proportion of repairers consulting the formal OEM websites nearly doubled to 59.4 percent in 2019 from 2015’s 32.4 percent, and the proportion using I-CAR’s Repairability Technical Support portal spiked by nearly 20 percentage points to 55.4 percent in 2019. (RTS contains links to the automakers’ official websites as well as I-CAR-generated content, which is probably why their numbers seem somewhat similar over the 5 years.)

Anderson said the growth in the use of official OEM websites deserved a “round of applause” for the industry. 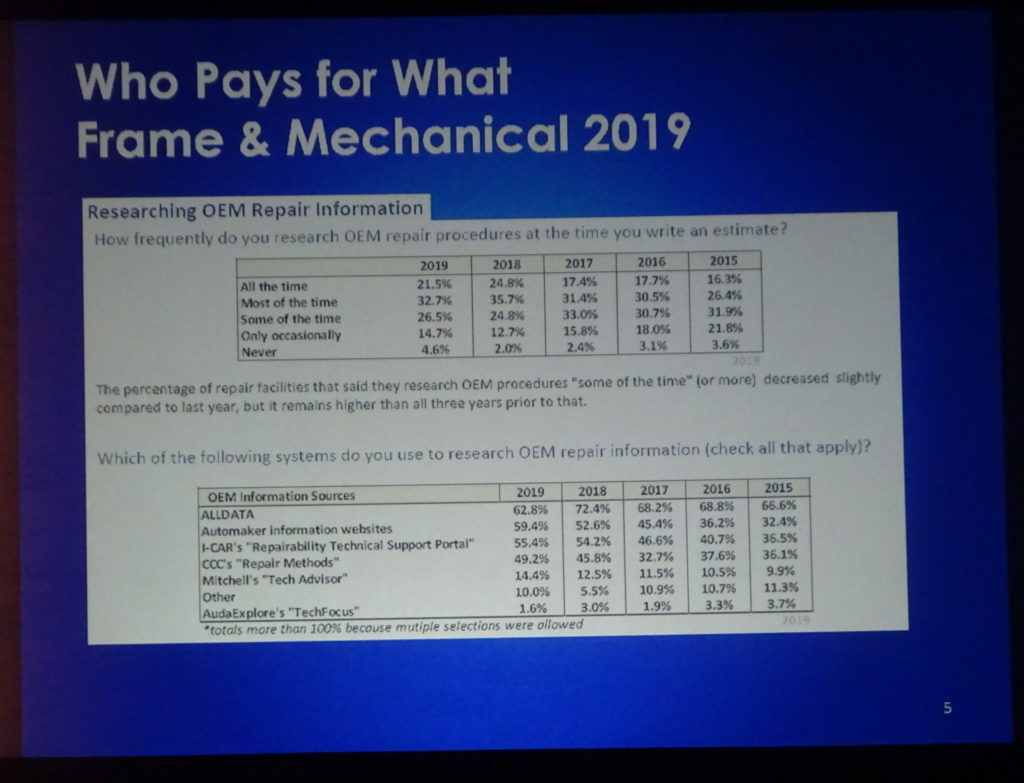 He also recommended shops use OEM1Stop, an official portal from the OEM Collision Repair Roundtable carrying links to most major automaker procedure sites as well as OEM position statements. “This is one-stop shopping,” he said. (We’d also refer shops to the National Automotive Service Task Force’s portal, which is more bare-bones but contains links to automakers like Tesla not found on OEM1Stop.)

Anderson said automakers are “absolutely committed” to supporting repairers, more than he’s ever seen in his 30-plus years in the business.

“I was guilty of that,” he said. He recalled how he used to post position statements on CollisionAdvice.com — only to be told by an automaker that he had failed to update one to a new version.

All post-collision vehicle repairs must be conducted in accordance with the repair procedures issued by the vehicle’s original equipment manufacturer (OEM), specific to that vehicle’s year, make, and model. This includes any directives contained therein relative to pre- and post-scanning of vehicle systems.

Failure to follow OEM repair procedures in the course of a post-collision repair should be considered an unauthorized modification of a vehicle and its systems, introducing the potential for bodily injury and death to any future drivers and occupants of the vehicle, as well as occupants in other motor vehicles on the roadway.

Anderson said that document alone ought to answer “90 percent” of the questions in which you asked, “‘Do I really need to do this?'”

He also provided an example illustrating this point.

Nissan told Anderson the column sported plastic collapsible bushings that can collapse or break during an accident; ergo, you needed to measure the column.

“Those engineers have a very valid reason” for the automakers’ procedures you’re questioning, Anderson said. 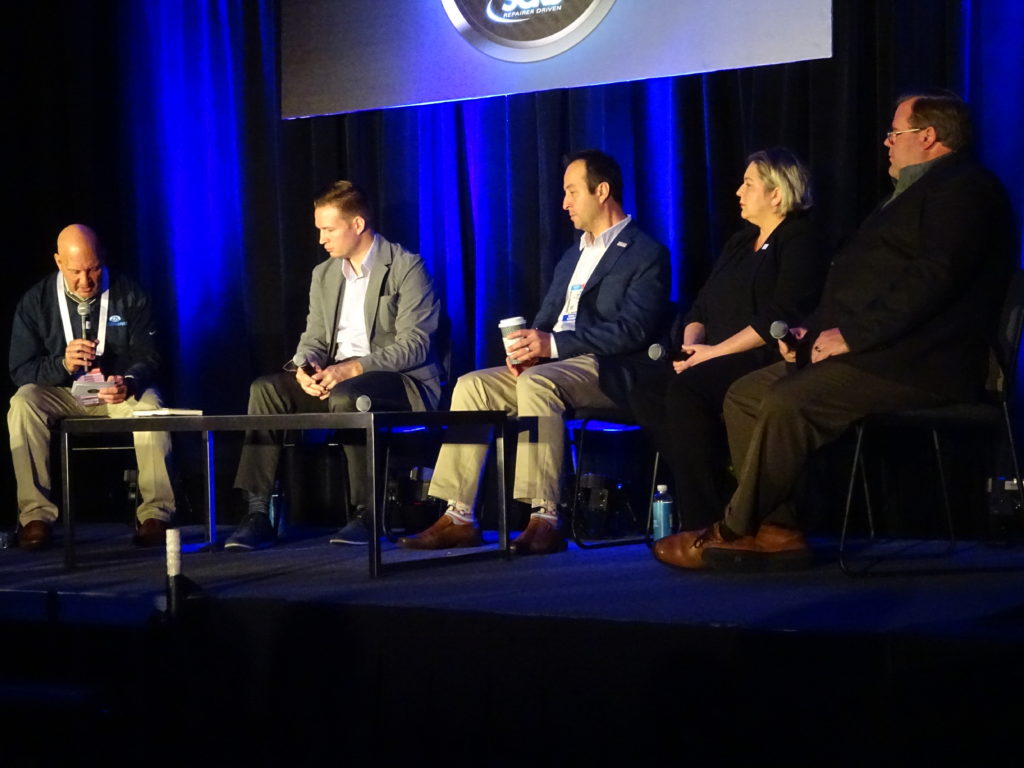 Anderson was hosting a panel featuring representatives from Subaru, Honda, Toyota and FCA. The Q&A part of the event saw an unnamed audience member write in to ask if it was necessary to use repair procedures.

“Absolutely,” Eric Mendoza of Toyota collision operations said, noting that he felt like the questioner probably already knew the answer.

Honda collision repair chief instructor Scott Kaboos said even shops which use procedures might not be using all the ones they need.

He’ll visit a shop, and it might have 26 pages of procedures printed out for replacing the quarter panel.

However, then he’ll ask a shop what else it did to replace the quarter panel. The shop will discuss other parts it handled, such as disconnecting the battery, he said. Well, Kaboos will ask, did you look up the battery disconnect procedures?

But reading those procedures would have revealed a shop must reset the steering angle sensor every time the battery was disconnected, Kaboos said. The facility might not have known that.

Past “Who Pays for What?” results

The proportion of shops reporting they research automaker repair procedures at the time of the estimate has grown to 21.5 percent, an improvement over 2015’s 16.3 percent but still too low, according to Collision Advice CEO Mike Anderson. He presented these results from the 2015-19 “Who Pays for What?” surveys by Collision Advice and Crash Network during the Nov. 7, 2019, SCRS OEM Collision Repair Technology Summit. (Collision Advice slide; photo by John Huetter/Repairer Driven News)