Besides the company’s recent parts promotion developments, the LKQ third-quarter earnings call this fall also yielded a few other items worth noting by the industry.

Here’s a roundup of other LKQ news from the call, as well as details on a devastating fire earlier this month at one of the company’s U.S. facilities.

Continuing to beat the ‘market’

Both we and LKQ treat data on auto claims frequency as a good “napkin-math” way to gauge how well a business in this industry is performing.

Basically, if your body shop — or company deriving its income from body shops — grew sales at a greater proportion than Americans got in repairable wrecks, then you’re doing better than the amount of work theoretically coming to your door anyway. If not, then you might have a problem.

LKQ CEO Dominick Zarcone said on the Oct. 31 call that LKQ’s organic North America parts and services revenue grew 2.9 percent in the third quarter over 2018’s results. He also called it a “nice sequential uptick” from the second quarter. (Special thanks to Seeking Alpha, whose transcript of the call helped us identify speakers and find quotes.)

LKQ attributed much of this to increased salvage revenue, but noted that “wholesale organic revenue growth per day exceeded the 0.5% increase in collision and liability claims.”

“Encouragingly,” CCC data put July-September at the first quarter with a year-over-year increase in repairable claims since the third quarter of 2018, Zarcone said. He said this was attributed to more miles driven under increased driver distraction and worse weather in certain markets.

LKQ grew all revenue worldwide 0.8 percent to $3.15 billion in the third quarter.

LKQ in recent quarters has focused not just on sales but on profitable sales. In fact, the vendor on the earnings call described dumping its glass arm’s battery distribution deal with FCA because LKQ felt it wasn’t delivering a good enough return.

“Margins will be going up by getting rid of that low-margin business,” Zarcone said.

Zarcone said the battery business did increase organic growth, and sales would fall this quarter and through 2020. However, dumping it would have “nominal” impact on earnings and improve PGW’s margins, he said.

“It wasn’t meeting our internal, kind of, hurdles as it relates to margins and returns,” Zarcone said. He said he thought FCA understood that, and the two companies had an “amicable kind of separation, if you will.”

That’s an important distinction body shops should remember: Sales are different from earnings.

Doing more in sales and commanding a larger market share but breaking even might not be as desirable as bringing in less revenue but having money to spare after expenses. It’s a balancing act. 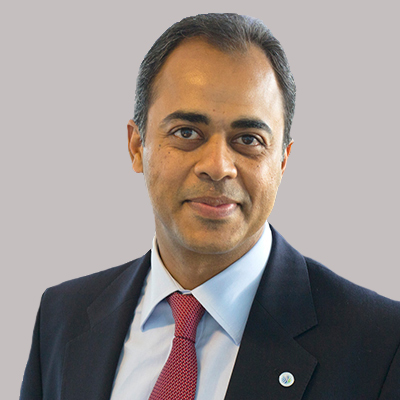 “The results speak for themselves,” he said.

He recognized the team for following through on the objective of profitability, noting that a year ago, LKQ’s EBITDA margin fell 0.7 percentage points in a quarter that had 5.2 percent organic parts and services revenue growth. The company has clawed back nearly all of that margin — and organic parts and services revenue still rose 1.4 percent, he said.

“A disciplined approach of focusing on profitable revenue growth has been a significant enabler of the year-over-year margin improvement,” Laroyia said.

He did observe that facilities expenses had grown, and the North American team was examining underperformers for “potential rationalization.”

Over the past year, the company had bought more than $352 million in LKQ stock and paid down close to $426 million in debt, Laroyia said.

The company the same day as the earnings call announced authorization to buy back another $500 billion in stock. On Friday, LKQ announced that it would be able to pay off $600 million in debt at 4.75 percent interest early, paying the principal back at what worked out to be 101.583 percent plus unpaid interest.

LKQ might also buy some smaller companies. Laroyia said it had no large transactions in the pipeline, but it was seeing “certain buying opportunities” in North America as well as in Europe.

“We will judiciously deploy that cash,” he said.

The high end of the company’s guidance estimates it could reach $1 billion in operating cash flow for the current fiscal year, according to Laroyia.

That money means a “number of very exciting opportunities,” he said.

The North American segment’s gross margins were 44.2 percent of $1.302 billion of revenue, up from 43.2 percent of $1.263 billion in 2018. The company margin on earnings before interest, taxes, depreciation and amortization stood at 12.8 percent, up from 12.2 percent. These were “among the best” margins posted in five years for North America, according to Zarcone.

He said if you threw out LKQ’s self-service results, which are facing tough scrap metal prices, margins are even better.

“Our focus on profitable revenue is working,” he said.

Laroyia said the margin expansion reflects salvage and aftermarket initiatives as well as the company’s work in its glass business to be noticed for its “quality of service” and inventory “breadth and depth.” He said LKQ also was able to renegotiate underperforming contracts.

Zarcone described some interesting moves into segments of relevance to both regular and heavy-duty collision repairers.

He said a rollout of an RV warranty program “continues to yield positive results” and was well-received at an RV open house event. The company also has finalized a designated supplier agreement to be an aftermarket parts and services provider to Cap-it Genuine Truckware stores.

And while the third quarter was “quiet” on the acquisition front, Oct. 1 saw LKQ buying another diagnostics and calibration company in North America, Zarcone said.

“This represents our second transaction in the services sector” and was “consistent with our strategy to become a leader” in the diagnostics and calibration market, he said.

LKQ suffered a blow this quarter when a fire Dec. 7 devastated one of the company’s Michigan facilities.

The Montcalm Township Fire Department posted on Facebook on Monday that the call came in before 10:30 p.m. Dec. 7, and “the fire had consumed a large portion of the buildings” already when crews reached the scene. 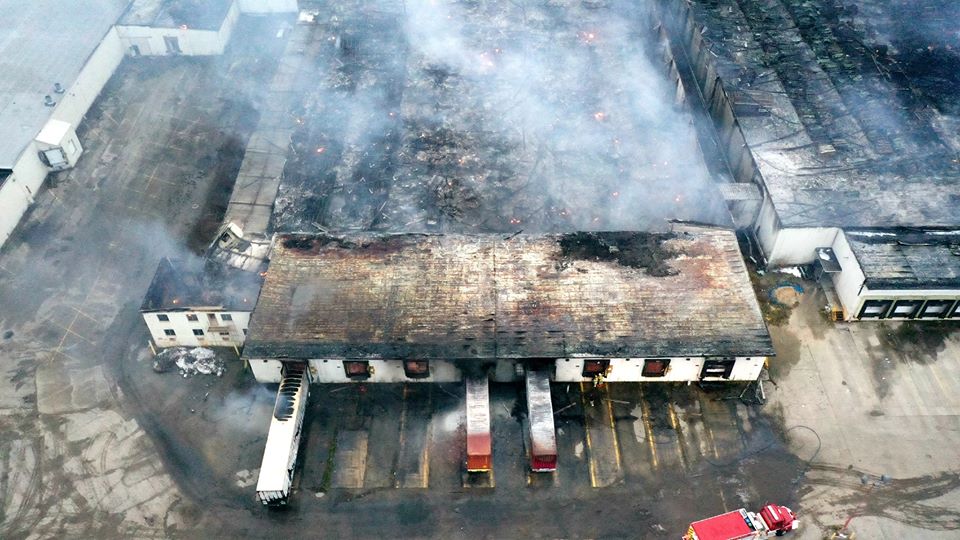 “Our department is sadden for the devastation and loss LKQ & Keystone are experiencing as a business and as a family, especially among the holidays: our thoughts are with the employees and their families,” the department wrote.

“… The Michigan State Police have been called in to assist in the investigation to the cause of the fire due to the significant loss sustained.

“Please keep all of those that have been touched by this tragedy in your thoughts as they each begin to process this loss and move forward in their personal and professional lives.”

MLive reported Dec. 8 the building spans 11 acres in Montcalm Township and was destroyed.

The Daily News reported Monday that employees hadn’t been working over the weekend and no one was thought to be inside. The newspaper said about the Keystone portion of the building employed about 60 full-time and LKQ about 80 full-time, with another 50 part-time staff combined. 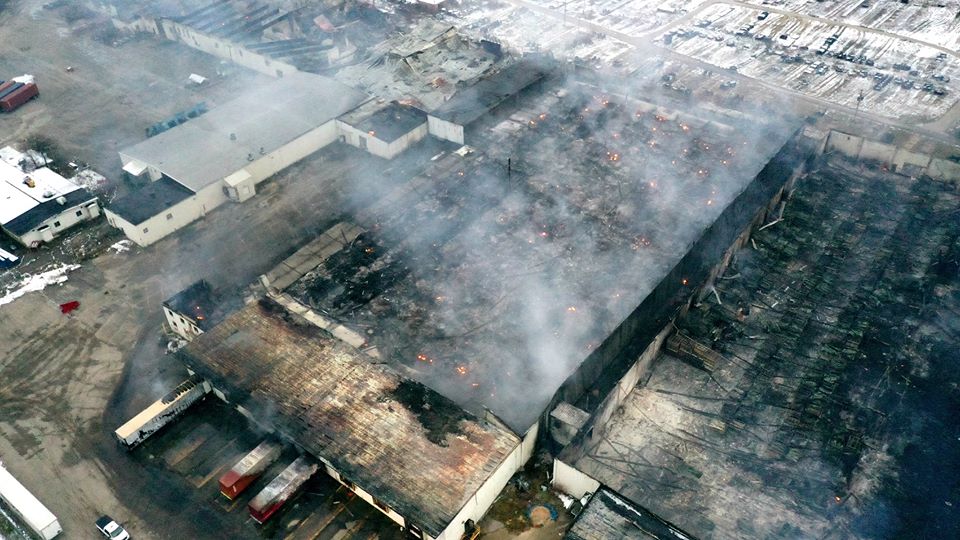 LKQ hadn’t yet responded to an inquiry Friday into which operations were housed there or what, if any, impact would be felt by customers.

MLive reported Keystone refurbished plastic parts there, and WZZM reported that Keystone has another facility in nearby Cedar Springs, Mich.

“With the wind and nature of the contents (plastics) in the structures, it was too much to try and contain,” the fire department wrote. “In the interest of safety, the operation was fought defensively; no injuries were reported.”

“‘There’s not enough water in the county for this fire’”

LKQ suffered a blow this quarter after a fire Saturday devastated one of the company’s Michigan facilities. (Duane Zamarron/AEROVIEWX)