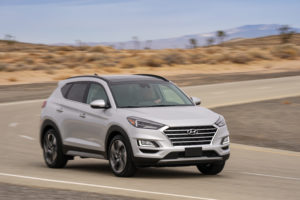 Hyundai/Genesis and Ford/Lincoln put autobraking into the hands of consumers at a dramatically higher rate in the year ending Aug. 31, the Insurance Institute for Highway Safety reported Tuesday.

The OEMs posted the highest gains in percentage of vehicles produced with autobraking when compared to the year ending Aug. 31, 2018, the IIHS said. Ford/Lincoln rose from 6 percent in the 2017-18 year to 65 percent in 2018-19, while Hyundai/Genesis jumped from 18 percent to 78 percent.

Several other manufacturers also saw notable gains towards their commitment of autobraking standard on every vehicle weighing 8,500 pounds or less by 2022.

Some OEMs already had either met the target or were outshining their rivals a year and a half ago. Tesla, Volvo, Mercedes and Toyota/Lexus were at 90 percent or higher for the 2018 reporting year, with Tesla at 100 percent. At least 60 percent of Honda/Acura, Mazda, Volkswagen, Audi and Nissan/Infiniti’s fleets also contained autobraking that year, and Subaru had been at 57 percent.

“The idea of this voluntary commitment was to get this important safety breakthrough into vehicles as fast as possible, so it’s encouraging that some automakers are beating the deadline,” IIHS Chief Research Officer David Zuby said in a statement.

Automakers share the data annually with the National Highway Traffic Safety Administration and IIHS as part of their 2016 commitment to make autobraking standard by 2022. 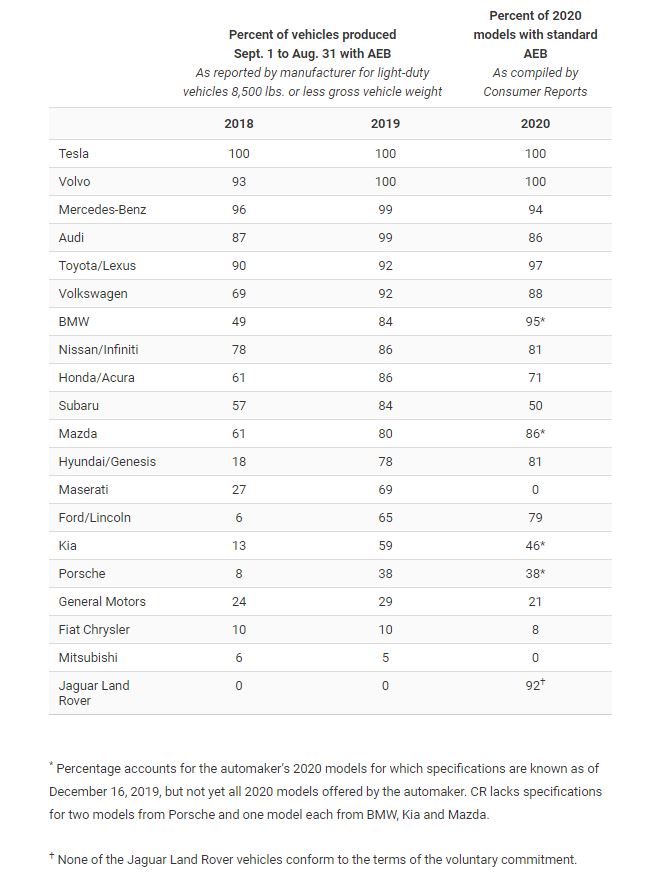 “The data reported by automakers shows that more than 9 million vehicles were equipped with AEB during this reporting period,” the IIHS wrote. “That’s about 30 percent more than the previous year. Data gathered by Consumer Reports indicates that many automakers are on track to do even better next year as they expand the number of models with AEB as standard equipment.”

The average repairable vehicle was just 5.9 years old in 2018, and by the time a vehicle reaches an average 9.66 years of age, it’s a total, according to CCC data.

Shops also need to recognize the impact the spread of the technology could have on their volume.

“IIHS estimates that the commitment will prevent 42,000 crashes and 20,000 injuries by 2025,” the IIHS wrote Tuesday. “Front crash prevention systems with both forward collision warning and automatic braking reduce rear-end crashes by half, IIHS research indicates.”

Rear-ending is a bread-and-butter collision to a body shop, so that’s a big deal. The NTSB has reported that half of all two-vehicle crashes between 2012-14 were rear-end hits.

Granted, research certainly indicates vehicle technology has a slow progression through the U.S. fleet, which means plenty of older cars still run around without stuff like autobraking and even the electronic stability control (arguably also a form of ADAS) required as of 2012.

But that’s not grounds for complacency on a body shop’s part. As demonstrated by the CCC data, body shops don’t fix the older cars — they’re on average fixing just the past 6-10 years.

“With nearly 50 percent of MY2019 vehicles now equipped with ADAS, where ADAS has been shown to reduce the most common time of accident by nearly 50 percent, back of the envelope math suggests the difference in volume share loss is likely best explained by growing ADAS prevalence,” she wrote about such a trend in September.

Though the “small but meaningful decline” in frequency due to ADAS existed, severity continued to rise, Gotsch told the webinar. She expected claim costs overall (including total losses) to be up as much as 5.5 percent, compared to a little over 4 percent last year.

“We do hope” repair costs will decline as ADAS that fails to prevent a crash at least slows the vehicle enough to cut down its severity, she said.

However, repairers who specialize in certain brands might have a longer lead time before autobraking (also known as “automatic emergency braking” or “AEB”) eats into their business or increases repair complexity.

“While some manufacturers have already met the target and most others have really stepped up their efforts, General Motors, Fiat Chrysler, Mitsubishi, and Jaguar Land Rover are letting their customers down,” Consumer Reports advocacy Vice President David Friedman said in a statement. “If these automakers continue to lag behind, it will signal the need for mandatory standards to ensure that every new car buyer is able to get this life-saving technology.”

Consumer Reports did show JLR making autobraking standard on 92 percent of its 2020 model year offerings — up from 0 percent in the year ending Aug. 31. However, according to the IIHS, “None of the Jaguar Land Rover vehicles conform to the terms of the voluntary commitment.

Hyundai made SmartSense standard on the Tuscon for the 2019 model year. The suite includes autobraking. (Provided by Hyundai)

For 15 automakers, it was better than even money that a car produced between Sept. 1, 2018, and Aug. 31, 2019, contained lifesaving autobraking technology, according to an Insurance Institute for Highway Safety report Dec.; 17, 2019. For 11 of them, the odds were 80-20 or better. Six automakers — including Toyota/Lexus and Volkswagen were at 90-100 percent. (Provided by IIHS)