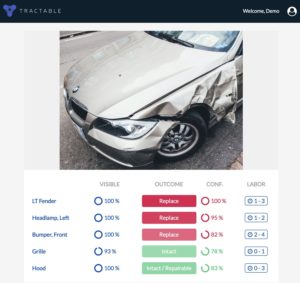 Kheyfets said shops see potential in streamlining operations to cut down on estimating time in favor of getting to the repair. They also see value in using the artificial intelligence software to determine total losses immediately or direct vehicles to the proper facility within their chain of stores.

“We have a number of major MSOs actually testing the technology right now,” Kheyfets said. She said the companies were finding “very strong results.” She called it “really exciting” for Tractable.

CEO Alex Dalyac said Tractable’s vision is for everyone in the collision repair ecosystem to have their own photo AI “calibrated as they please.”

He too said the company had experienced much interest among MSOs.

“They want to streamline their operations,” Dalyac said. They recognize that the ability to employ their own artificial intelligence could bring down the supplement rate, he said.

Asked if anyone was out of the testing phase, Kheyfets said Tractable expected “a few major MSOs live on a substantial portion” of volume in the next quarter or two.

We also asked if repairers skewed towards different use cases for the product than insurers. Kheyfets said that while body shops and insurers were different in some regards, both sectors were trying to reach agreement on a single appraisal.

She noted triage specifically as showing popularity among a subset, pointing out that “it’s a bit improvised” where a vehicle goes — it might just show up unannounced and blow the facility’s schedule. That seems to be or would be “most compelling” for an number of shops.

Asked about smaller operations, Kheyfets said Tractable welcomed them but had mostly heard from larger collision repair companies. However, the company scales pricing to volume, so it sounds like usage by a smaller shop is still feasible.

Dalyac said Tractable felt it made sense for Tractable start with larger collision companies — scale can be achieved more quickly, and such businesses “tend to be influential.” However, the company had received interest from smaller body shops, which Dalyac called “extremely helpful discussions to have.” He said Tractable’s recent $25 million funding round might help pursue more business at that more fragmented level.

“They came to SEMA to see our tech,” he said.

Tractable also on Thursday described work with the salvage industry. In September 2019, the company had announced partnerships with with LKQ and the Automotive Body Parts Association (as well as one with the U.K. auto safety researcher Thatcham).

“These partnerships are an exciting step forward for Tractable as we aid accident and disaster recovery with AI,” Dalyac said in a September 2019 statement. “Auto appraisal is a key decision-making point throughout the auto claim and fulfilment process. A visual AI assessment means many necessary decisions can now occur sooner: for example, as soon as the driver submits photos of their car. With AI and these partnerships, every American consumer can now have an unbiased auto appraiser on their phone, in their pocket.”

Kheyfets said Thursday both sides of salvage transactions had expressed interest in using the tech to vet those vehicles. Dalyac clarified that only “the buy side” was actually using Tractable right now, though there was “a lot of interest” in the sell side as well.

Dalyac also called the company’s work with the salvage sector  exciting because of the “AI training potential” there. Getting a better idea from salvage yards of what happened underneath a vehicle surface could help Tractable predict total losses sooner, he said.

Featured image: A screenshot from the Tractable artificial intelligence photo estimating company Tractable is shown. (Provided by Tractable via PRNewsFoto)