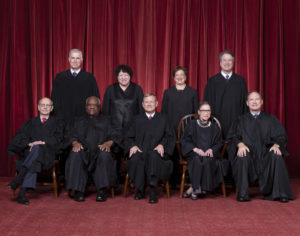 The Supreme Court on Monday declined to take up the Automotive Body Parts Association’s appeal of an unsuccessful attempt to block Ford’s use of design patents for auto body parts.

Aftermarket parts advocates have warned against automakers patenting the look of their parts to box out imitation versions. The U.S. Patent Office permits companies to seek design patents protecting an invention’s looks. These are separate from utility patents, which protect the function of an invention.

A three-judge Federal Court of Appeals panel on July 11, 2019, ruled Ford deserved design patent protection on a hood and headlight and could block ABPA members from selling imitations. The decision upheld a U.S. Eastern District of Michigan court ruling.

Ford, ironically, had even moved to dismiss the case as moot because it was willing to agree to never sue ABPA member New World for copying the hood and headlight in question. However, Judge Laurie Michelson said ABPA could sue on behalf of its members, which meant the case deserved a ruling.

“But this case is not between New World and Ford—it is between the ABPA and Ford. And so if there is a case or controversy between another ABPA member and Ford, the ABPA could pursue declaratory relief premised on that member’s ability to do so,” Michelson wrote.

She noted “Ford has refused to extend the covenant to all ABPA members and (National Autobody Parts Warehouse) specifically.”‘

On Sept. 13, 2019, that court rejected the ABPA’s request for all the judges to hear the case en banc. ABPA petitioned the Supreme Court on Feb. 10 to take up the case.

The Supreme Court indicated it would consider that request at a Friday conference. It denied certiorari on Monday.

“Here, the Federal Circuit held that repair rights and the article of manufacture should be determined solely by what Ford Global Technologies, LLC (FGTL) actually claimed,” the ABPA had argued to the Supreme Court. “However, the court did not apply its own new claiming test in its analysis, and instead selected component articles of manufacture whose complete designs had not been claimed in the design patents. The Federal Circuit’s failure to use its own claiming test was a predictable result of the defective nature of the test. As will be explained in this petition, the claiming test is contrary to the statutory framework for design patents, is contrary to this Court’s precedent, and is unworkable when applied to the many different fact patterns that can and will be presented in design patent cases. It is wrong and should be abandoned.

The ABPA released a statement on Tuesday:

In the second case, New World also is making arguments regarding functionality, the ordinary observer infringement test, and patent invalidity due to indefiniteness. Each of these issues is extremely important to the potential invalidity and unenforceability of design patents directed toward automotive body repair parts. The New World case has been fully briefed and oral argument is expected in mid to late summer of 2020.

As the ABPA noted, the similar Ford v. New World et al, remains on appeal before the Federal Circuit.

Ford had accused aftermarket parts distributor New World International and fellow defendants Auto Lighthouse Plus and United Commerce Centers (both of which were tied to New World) of selling auto parts infringing on Ford’s design patents.

Northern Texas District Judge David Godbey on March 12, 2018, had approved Ford’s motion for infringement summary judgment on functionality and exhaustion. Ford said Godbey’s summary judgment was pending a jury decision on invalidity. On Nov. 16, 2018, a jury ruled for Ford on 13 willful auto body part infringement counts and awarded the OEM $493,057. Ford also requested and won items like $2,108,672.50 in attorney fees and $41,721.60 in profits in April 2019.

The 13 design patents in that case included a headlight, grille, hood outer and side mirror for a 2004 F-150 and two front fascias, two rear fascias, a hood, a taillight, a side mirror, a fender outer, two bumpers and a headlight for the 2005 Mustang.

As of February 2019, all but four of the patents had expired.

New World and the other defendants told the Federal Court of Appeals that none of Ford’s 13 real-world versions of the parts actually looked like the images in the design patents, offering three examples. New World also said all 13 “contain substantial inconsistencies between the drawings, or between the drawings and written descriptions or title as shown by the intrinsic evidence alone,” providing three examples.

It noted that the jury had even sent a note describing the inconsistency between an accused Mustang headlight and the actual Ford patent.

“(O)n Patent No. D582,065 we consider that New World [NWI] didn’t willfully infringe because the patent is inconsistent with the actual product,” the jury wrote. New World provided this diagram to the Federal Appeals Court: 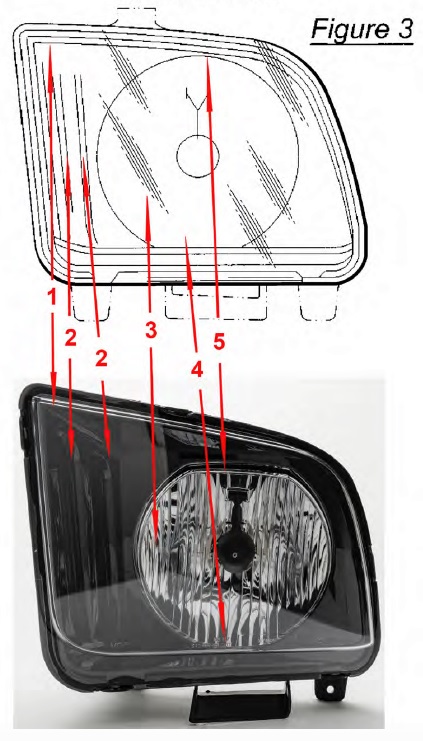 New World moved for reconsideration on the infringement summary judgment, but the court said it would stand by its ruling, though “I can certainly understand how this note would prompt you to make such a motion.”

“Ford’s design patents are valid,” Ford wrote to the appeals court. “The jury heard ample evidence that the alleged ‘inconsistencies’ New World identified in the patents did not exist or were minor and immaterial. It was thus entitled to find that the patents were definite. To the extent New World argues that the District Court applied the wrong legal standard, that argument is forfeited and irrelevant because it has never identified any prejudice based on the different standard. New World’s enablement argument is also forfeited because New World did not raise it at trial. And New World’s functionality argument is foreclosed by this Court’s decision in ABPA.

“In any event, New World never grapples with two important realities. The jury was instructed, properly, that a patent is presumed to be valid and must be proven invalid by clear and convincing evidence. And the jury was instructed, again properly, that mere imprecision does not make a claim indefinite. … Given this, the jury reasonably could have concluded that New World’s alleged inconsistencies were minor and that the claims as a whole could be understood.”

The parties have submitted conflict dates and await oral argument before the appellate court.

Design patents on a headlamp and hood on the 2004-08 Ford F-150 were the subject of a July 2019 Federal Circuit Appeals Court decision. The Supreme Court in 2020 refused to grant certiorari.  (Provided by Ford via Federal Circuit Court)

New World International and co-defendants Auto Lighthouse Plus and United Commerce Centers have argued to the Federal Court of Appeals that this design patent drawing differs too greatly from one of the accused Mustang parts at the heart of a Ford patent lawsuit. Markings added by New World et al. (Provided by Federal Circuit Court)