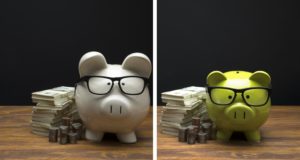 Are you considering switching retirement plan providers but are worried about hurting your “401(k) guy”?

Virginia Asset Management partner and certified financial planner Scott Broaddus, who has been contracted to assist on the 401(k) option SCRS offers industry employers, told the webinar audience shop concerns about an existing provider can be a barrier to switching 401(k) plans. (If you don’t have a 401(k) at all but are considering launching one, check out the webinar “Starting a New Retirement Plan with SCRS” on Tuesday at 2 p.m. ET. Both SCRS members and nonmembers are welcome. )

Broaddus said a common question he’s encountered from the industry involves a repairer’s existing relationship with a financial or investment adviser. Often, that party will assist with the businesses’ 401(k). A couple of repairers have acknowledged that switching to the SCRS option would save money, but cite their relationship with the existing provider and worry they’re hurting the latter financially, Broaddus said on the Feb. 16 webinar.

Providers understand — and it might be a fiduciary duty

Broaddus said that based on a couple of instances, “what we typically find” is that switching ultimately isn’t “that big of a deal.” The existing adviser still works with the employer on other investments, and the adviser agrees that they too would switch 401(k)s were they in the shop owner’s shoes, according to Broaddus.

An employer offering a 401(k) is obligated to serve as the fiduciary, which means they must legally act in employees’ best interests, according to Broaddus. Employers are required to shop their plans every three years to see if a better deal exists, he said.

“No one’s gonna fault you” for trying to lower expenses for employees, Broaddus said.

In fact, “we’ve had advisers be very helpful” with the transition, according to Broaddus.

Broaddus, who earlier described working on nearly sixty 401(k)s besides SCRS’, shared an anecdote from his own career. He said he once had to tell a company that he couldn’t deliver the same kind of savings as a competitor on a retirement plan covering $1-$2 million in assets.

Broaddus said his response to the business was “‘as much as I hate to lose you, it’s absolutely the right thing to do'” to switch.

“It doesn’t impact the rest of that relationship,” he said.

The SCRS plan pools the assets of all participating member companies to demand a better deal than the individual businesses could secure on their own. It included about $10 million in collective retirement savings, Broaddus said on the Feb. 16 webinar.

The organization has negotiated declining fees as that amount grows (i.e., more employees’ retirement savings are overseen by the plan) — a concession that Broaddus said can be rare to obtain. SCRS’ $10 million in assets is currently charged 1.02 percent. At $15 million in assets, participants will only be charged 0.93 percent. At $50 million, only 0.73 percent will be lost to fees. Broaddus said the plan was to reach $15-$20 million later in the year.

Broaddus said a prior study found SCRS members’s companies averaged about 1.8 percent in fees on 401(k)s with less than $2.5 million in assets.

The lower the administrative fee, the more money employers save. Broaddus provided an example of how a 401(k) charging 1.02 percent fee instead of 1.8 percent would add up to more than $150,000 more saved by an employee over 30 years.

Broaddus said they have seen employees remark “‘This is way cheaper'” after their employer switched to the SCRS option. 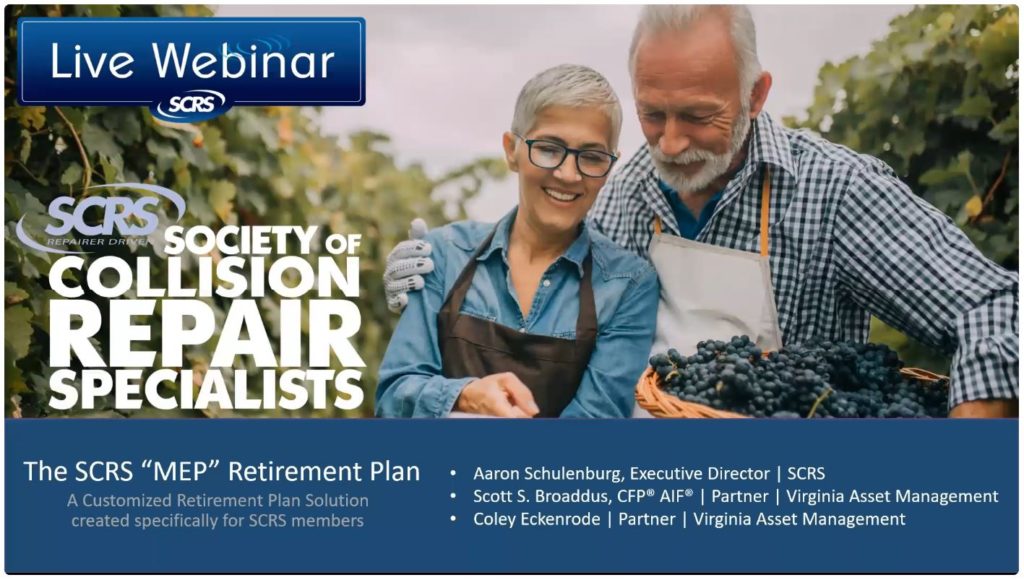 The No. 1 question from repairers might be a sense that their existing 401(k) plan “‘doesn’t feel broken,'” Broaddus said. But most companies have “no clue” what they’re paying for a 401(k), he said. (If this sounds like your shop, request or dig out a 408 form from your provider. Broaddus said all 401(k) vendors must give clients a copy of the fee-disclosing document annually.)

SCRS members and nonmembers are welcome to check and see if the organization’s 401(k) could offer a better deal. Broaddus estimated they’d probably handled 40-50 such evaluations over the past year.

Broaddus said that if you already had an “amazing deal … let us tell you that.” He said he would be the first to tell a business “‘You are perfect'” and “‘Keep it as is.'” This is something you can keep in your fiduciary file, he said.

Most companies who switched to the SCRS plan are seeing “10 percent-plus” in savings, and “a lot” find an 18-25 percent improvement, according to Broaddus. One company even experienced a 38 percent savings, he said.

In addition to potentially costing employees more, your existing 401(k) provider might also lack the expertise to serve them properly.

Broaddus said many financial advisers work on 401(k) plans without being specifically in the “401(k) business.” Some “pretty glaring” omissions or structures requiring an update have been found with the plans that have switched. It’s important to know the options and “corners” possible with a 401(k), he said.

Another concern might be the issue of in-person investment advice to employees. Broaddus described working with one body shop that found it appealing that their current provider would physically visit the facility’s remote location. But when Virginia Asset Management reviewed the last 90 days of interactions, the few which had occurred all did so over phone or email.

Virginia Asset Management can set up screensharing, webinars or conference calls to assist employees with their plans.

“No one has not enrolled” in the SCRS 401(k) because of a lack of onsite presence, Broaddus said.

It still might be possible to secure that in-person touch and use the SCRS plan. One company which would have saved $6,000 by moving to SCRS found an investment adviser which would charge them $500 for two hours on-site. Broaddus said this was incorporated as a plan expense, and so the company wound up saving $5,500 through switching.

Featured image: Your current 401(k) provider might be more understanding of you leaving for another vendor than you might expect. (skodonnell/iStock)