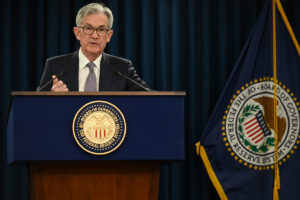 The Federal Reserve on Thursday announced it would promote small-business loans by spending $600 billion to buy 95 percent of low-interest loans made under a new “Main Street Lending Program.”

Companies with up to 10,000 employees or up to $2.5 billion in 2019 revenues are eligible for the program, which was part of the $2.3 trillion aid plan the Fed announced Thursday.

“Our country’s highest priority must be to address this public health crisis, providing care for the ill and limiting the further spread of the virus,” Federal Reserve Chairman Jerome Powell said in a statement. “The Fed’s role is to provide as much relief and stability as we can during this period of constrained economic activity, and our actions today will help ensure that the eventual recovery is as vigorous as possible.”

Main Street borrowers must take out a loan for at least $1 million.

“Eligible banks may originate new Main Street loans or use Main Street loans to increase the size of existing loans to businesses,” the Fed explained in a news release Thursday. “Banks will retain a 5 percent share, selling the remaining 95 percent to the Main Street facility, which will purchase up to $600 billion of loans.”

Borrowers must have been “in good financial standing before the crisis.”

The loans will mature in four years, with payments able to be deferred for one of the years. Interest is adjustable, calculated at the Secured Overnight Financing Rate plus 2.5-4 percentage points. (250-400 basis points) According to the New York Fed, the SOFR stood at 0.1 percent on Wednesday. There’s no penalty for prepayment.

You can’t use the loans to refinance existing debt. However, you can apply for the loans even if you’ve received or applied for a Paycheck Protection Program loan, according to the Fed.

“Firms seeking Main Street loans must commit to make reasonable efforts to maintain payroll and retain workers,” the Fed wrote in a news release Thursday. However, there’s not an incentive like the Paycheck Protection Program, which forgives the whole loan if small businesses preserve staff and wages.

The Main Street terms aren’t completely set in stone, and the Fed is seeking public comment from Americans until April 16.

“The Federal Reserve and the Treasury recognize that businesses vary widely in their financing needs, particularly at this time, and, as the program is being finalized, will continue to seek input from lenders, borrowers, and other stakeholders to make sure the program supports the economy as effectively and efficiently as possible while also safeguarding taxpayer funds.”

“Federal Reserve takes additional actions to provide up to $2.3 trillion in loans to support the economy”