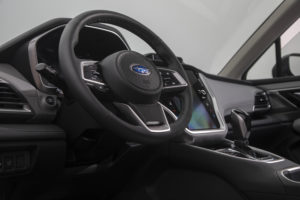 Subaru recently adjusted its position statement on pre- and post-collision repair scanning to now spell out what constitutes a “collision.”

The automaker continues to require pre-repair and post-repair scanning on “Subaru vehicles from model year 2004 and forward involved in a collision.”

The revised March 2020 position statement also adds that “Some safety and driver assistive systems will require inspections, calibration, and/or aiming after collision or other body repairs.”

In an an interview Thursday that brought up the “collision” definition, Subaru national wholesale parts manager John Lancaster called it the “bane of our existence.” The company has drawn attention for the extensive inspections it requires after a crash, even though “it’s been in there (repair procedures) 20 years.”

The position statement language was meant to help the situation, he said.

Subaru is not the only OEM requiring safety inspections after a collision, and to Lancaster’s point, it’s imperative shops consult not just position statements but each OEM’s repair procedures to research this and other repair considerations.

“This is not new,” Vehicle Collision Experts CEO Mark Olson told an SCRS open board meeting in 2019. And “this is not just Subaru,” he said.

It was General Motors, FCA, and other automakers, Olson said then. (In fact, a GM 2014 position on inspections also referenced DTCs two years before repairers discovered scanning, which just emphasizes that repairers need to conduct better research.)

“If a collision repair is necessary, Subaru of America, Inc. strongly recommends using Genuine Subaru replacement body parts, mechanical components, and electrical parts including all safety devices such as airbags and seatbelts,” the OEM wrote. “The use of Genuine Subaru original parts will help ensure the vehicle is restored back to its original pre-collision condition and the structural integrity of the vehicle will perform as it was designed and tested in the event of another collision. The safety of our customers is our number one priority.”

Subaru continues to recommend in the position statement that repairers scan using an official SSM4 scan tool. If that’s not available, use an asTech, the OEM recommends. That tool connects a vehicle remotely to an official Subaru scan tool housed at an asTech facility.

Some scan tool manufacturers sell devices compatible with the SAE J-2534 standard, which allows the tool to run official OEM scanning software instead of a third-party option. Lancaster explained in a 2019 discussion of certified shop equipment that J-2534 only worked for newer SSM4 vehicles. However, “cars older than the 2015-2016 era” used SSM3 scan software that wasn’t J-2534-compatible, he wrote at the time. This was still the case, Lancaster confirmed Thursday.