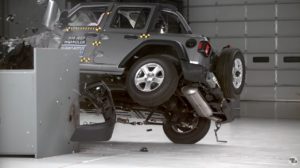 The Insurance Institute for Highway Safety awarded the next-generation 2019-20 Wrangler a “marginal” rating on the small-overlap crash test after the impact mysteriously tipped the Jeep over on its passenger side in two test runs.

FCA, who had earlier submitted a successful crash test to the IIHS, said it had never encountered such an incident in the real-world. The four-door 2019 Jeep Wrangler Unlimited gets four out of five stars from the National Highway Traffic Safety Administration for frontal crashes.

“FCA has produced more than 500,000 of these vehicles. By conservative estimate, they have accounted for 6.7 billion miles of on-road driving,” FCA said in a statement. “From this population, we are unaware of any incidents that correlate with the vehicle dynamic portion of the IIHS test result. With more than 75 available safety and security features, the Jeep Wrangler Unlimited meets or exceeds all federal safety standards and continues to win acclaim from news organizations and consumer groups. Since its 2017 introduction, the vehicle has earned one award nearly every eight weeks for attributes ranging from capability to residual value, and for achievements such as highest customer loyalty and SUV of the year. No single test determines vehicle safety. FCA routinely monitors third-party evaluations and factors such findings into our product-development process. We design our vehicles for real-world performance. And real-world data, along with continuing demand, indicate the Jeep Wrangler Unlimited meets or exceeds customer expectations.

The IIHS said the 2019 Wrangler aced all other crash tests and would be considered to have done well on the small-overlap driver’s side test had it not toppled over.

“The Wrangler performed well by the normal metrics used to evaluate performance in the driver-side small overlap test,” the IIHS wrote. “The driver’s space was maintained well, and the dummy’s movement was well-controlled. However, the partial rollover presents an additional injury risk beyond what the standard criteria are intended to measure. A vehicle tipping onto its side is not an acceptable outcome for a frontal crash, and as a result, the Wrangler’s overall rating was downgraded to marginal.

“Rollovers — even partial ones like those that occurred in the Wrangler tests — are especially dangerous crashes, in part due to the risk of complete or partial ejection. This is a particular concern in the Wrangler, which has a roof and doors that can be removed. The Wrangler also lacks side curtain airbags designed to deploy in a rollover to keep occupants inside. It is not required by regulation to have side curtain airbags because of its removable roof.”

Even though we’re talking about an lab crash test, the incident brought to mind a couple of best practices for auto body shops.

First, make sure you’re measuring, evaluating and restoring the entire vehicle after a collision per OEM procedures. Dot those Is and cross those Ts — in case something happens that nobody foresaw.

In the famous Seebachan v. John Eagle Collision case, Marcia Seebachan said her first inkling something was amiss came when a friend pointed out that cars weren’t supposed to catch on fire after a collision. Their attorney handling health-related insurance issues also looked at the Fit and said,”‘This just doesn’t look right,’” Seebachan said. The attorney asked if he could tow it to attorney Todd Tracy, who ultimately investigated first Honda and then John Eagle Collision for potential errors.

Hence if something unexpected and unintended happens in a collision — such as a vehicle mysteriously falling on its side — and either an OEM or a plaintiff’s attorney starts examining the incident, your work had better be impeccable.

In the Seebachan case, the jury found that the body shop’s deviation from OEM procedures was to blame for 75 percent of the Seebachans’ ordeal. (The other driver was deemed 25 percent at blame.)

Besides the potential that one’s work was the catalyst for the unexpected outcome, there’s also the risk that a repairer’s oversight compromised something that could have minimized the severity of an incident.

In this case, FCA obviously didn’t engineer falling onto the passenger side into the Jeep Wrangler’s crash management strategy. But the passenger side’s vehicle structure and/or technology is probably going to provide some protection when something weird happens.

Let’s say you fixed a Jeep Wrangler after a small-overlap crash that saw the vehicle behave as FCA intended. (For example, after the successful crash test FCA had conducted on the vehicle.) Then it gets into another crash and behaves as the IIHS encountered. You’d hate to have reduced any safety potential with a repair that had focused on the obvious damage on the driver’s side — and didn’t bother check for damage on the passenger side.

Such an oversight can occur if the repairer merely assumes the visible damage at the point of impact is all that’s wrong with the vehicle. You’ll notice from the IIHS video that the passenger side of the Wrangler “ripples” from the driver-side impact. The same occurs during the driver-side small-overlap crash-test of the prior generation 2015 Wrangler, which scored a “good” and didn’t tip. If a repairer isn’t measuring and inspecting to look for the effects of such crash energy flow, something might be overlooked.

Second, check those repair procedures anew on every vehicle. FCA didn’t directly respond to our inquiry as to potential changes it planned to the Wrangler, but it’s possible the OEM could alter the structural or mechanical engineering to improve future IIHS performance following this high-profile incident.

If it does so and adjusts the repair procedures accordingly, your printout or memories of instructions on a Jeep Wrangler earlier in the production run might no longer apply. Don’t assume that vehicle refreshes and new generations are the only time repair procedures could change.

The IIHS said FCA had earned the right to submit its own driver-side small-overlap video and documentation since the previous-generation Wrangler scored a “good.”

The organization ran its own test as one of its periodic audits of OEM submitted results.

The small-overlap crash test smacks the outer 25 percent of the vehicle’s front into a 5-foot barrier at 40 mph.

“Since the Institute only started evaluating vehicles for protection in small overlap frontal crashes in 2012, we don’t have comparable data on how vehicles with good small overlap ratings fare in the real world,” the IIHS writes.

Insurance Institute for Highway Safety, May 7, 2020