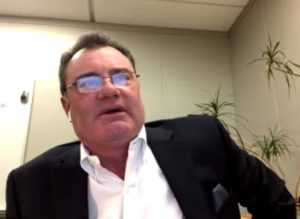 This would probably happen in the first quarter of 2021, he said.

“We believe that that’s what our customers’re asking for, and that’s what we’re gonna give ’em,” he said.

The move by the nation’s No. 1 insurer could increase overall awareness of the concept of OEM networks — something one automaker’s research indeed suggests customers value. This increased consumer knowledge could be a positive for the certified segment of the collision industry, regardless of DRP status, and speed up the time to certification ROI for them.

Moderator Stephen Applebaum, managing partner of Insurance Solutions Group, had asked the carriers if “certification programs — of any kind” factored into their direct repair programs.

Allstate auto line director Sandee Lindorfer, who spoke first, noted that Allstate had required I-CAR Gold Class status for about a decade and called that training critical for safe repairs.

“On that certification, we’ve been behind that for quite some time,” she said.

Evans, who spoke second, focused on OEM certification and announced the new locator information. He said State Farm didn’t require automaker network participation for Select Service shops, but it was exploring the concept of OEM certification.

“It’s not going away,” Evans said.

He called it “really about the customer.” What did customers want, and were they pursuing OEM certification? State Farm saw an “increasing trend in that direction,” he said. “… We are serious about it.”

USAA auto claims AVP and senior experience owner Patrick Burnett called a repairer’s I-CAR education “table stakes” for his insurer’s DRP. (This appeared to be a reference to Gold Class status.) While his company didn’t require OEM certification, “we encourage it.”

He said USAA wanted to partner with shops demonstrating a commitment to the “right thing.”

“From a member perspective … we want to make sure we have a healthy balance of repair facilities that are capable of getting vehicles repaired properly, quickly and in alignment with the appropriate standard,” he said.

“OEM certs do matter,” he said. “… While it isn’t a requirement, it certainly is beneficial.”

He called it important that the company supported its certified direct repair program facilities with volume “so that that moves to their body shops.”