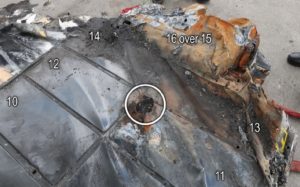 A new National Transportation Safety Board report on the risk of lithium-ion battery fires for towing professionals and first responders offers potential safety lessons for body shops as well.

“… The energy remaining in a damaged high-voltage lithium-ion battery, known as stranded energy, poses a risk of electric shock and creates the potential for thermal runaway that can result in battery reignition and fire.”

Standards exist for mitigating the battery risk in survivable crashes — but they assume a level of vehicle access that might not be possible in a high-severity crash or at the crash scene, according to the NTSB. Standards today also “do not currently address high-speed, high-severity crashes resulting in damage to a high-voltage lithium-ion battery and the associated stranded energy in the high-voltage system,” the NTSB wrote.

The agency doesn’t appear to have studied the quality of EV safety instructions within OEM service information, so it’s unclear if the information the NTSB lists as present or absent in first responder guides can be found within the OEM repair procedures.

Nevertheless, body shops might wish to study the NTSB report and the emergency responder guides (potentially if OEMs listen to the NTSB and bolster the latter) on top of OEM procedures.

The NTSB has already made a similar recommendation to the towing industry, advising the Towing and Recovery Association of America to “Inform your members about the circumstances of the fire risks described in this report and the guidance available to emergency personnel who respond to high-voltage lithium-ion battery fires in electric vehicles.”

For example, the report carries some interesting tips from SAE J2990 on inspecting, storing and transporting a battery. This included quoting a nine-step inspection process from the SAE standard and describing at least some of the standard’s towing and storage discussion:

SAE J2990 recommends towing a damaged electric vehicle on a flatbed, to avoid generating voltage from the turning wheels. If the vehicle’s wheels must be turned—because it has run off the road, for example—its speed should be kept below 5 mph. After being loaded onto a tow truck, the vehicle’s structural integrity should be checked. If the vehicle rolls while it is on the tow truck, the inspection steps listed above should be repeated.

SAE J2990 states that tow operators should arrange to tow the vehicle to an offsite location where it can be isolated. Once there, the vehicle should be inspected again. It should also be inspected for evidence of internal battery leaks, which could lead to short circuits or loss of high-voltage isolation, and the battery should be examined for loss of mechanical integrity. If airbags have deployed, further diagnostic steps should be conducted to assess the integrity of the high-voltage system, such as measuring the battery temperature.

SAE J2990 recommends two barrier methods for an electric vehicle during storage: (1) separate the vehicle from combustibles and structures by 50 feet on all sides, or (2) create a barrier of earth, steel, concrete, or solid masonry around the vehicle.

“The (OEM EV responder) guidance documents generally limit their advice to calling the manufacturer for instructions or leaving at least 50 feet of clearance around the vehicle,” the NTSB wrote. “The NTSB considers that advice impractical at best. Given the SAE’s recommendation to also consider isolating a damaged electric vehicle inside a barrier of earth, steel, concrete, or masonry, manufacturers might consider including such an alternative in their guidance.”

The other involves a phenomenon known as thermal runaway, in which pressure and temperature rises unchecked and can produce “venting and combustion of toxic gases, cell rupture and release of projectiles, and battery reignition/fire,” according to the NTSB. The heat from a fire bolsters the reaction and escalates it, the agency said.

Nickel-metal-hydride batteries — the kind originally used in hybrids and still in use today on some vehicles — pose less of a fire risk than lithium-ion ones, Coordinating Committee for Automotive Repair safety content author Bob McGinn has said. “NiMH batteries do not contain a flammable electrolyte,” the NTSB noted in its report.

A crash produces the kind of conditions that can lead to thermal runaway for a lithium-ion battery, according to the NTSB.

“The originating cause of thermal runaway is generally short-circuiting inside a battery cell and a resulting increase in the cell’s internal temperature,” the agency wrote. “A short circuit in a lithium-ion battery cell can result from defects introduced during manufacturing, such as contamination, or from damage to the cell caused by crushing or puncturing—precisely the kind of damage produced by high-impact, high-severity car crashes. An external fire might also heat a battery cell enough to initiate thermal runaway.”

The whole point of a battery is to store energy, and this also can pose an issue. According to the NTSB, a damaged battery can leave cells charged with energy “with no path to discharge it.” Because of this stranded energy, the battery might keep on reigniting itself even after an initial fire is extinguished.

In addition, electric vehicle handling protocols for first responders can involve cutting cables to isolate the power within the battery. Unfortunately, this also leaves the battery full of stranded energy with no way to remove that power.

“Manufacturers have developed tools to drain the high-voltage batteries in their vehicles, but the tools, which require a specialist to operate, are usually specific to the vehicle and work only on an intact battery,” the NTSB wrote.

The NTSB chronicled three reigniting high-voltage batteries it investigated between August 2017 and 2018. All three were Tesla batteries

“The fire under the SUV appeared to be extinguished but then reignited an unspecified number of times,” the NTSB wrote. Firefighters identified the fire source as the battery pack, which reignited again after the Model X was brought onto the home’s driveway. After being extinguished, the Model X sat stable for 45 minutes — then “began burning in what firefighters described as a ‘blowtorch’ manner.” Eventually, firefighters extinguished the blaze after at one point letting it try and burn itself down for a while.

“One of the responding battalion chiefs told investigators that the fire was ‘very severe’ and more difficult to extinguish than firefighters expected,” the NTSB wrote. “Even though they applied a large amount of water, the underside of the vehicle kept reigniting and would not go out.”

About an hour after firefighters got the fire out seemingly for good — a process that included spraying it with water for 45 minutes — a tow truck arrived.

While the Model X was being loaded onto the truck, it reignited again. Firefighters again put the blaze out, and the tow truck driver suffered minor burns.

The battery reignited again briefly while the SUV was being unloaded, but it only emitted smoke this time. 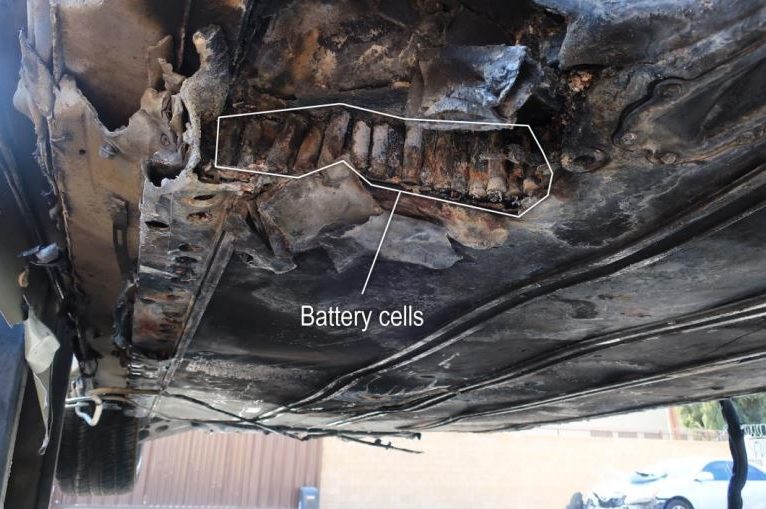 In another incident, a 2017 Tesla Model X crashed at 71 mph and caught fire the morning of March 23, 2018. Firefighters extinguished it fairly quickly, but the battery was deemed a safety risk and towed away.

“The (Tesla battery) engineers told NTSB investigators that they stressed the importance of leaving a 50-foot radius around the vehicle, as recommended by the manufacturer’s emergency response guide, but that there was not enough room in the yard, so workers did the best they could to separate the SUV from objects that appeared to be flammable,” the NTSB wrote.

Around eight hours after the crash, the battery reignited but went out on its own.

“According to the San Mateo Fire Department’s dispatch log, firefighters arrived at 7:09 p.m. and reported flames 8 to 12 inches high coming from the right front side of the SUV,” the NTSB wrote. Firefighters eventually extinguished the fire for good.

“The battery having reignited at least six times was evidence that it contained stranded energy, supported by the measurements of electric potential and the presence of intact cells,” the NTSB wrote.

A 2014 Tesla Model S crash May 8, 2018, at 116 mph left the car producing “heavy flames” and intense heat, a battalion chief reported, according to the NTSB. Firefighters got the blaze under control, and tow trucks were called.

At the tow yard — three hours after the collision — “the battery case and modules briefly arced and smoked” but the battery went out on its own, according to the NTSB. 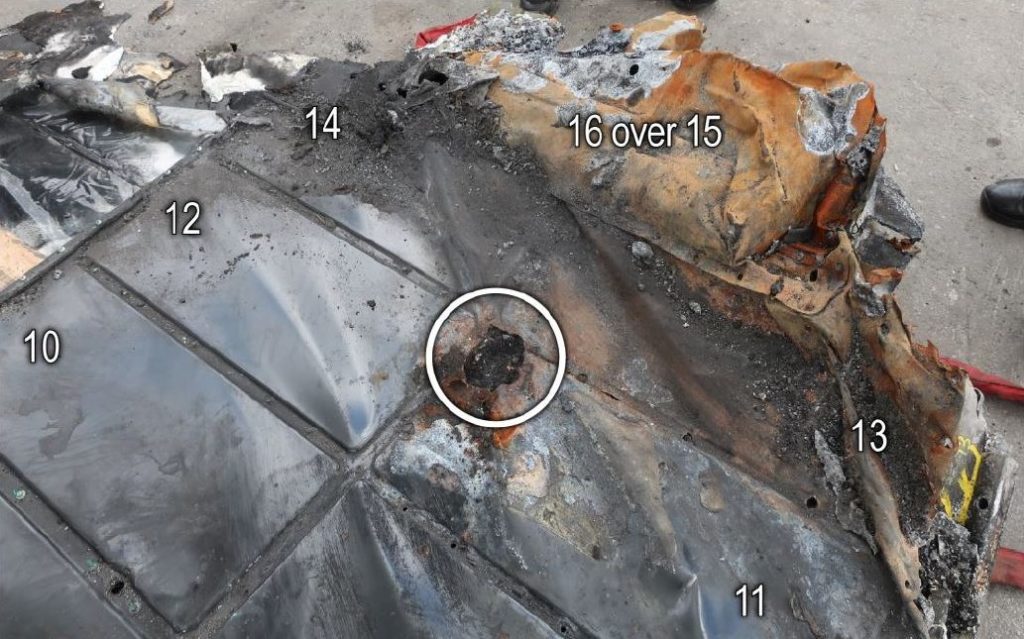 Despite these cases involving Teslas, the NTSB stressed that it wasn’t investigating Tesla vehicle design, merely lithium-ion battery fires. It mentioned similar incidents encountered by other agencies regarding other OEMs’ vehicles.

“As illustrated below, the high-voltage lithium-ion batteries in electric vehicles from other manufacturers have posed similar problems to emergency responders when the battery case or battery cells were damaged or failed internally,” the NTSB wrote.

These included crash-tested Chevrolet Volt batteries that caught fire, including one blaze that occurred three weeks after the test. The NTSB also described a BMW i3 that experienced thermal runaway after being pierced by a metal rod in a first responder training excercise, a Mitsubishi Outlander plug-in hybrid that caught fire in a crash and reignited while being winched onto a tow truck, and a BMW i8 dunked in a water bath after it began smoking in a dealership. (The NTSB couldn’t confirm whether i8’s battery actually was the cause of the fire.)

A hole burned through the battery pack of a 2014 Tesla Model S that crashed in Fort Lauderdale, Fla., and caught on fire. (Provided by National Transportation Safety Board)

A ruptured battery pack on a 2016 Tesla Model X which was damaged in a 2017 collision and had caught on fire. (Provided by National Transportation Safety Board)