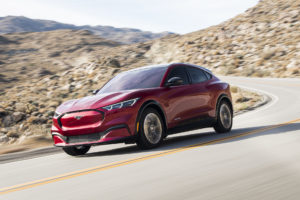 Based on Ford’s steel repairability matrix, such steels can carry repair restrictions, such as a ban on heat or even cold straightening. Boron and ultra-high-strength martensitic steels can’t even be sectioned, Ford says in the general matrix. (Obviously, check the actual Mach-E OEM repair procedures for the most accurate and complete story on what you can and can’t do to its metal. Bonanni said a great deal of information exists in Ford’s new model training and new workshop manual.)

The fender reinforcement tube is dual-phase 800 steel, while the front frame rails and fender apron assembly are DP 600, according to Bonnani. Fenders, the doors and hood are bolted and removable, he said. The roof panel reinforcements have DP 600 inserts, he said. (The roof itself can be upgraded to carry a special infrared coating and inner ultraviolet protection layer, Ford said in 2019.)

The body outer side panels are mild steel, as is the outer liftgate, according to Bonanni.

However, he said the rear frame rails are boron steel and “cannot be sectioned.” Shops can only replace them at factory joints, he said.

It appears Ford will throw at least one other substrate into the Mach-E mix besides steel and glass. The OEM’s Mach-E spec sheet describes the vehicle body as “Unitized mixed metal/composite.”

The Mach-E OEM Summit presentation discussed technological elements of the body beyond its materials.