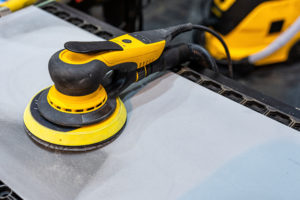 With the exception of State Farm, insurers still fail to frequently reimburse collision repairer charges for feather, prime and block, the latest “Who Pays for What?” survey found.

Only 39 percent of hundreds of responding shops reported eight major national insurers covered the refinishing operation “always” or “most of the time” on average when the repairers billed for it. But for State Farm, nearly 62 percent of the 614 shops encountered this level of consistency. The next closest of the seven remaining insurers was USAA at 42.4 percent, according to the study by CRASH Network and Collision Advice.

The overall 39 percent isn’t much better from the 35 percent the study found five years ago, particularly when one considers the margin of error was more than 3 percent in the survey years of 2016 and 2021. (And that margin involves situations with a greater respondent turnout than the 520-614 shops which answered for the various insurers in 2021.)

That’s a potential problem for customers, who ultimately are on the hook for any part of a repairer’s invoice the insurer refuses to cover. The inconsistency among the insurance industry also defies guidance from at least two information providers that feather, prime and block is “required.”

“Prime & block (high build / primer-filler) is a required procedure that restores a repaired panel surface, including the joined areas of replaced welded panels, from 150-grit finish to that of an NEW UNDAMAGED condition,” CCC writes in its MOTOR Guide to Estimating P-pages.

However, the study nevertheless provides proof to repairers and customers that the major insurers do cover this labor. A shop which bills for the work or a customer who’s reimbursed for it isn’t going to be the “only one,” according to the data. 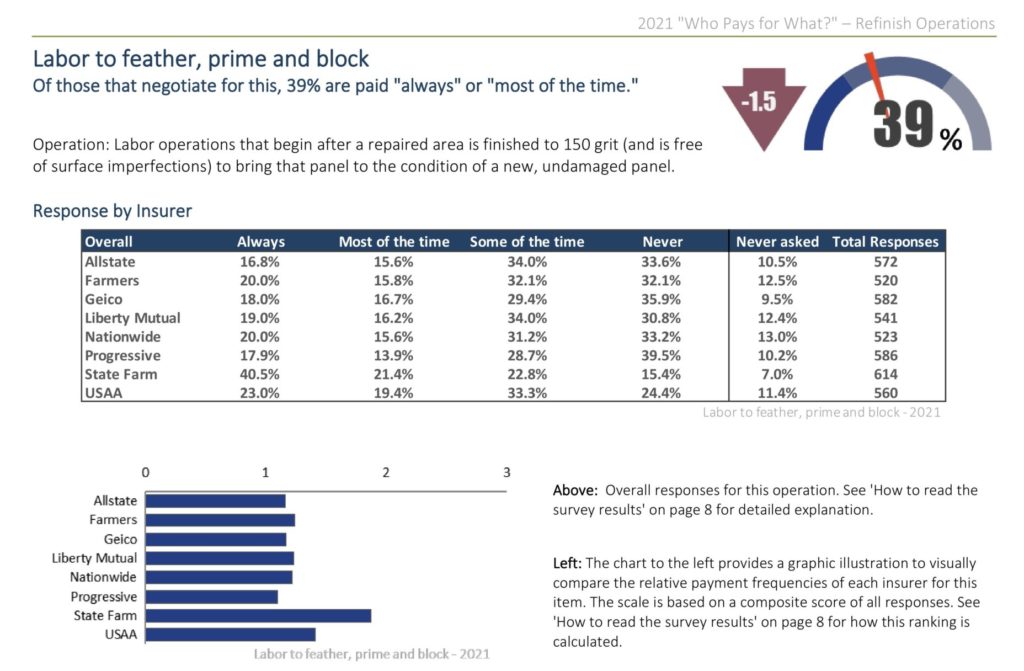 The work isn’t included in any of the estimating services’ labor times with the exception of Audatex’s times for welded replacement panels. However, Audatex doesn’t provide a material allowance in this time, according to its P-Pages.

Between 7 percent and 13 percent of the shops which participated in the study said they never billed a particular insurer’s claim for feather, prime and block. The “Who Pays” studies ask about eight of the nation’s largest carriers. (In 2016, between 10.3 percent and 17.8 percent of shops fell into the “Never asked” bucket.)

“All the estimating system refinish times are based on new, undamaged panels,” Collision Advice CEO Mike Anderson wrote in the 2021 study. “But repair work on a welded-on panel, for example, ends with the technician finishing it off at 150 grit. A panel finished with 150 grit is not the equivalent to new and undamaged. To get to that level requires finishing the repaired panel to 320 grit.

“The paint and abrasives manufacturers concur that you should not jump more than two grit-sizes. You can’t go from 150 right to 320 grit. It’s that process in between the two that’s essentially covered by this not-included labor time to feather, prime and block.

“… (T)he majority of shops say it’s their painters are doing this process. And if you look at the EPA 6H rule, priming can only be done by those meeting 6H qualifications, which generally means someone who has been through paint training.” (Though coatings changes have potentially made it easier for repairers to request a 6H exemption; find out more about that here.)

The recently released “Who Pays?” survey ran from Jan. 1-Jan. 31 and asked about a couple dozen operations, with a refinishing focus. Help the collision industry by taking the current “Who Pays for What?” survey by the end of the month and answering questions on topics including not-included body labor operations. All answers are kept confidential; data is published only in the aggregate.

Feather, prime and block involves taking a panel from 150 grit to a smoothness able to receive refinishing, according to the Database Enhancement Gateway. (Askolds/iStock)

A January 2021 “Who Pays for What?” survey found 39 percent of body shops reporting eight leading insurers “always” or “most of the time” reimbursed charges for feather, prime and block. However, for State Farm, more than 60 percent of shops reported that consistency. (Provided by Collision Advice and CRASH Network)