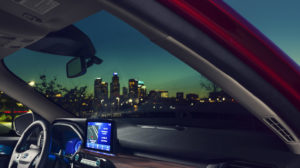 It’s a nice video auto body repair professionals can use to educate lay customers, who might respond well to the CNET or Roadshow brands. As of Thursday, the 12-minute segment on YouTube already had more than 20,600 views.

OEM procedures get a plug: Asked about the process of calibrating vehicles, Schulenburg said, “The processes are always gonna be specific to the vehicle manufacturer … and that make and model. …

“Our feedback to the industry is to always reference the OEM documented repair procedures each and every time that it’s performed.” He also notes that OEMs can update procedures, so shops should look them up the day that you’re performing the actual operation.”

Cooley also asked about the “right to repair” issue, but Schulenburg explained that independent body shops are already able to get procedures from OEM sites, noting as well the reliance automakers have on independent shops for collision repair.

Hopefully, all of that alerts viewers to ask their body shop about using proper procedures — and run for the hills from any one that isn’t.

OEM certification explained: Cooley also asked Schulenburg about OEM certified shops, observing that it feels like “marketing gloss.” Schulenburg calls it a sign of a shop’s training and equipment, and “it’s often more than just a marketing ploy.”

Fighting the tech shortage?: Schulenburg gets a plug for a career in the industry, describing the job as “very technical, very sophisticated work on highly advanced automobiles” and an opportunity for young people to use their skills. Hopefully, this gets the kids and their parents interested in the idea; a tech shortage continues to loom.

Insurers: The video makes a strong pitch for insurers and consumers to respect the process of fixing vehicle technology properly. Schulenburg observes that while the insurance industry demands such features (the IIHS, for example, requires some degree of autobraking to achieve Top Safety Pick+), carriers can be “behind the curve” in terms of understanding and underwriting for it.

Customers “have to pick a repair professional that they know are going to go through the necessary steps, regardless of … whether the insurance company recognizes it, to be able to put the consumer first, put safety first,” Schulenburg said.

And Cooley agrees. Insurers who advocate for safety tech “have to be willing to pay to repair them when that grille or windshield gets broken down the road,” he said. “You can’t just have one half of that.”

RDN: An associated print article posted Aug. 21 on CNET.com contains some nice links back to Repairer Driven News coverage. Not that we’re bragging or anything.

Featured image: A 2020 Ford Escape windshield is seen. It’s unclear if this model is one of the electrified versions or a standard gas powertrain. (Provided by Ford)