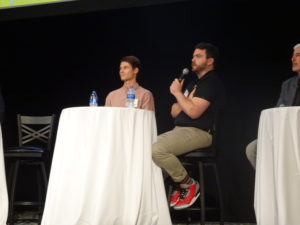 “We have extremely high-strength parts today,” he said.

But the existence of such impressive 3D printing doesn’t mean all parts created by additive manufacturing will behave the same way, based on comments by Würth Additive Group CEO A.J. Strandquist during the July 15 CIC Parts and Materials Committee session.

Strandquist said it was important to follow the “exact recipe” on how to create a specific part. A different method of printing a piece of carbon fiber could produce “unbelievable change” in its performance, he said.

He said that the 3D printing world also had “lower-rent units” which were “popping out parts,” ostensibly from industrial 3D printers but lacking the same performance.

“There’s a difference, right?” he said.

RE3DTECH director of engineering Peter Kootstra said additive manufacturing can be thought of as 2D printing over and over again, one layer at a time. But each layer contains a “whole set of parameters” like infill and border passes, and the process can get complicated quickly, he said.

Koostra said his company works under a process where a customer can take the production file for the validated 3D-printed object and run it through the same type of printer with the same parameters and receive the same part.

Strandquist proposed a “frozen file” containing this “recipe,” one which can’t be printed using a different material and orientation.

There’s a difference between a 3D-printed production part with a consistent level of quality and the uncertainty of running the same file through “Billy’s 3D Printing Shack,” Strandquist said.

The best bet would be to find a quality provider with certification, he said. “They’re few and far between,” he said. Wurth only buys parts from five companies, he said.

Kootstra offered the example of the 3D-printed replacement tabs created by Creative Repair Solutions and validated by CAPA after a “three-plus-year process.” He described the parts as receiving OEM-level plastic testing prior to approval and being approved by a standardized organization.

3D printing carries the challenge of “repeatable quality,” Kootstra said. How can one determine that the entire production run was suitable for use?

Strandquist said that as a supplier taking requests for serial production, Würth was becoming more “antsy” on its demands for lot control and inspection reports. He described a closed-loop quality inspection report containing data like hardware and printing success as an ideal scenario.

Kootstra also suggested “traceability” could help weed out legitimate 3D printed parts from counterfeit ones, using technology like blockchain to confirm a component came through proper channels.  He also noted such tracking could extend to a part’s life cycle, such as a piece of tooling containing an RFID chip keeping tabs on its usage and time until replacement.