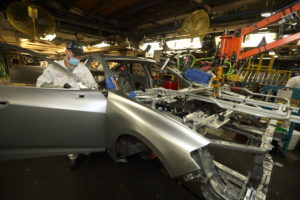 Honda developed a unique architecture for the next-generation 2021 Acura TLX which concentrated on rigidity for the suspension but enough flexibility to accommodate the three powertrain versions, according to Honda body design principal design engineer Jeremy Lucas.

For the first time in the history of the TL and TLX, the 2021 Acura TLX’s platform didn’t share commonalities with other Acuras, Lucas said. This was the only way Acura could achieve the 2021 TLX’s performance targets, he said.

Lucas said Honda’s original plan involved a “single body for everything” but found this carried too much of a weight and cost penalty. Instead, repairers will see three different configurations with “minor” differences. 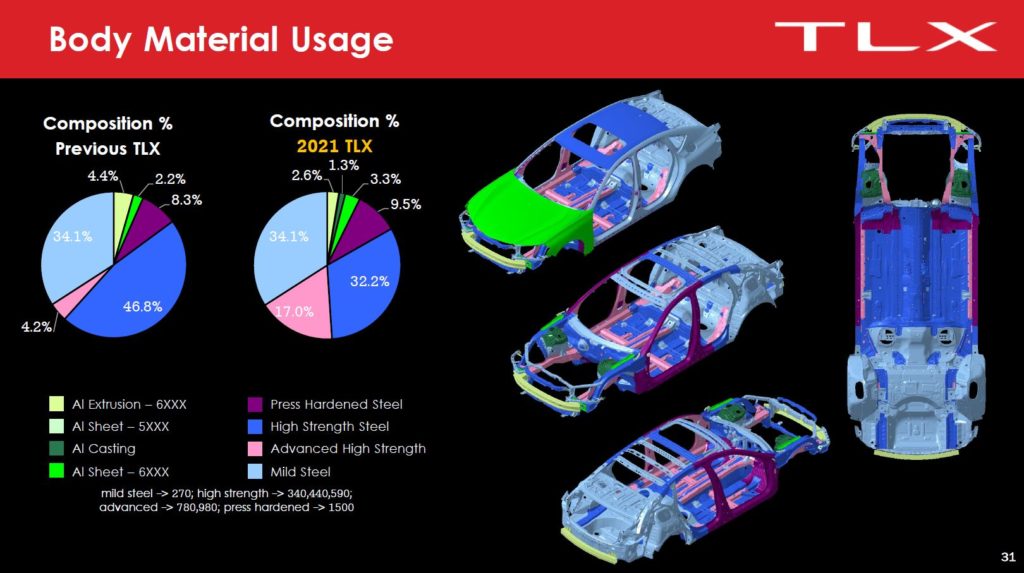 Some elements will be familiar from the prior-generation 2015-2020 TLX, according to Lucas. Acura will continue to use an ultra-high-strength steel “door ring” and magnesium instrument panel beam, he said. It will also apply spray foam at the factory for “excellent NVH,” he said.

Honda cut back the concentration high-strength steel, which it defines as steel between 340-590 megapascals, in favor of advanced high-strength steel of 780-980 MPa strengths. The latter makes up 17 percent of the 2021 TLX’s body, up from 4.2 percent on the prior-generation TLX, and includes what Lucas described as a new “high-formability” dual-phase 980 MPa steel found in the side frames.

Press-hardened steel of 1,500 MPa or more grew from 8.3 percent of the body to 9.5 percent; Lucas said this growth stemmed from the addition of 1,500 MPa steel to the lower dash/kickout area.

Repairers will also encounter an aluminum hood, aluminum fenders and aluminum front and rear bumper beams. The hood and bumper beams were already aluminum on the outgoing 2015-2020 TLX, but the fenders weren’t. 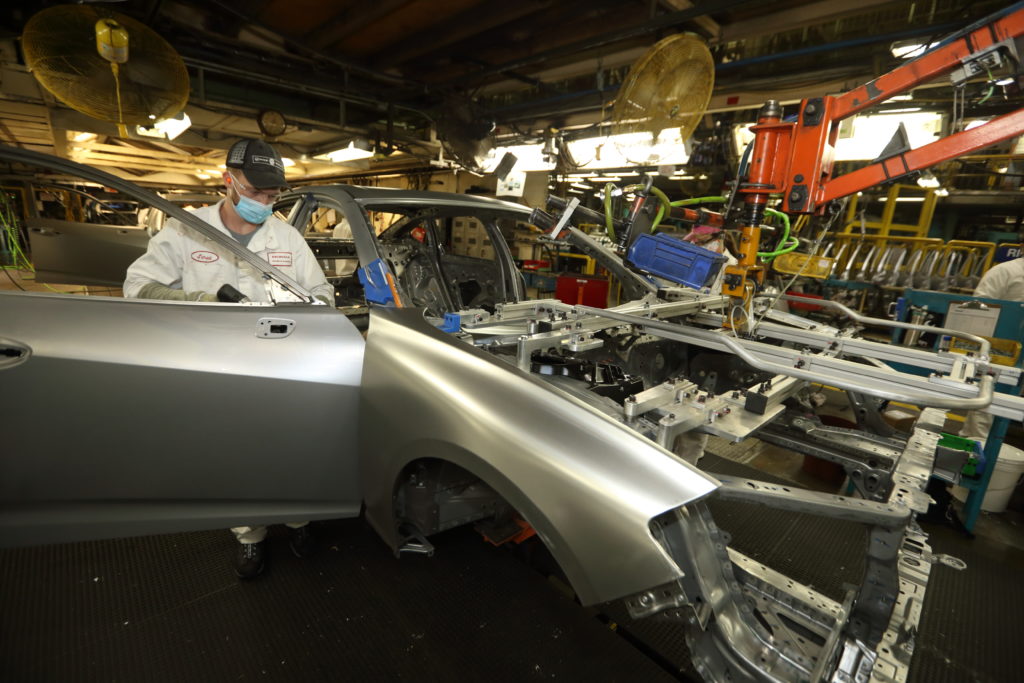 This feature and the rest of the engine compartment will be common across all three TLX powertrains, with the exception of components tied to radiator packaging or body rigidity.

Repairers should also take note that Acura now is treating the front subframe as a load path for a crash. Lucas said that previously, the OEM only cared about the part detaching. 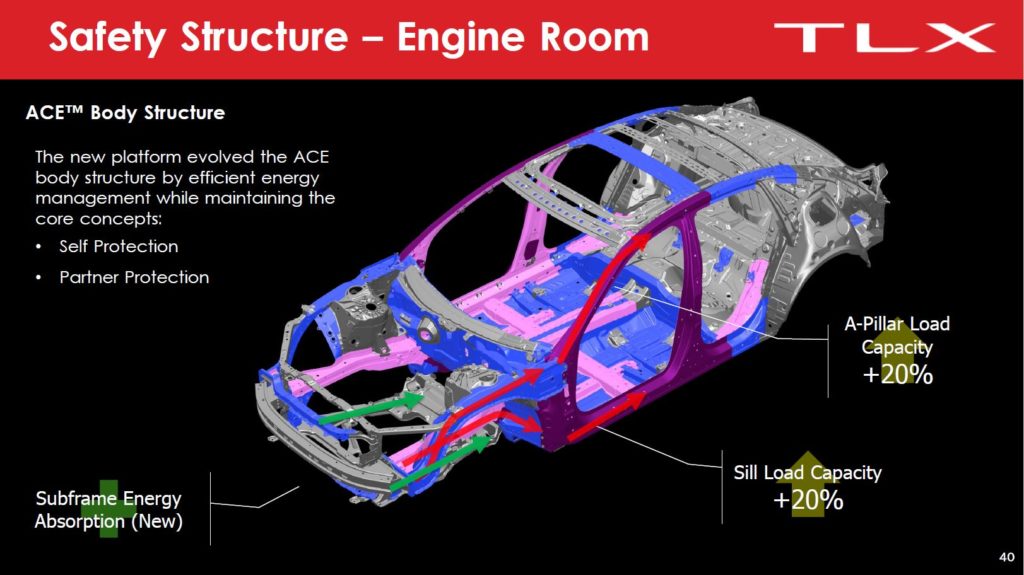 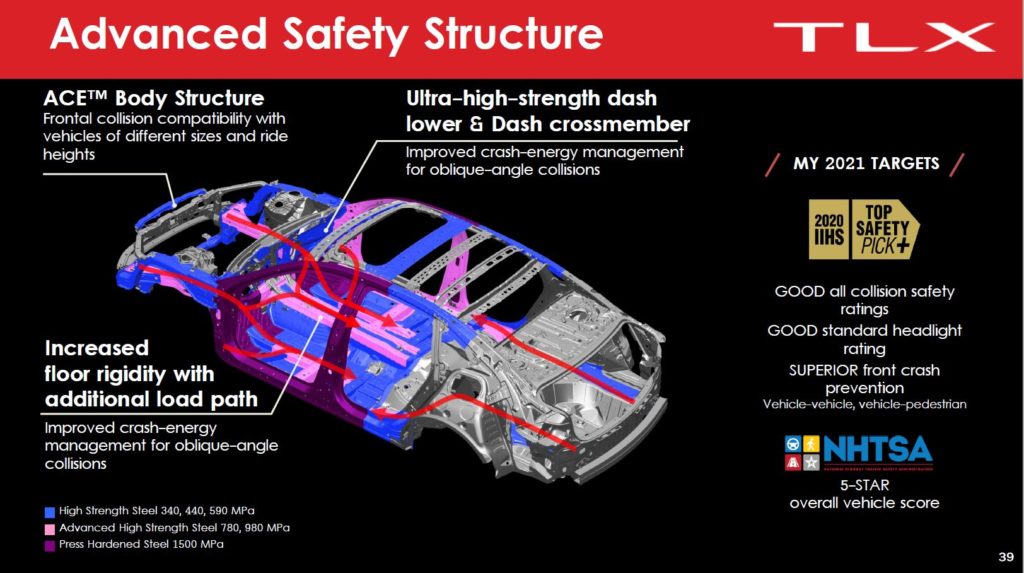 “We’re taking advantage of this load path,” he said. He showed a video demonstrating a stationary TLX struck by another vehicle going 55.92 mph at a 15 percent angle with 35-percent front-end overlap. He called this an example of a front oblique crash test.

“Notice the lack of intrusion into the cabin area,” Lucas said.

Moving backwards, a new 980- to 1,500-megapascal cross-car load path stands at the base of the kickout panel. It’s perpendicular to a high-rigidity center tunnel which will appear in all three TLX configurations, Lucas said.

The base of the vehicle carries multiple load paths so that Acura has more control and dispersion of the energy, according to Lucas. The OEM also boosted lateral support between the rear frame rails for greater rigidity, he said.

Repairers will also note bolt-on bracing on the bottom of all three TLXs, which Lucas called the “most efficient way” to add rigidity. These include two bolt-on components bracing the center tunnel and two angled ones connecting the midfloor crossmember to the rear frame rails. The straight-line braces line up with crossmembers in the vehicle’s floor, creating a “complete cross-car load path,” Lucas said. 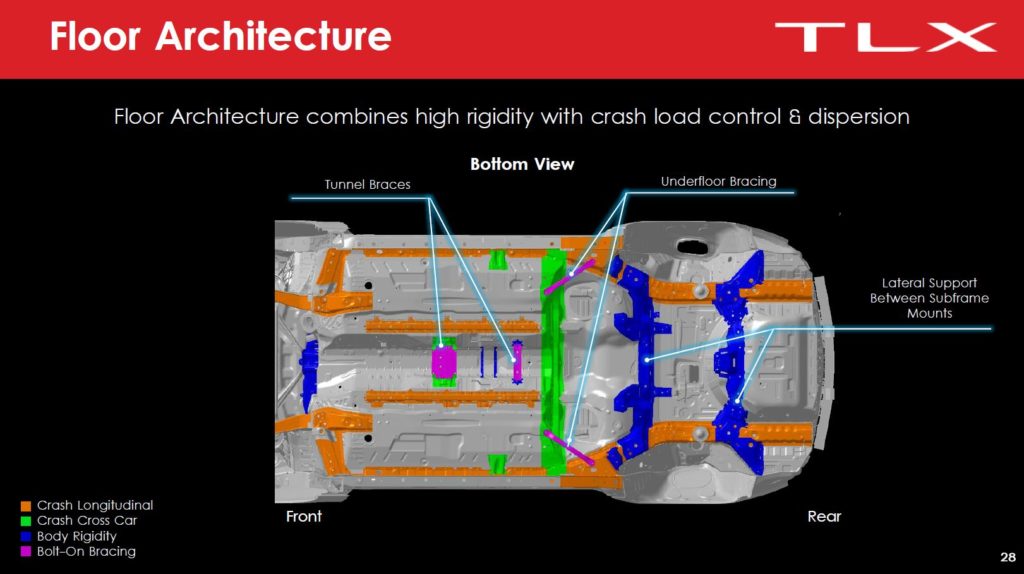 Acura adds even more bolt-on bracing to the all-wheel drive TLX. This includes braces connecting the front of the rear frame rail to the rear lateral support and an aluminum extrusion brace between the TLX’s exhaust and the transmission prop shaft, according to Lucas’ presentation. 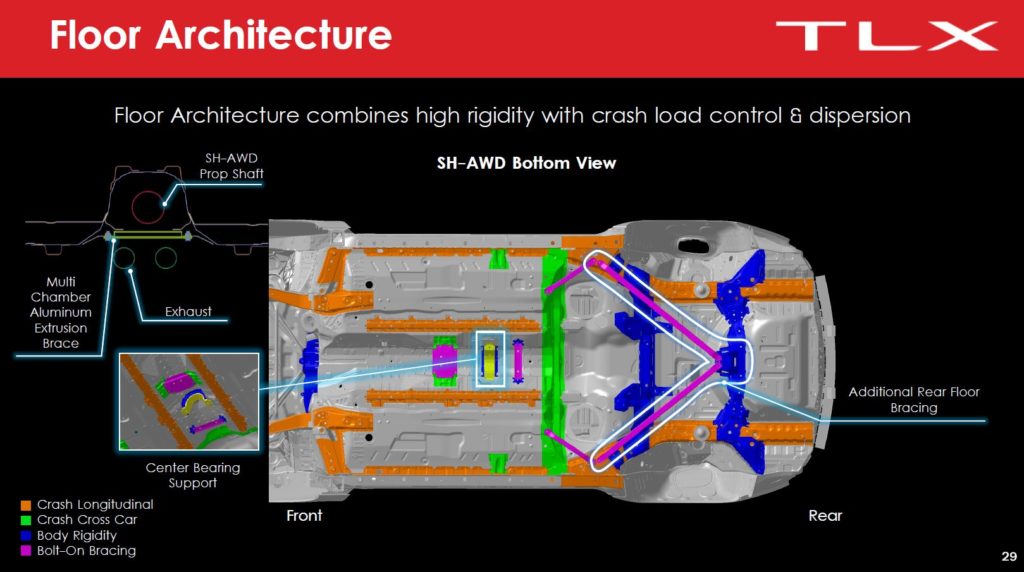 The Type S included a unique reinforcement within the midfloor crossmember for rigidity’s sake, according to the presentation. 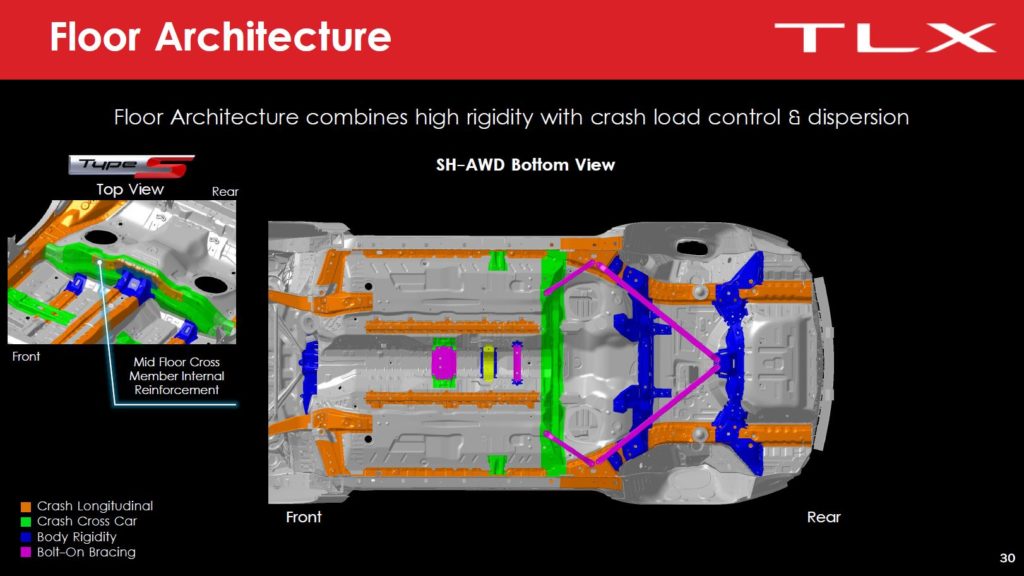 Honda had a challenge of keeping the customer’s perception of rigidity constant between the three TLX formats despite the increasing weight, according to Lucas. Using a single specification for all three bodies would have reduced the rigidity feel at each successive weight, “which would be very odd for the customer,” according to Lucas. 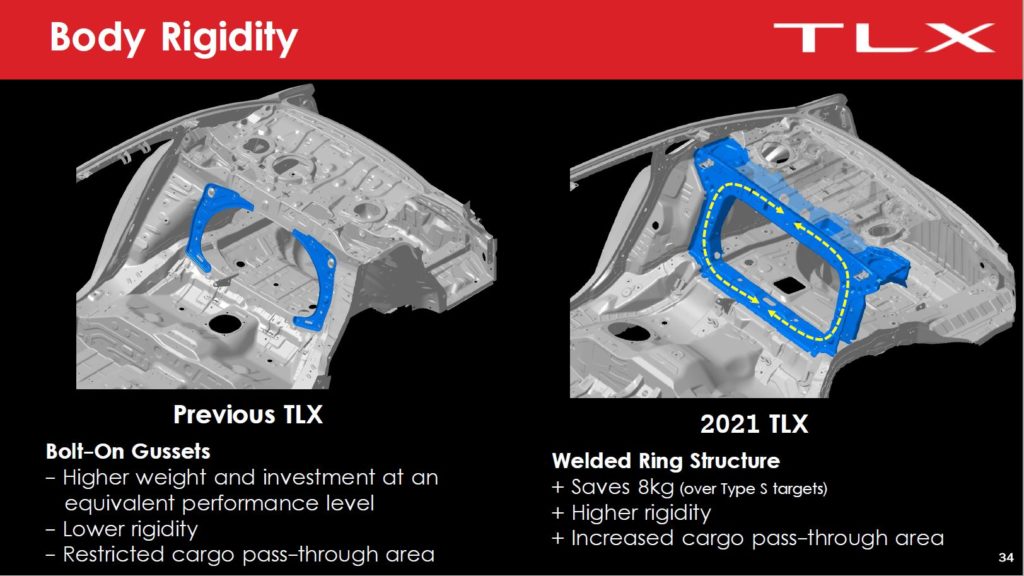 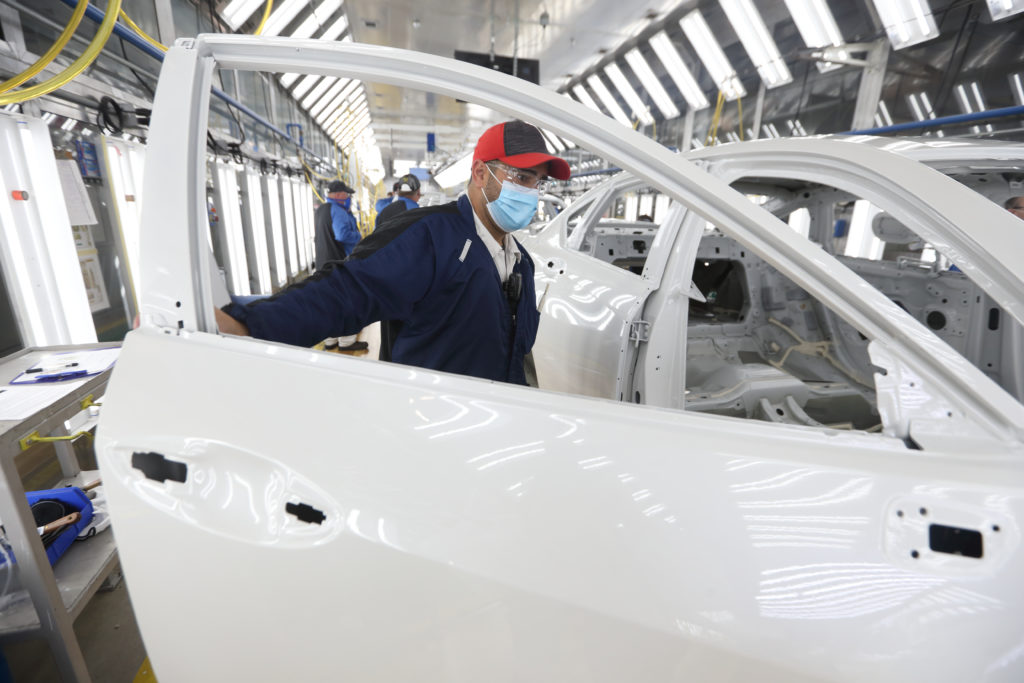 Some rigidity measures will stand across all three versions. Acura discarded bolt-on gussets around the cargo pass-through area in favor of a welded ring in the C-pillar area, saving 17.64 pounds, over the Type S target mass, according to a slide.

This led to spikes in numerous rigidity metrics, reaching above 100 percent improvement in some cases.

The OEM also improved rigidity across all models by incorporating 95.14 feet of structural adhesive, an Acura record, according to Lucas.

Moderator John Catterall, vice president of the American Iron and Steel Institute, said he felt structural adhesive was an industry trend, and Lucas called it “really hard to beat” on a cost-performance basis.

The Type S needed “very few” additional parts for rigidity compared to the normal all-wheel drive version, according to Lucas, who shared the following slide. 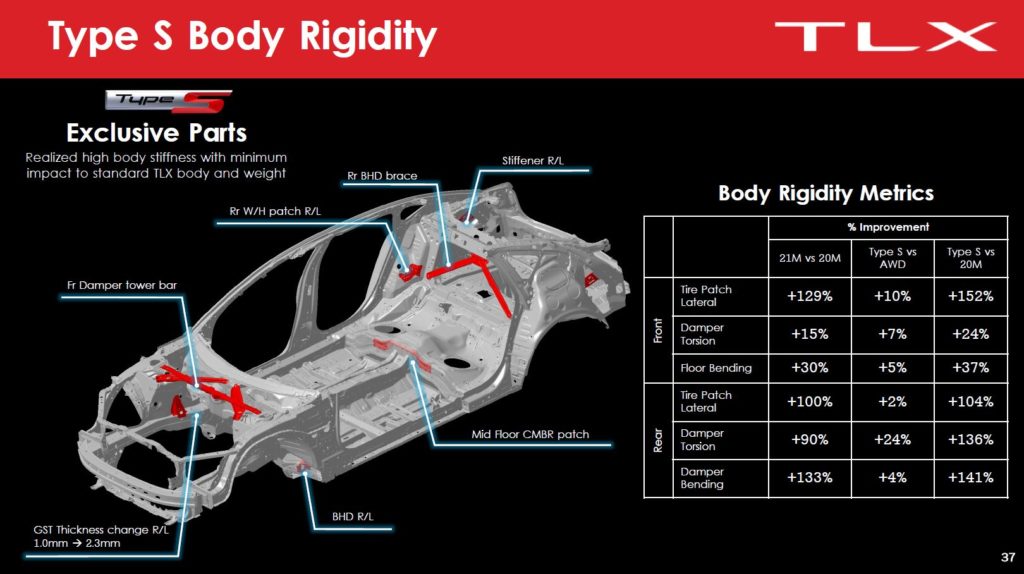 Jared Bennett works on a 2021 Acura TLX at the Marysville, Ohio, Auto Plant. (Provided by Acura)

Steel and aluminum proportions on the 2021 Acura TLX. (Honda slide provided by Great Designs in Steel)

Acura discarded bolt-on gussets around the cargo pass-through area in favor of a welded ring in the C-pillar area for the 2021 Acura TLX. (Honda slide provided by Great Designs in Steel)