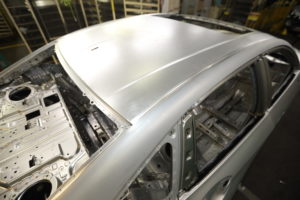 In addition to discussing the structural performance and design of the vehicle, Honda recently delved into the joining which went into its next-generation 2021 Acura TLX.

Even if the repair procedures for the auto aftermarket do differ from the factory joining — you probably don’t have a laser brazing robot on hand — the discussion during the May 19 Great Designs in Steel still might offer repairers insight into trends related to both.

In at one case, the presentation by Honda body design principal design engineer Jeremy Lucas offers a lesson on corrosion protection diligence.

The roof has been laser-brazed onto the body, which Lucas said offers an “appearance improvement.”

“This new process joins the roof to the body side panels, creating a clean, seamless exterior appearance with no need for a garnish over the rain channels,” Acura wrote in August 2020.

The technology uses a two-beam system, with the first laser preheating the steel and removing the galvanic layer, while the second beam melts the copper alloy used in the joining, according to Lucas. The 9.5 feet (2.9 meters) of laser brazing can be completed in 44 seconds, he said. 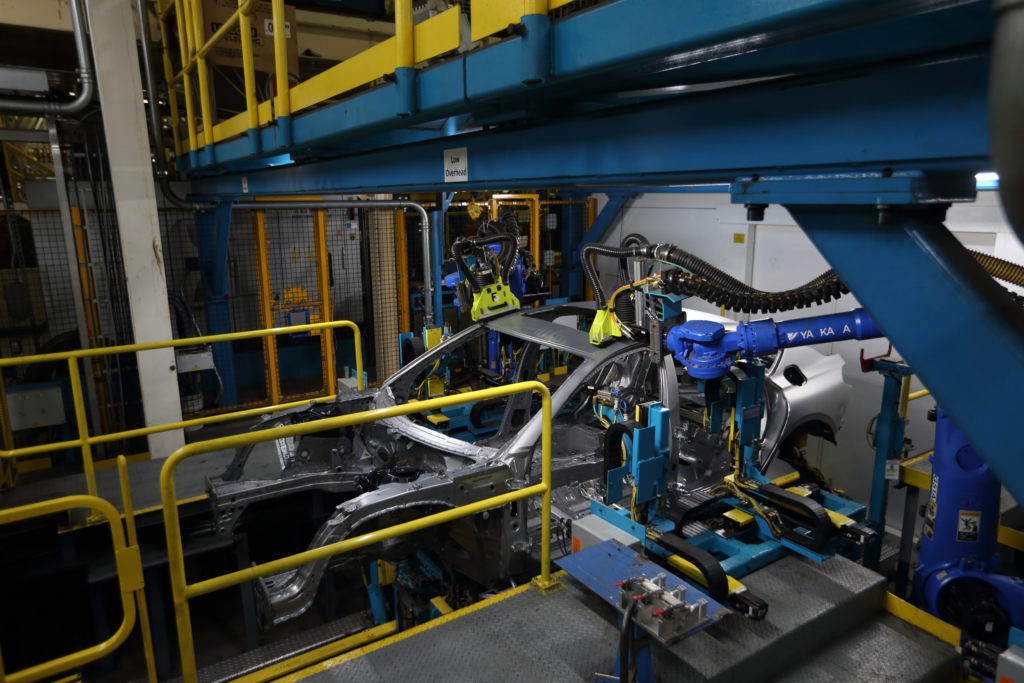 Besides the aesthetic benefit, the laser-brazing creates a structural joint that offers the body a durability improvement, according to Lucas.

Such roof laser brazing could be a trend for repairers to watch. General Motors told the Great Designs in Steel audience earlier that day it too had opted for laser-brazing the roof of the 2021 Chevrolet Trailblazer. The aesthetics and savings on molding meant GM would come out ahead over the life of the architecture, an engineer said.

Lucas said Honda’s cost-benefit analysis of laser-brazing the roof had been conducted prior to starting the TLX project, and he wasn’t involved in the decision. The introduction of the joining technique came at the same time as a factory changeover, he observed.

Lucas said he thought the savings from Honda’s perspective came in terms of production efficiency.

The OEM adopted a multilayer defense against galvanic corrosion, he said. 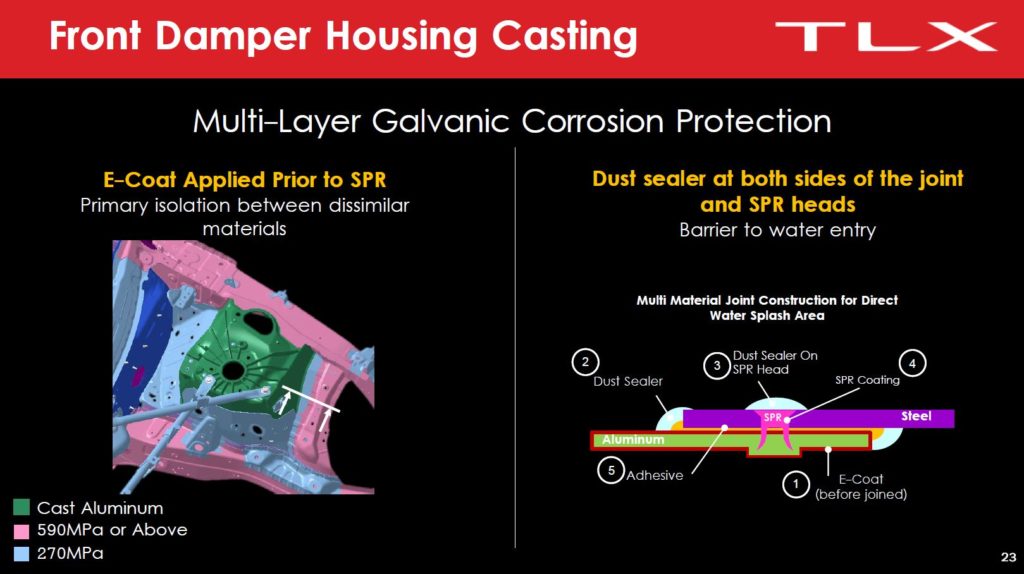 “We e-coat the panels before they are joined,” he said. After e-coat and paint in the factory, Honda applies dust sealer on both edges of the aluminum-to-steel joint, on the self-piecing rivet head and on the body of the self-piercing rivet itself, according to Acura. 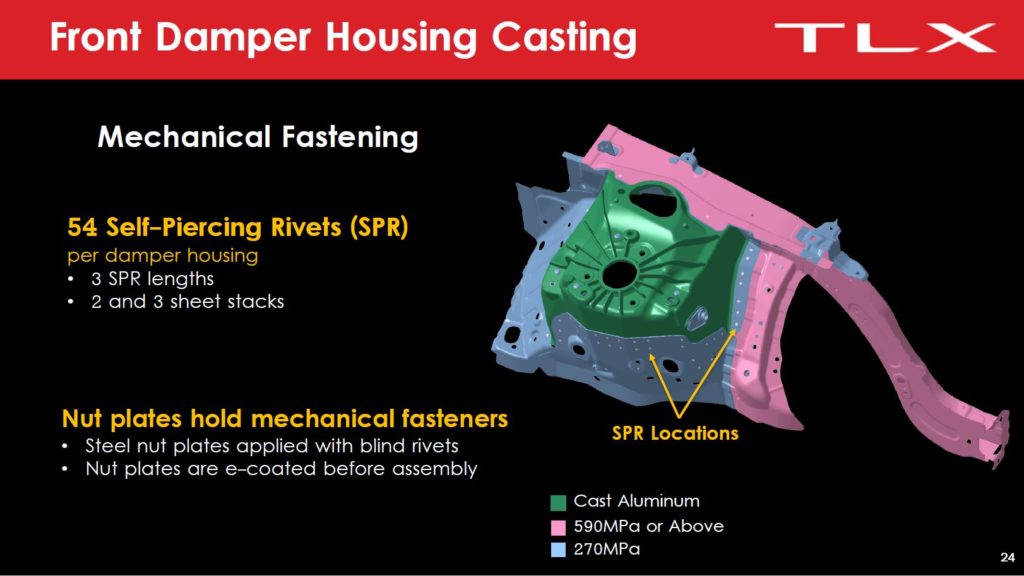 The OEM also adopted “nut plates” in high-torque areas. These are e-coated before installation and have a “pilot feature” allowing nut self-centering within the casting holes.

“This is key for the accuracy that we need,” Lucas said. The rivets follow after that. 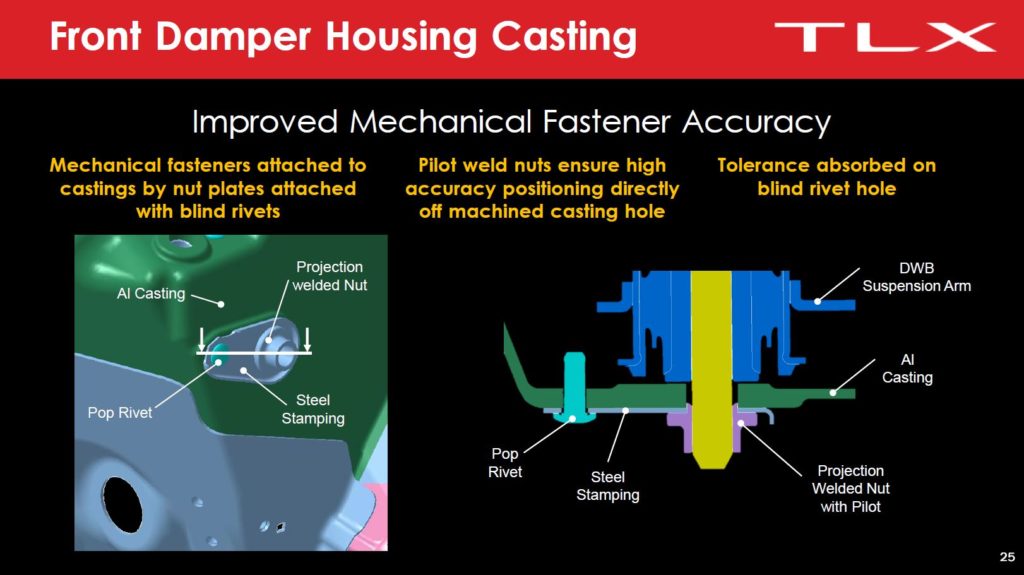 The aluminum is e-coated prior to the joining; the steel only carries normal galvanneal coating, according to Lucas. After the self-piercing riveting, the whole thing goes to e-coated. Lucas called it a “belt and suspenders” method of corrosion protection.

“We’re being extra cautious” since the TLX will represent the first of such aluminum applications at high volume, Lucas said.

He acknowledged that Honda’s standards might be “a little bit higher” compared to other OEMs.

“We didn’t want to rely on that for providing the sealing,” Lucas said.

Moderator John Catterall, vice president of the American Iron and Steel Institute, noted that adhesive manufacturers can be hesitant to call their products sealants despite the corrosion protection sealing their application also provides.

“It certainly can do that,” Lucas agreed. But he said the OEM could use designated sealants with a higher expansion ratio if it wanted to seal something. The glue here was “strictly a structural adhesive application,” Lucas said.

Overall, Acura incorporated 95.14 feet of structural adhesive throughout the TLX body, which Lucas called a record for the OEM.

Catterall said he felt structural adhesive was a trend, and Lucas called it “really hard to beat” on a cost-performance basis. 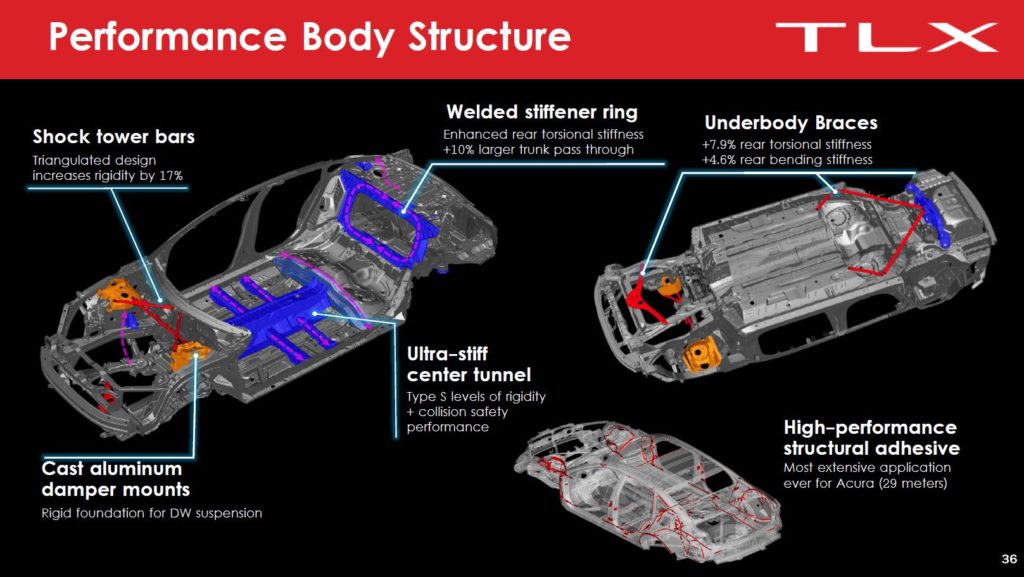 Another notable joining element seemed to be the use of multiple bolt-on body reinforcements for rigidity or bracing, with additional bolt-on arising appearing as motorists upgraded to the Super-Handling All-Wheel Drive trim and then the Type S all-wheel drive format.

Lucas said bolt-on parts represented a “very direct approach” for applying rigidity in a desired direction. It also allowed Acura to “have a difference very quickly, very easily” between the two configurations.

It also represented the only realistic option for reinforcing a unibody center tunnel for perpendicular loads if one planned to install the exhaust and transmission prop shaft first, Lucas said. You could attempt a unibody solution and add additional weight and cost, or you could just bolt on a reinforcement after the fact, according to Lucas.

Catterall observed that some engineers view bolt-on reinforcements as inelegant even though they work. Lucas said Acura didn’t use them on any visible component, except to reinforce the shock towers in the engine compartment. But that’s a common, accepted practice, he said.

The laser-brazed roof on a 2021 Acura TLX at the Marysville, Ohio, Auto Plant. (Provided by Acura)

Rigidity measures which might be found in the 2021 Acura TLX, though not all might be on the base TLX. (Honda slide provided by Great Designs in Steel)