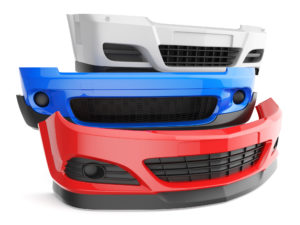 The Society of Collision Repair Specialists (SCRS) on August 10 formally announced its opposition to the federally proposed “Save Money on Auto Repair Transportation (SMART) Act, the latest attempt to reduce the length of time that OEM exterior parts would be protected from competition through design patents.

The SMART Act, proposed by Congressman Darrell Issa (CA-50), is similar to bills introduced regularly as far back as 2007 that have “targeted automaker patents on vehicle part designs in hopes of promoting cheaper imitation parts earlier in the vehicle lifecycle,” SCRS said in a written statement.

“The small businesses we represent want to perform safe and proper repairs, that allow us to place our customers and their families back into a repaired vehicle with confidence that it will continue to provide the safety they expected from it, prior to their collision,” SCRS’s position statement reads. “Parts selection is a critical part of a safe and proper repair, and collision repair businesses have simply learned through first-hand experience that reverse engineered imitation parts are not the same as parts made and distributed by the OEM.”

The SMART Act seeks to amend title 35 of the United States Code, to provide an exception from infringement for certain component parts of motor vehicles. It would shorten the length of design patents that prevent other companies from producing replacement crash parts from 14 years to just 30 months. Proponents, including insurers and the alternative parts industry, suggest that limiting the length of some automaker design patents would allow consumers to benefit from more competition for replacement parts.

“Analysis of very similar proposals had previously left [members of Congress] skeptical of the merits of cutting patent rights for a single industry,” SCRS Chairman Bruce Halcro said in a written statement. “In fact, the hearings over substantially similar proposals established that it would take a major leap of faith to assume that allowing aftermarket manufacturers to copy OEM collision replacement parts sooner would actually yield savings from insurers that would actually be passed on to consumers.”

“(I)t negates the perceived benefit of using a cheaper part, not to mention raises concerns over whether those parts would have restored the safety and value of the consumer’s vehicle,” Schulenberg said.

Issa previously has introduced similar legislative efforts to limit automaker patents. Most recently, he introduced the “Promoting Automotive Repair, Trade, and Sales (Parts) Act” in 2017 in the 115th Congress. It was backed by the “Quality Parts Coalition,” which included insurance companies, LKQ Corp., and other manufacturers and distributors of non-OEM parts.

A similar group of organizations – including Allstate, CAPA, Diamond Standard, American Property Casualty Insurance Association and the Automotive Body Parts Association –  has more recently formed the “CAR Coalition” (www.CarCoalition) to support efforts in this Congress to pass the SMART Act.

Data from CCC Intelligent Services shows significant growth in the use of alternative parts in collision claims over the past two decades. 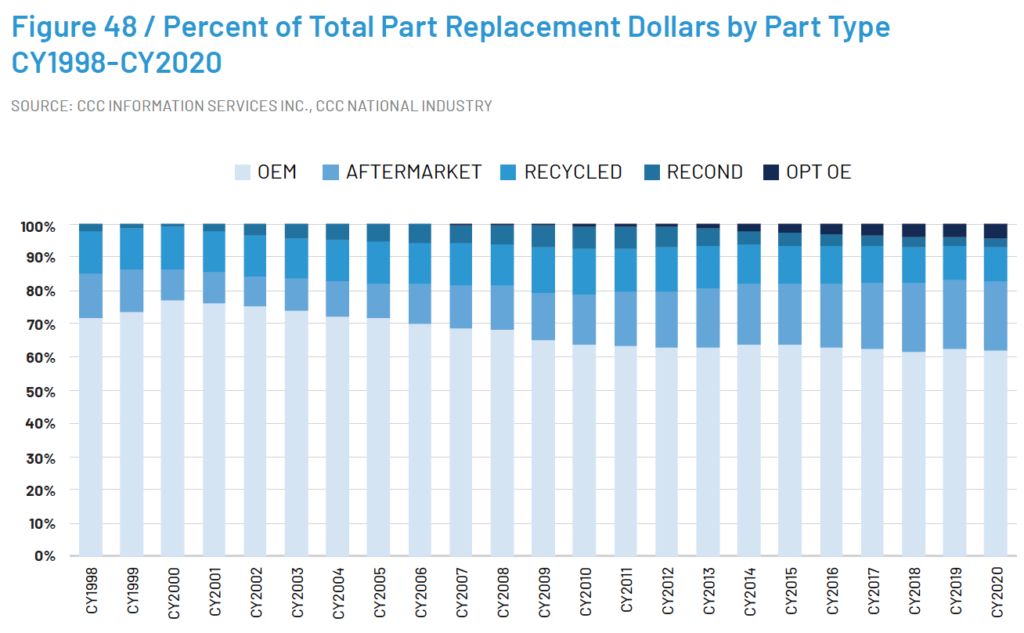 Despite this, the CAR Coalition argues OEM patent protection should be slashed from 14 years to 2.5 years because the current term “prevents aftermarket manufacturers from making or selling external collision repair parts, which drives up repair costs by limiting consumer choice, crowding out competition, and leading to higher insurance rates and fees.”

They also note that the SMART Act would allow the non-OEM parts industry to “research, develop, make, and test parts on a not-for-sale basis during the new patent period.”

(Grassetto/iStock)
CCC’s 2021 “Crash Course” shows that new OEM parts now account for less than 62% of the total parts claims dollars, down from nearly 69% two decades ago. (Provided by CCC)