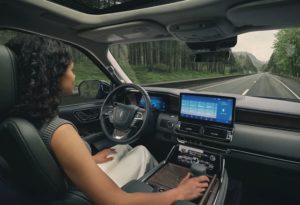 An ever-growing list of new car models that will soon offer hands-free driving features over the next 12 months makes it all the more likely that more repairers will soon be working on these high-tech systems. And the new crash reporting requirement announced this summer by the National Highway Traffic Safety Administration (NHTSA) means it also may be more likely that prior collision repair work may come under scrutiny should one of these vehicles end up in a subsequent collision while driving hands-free.

Lincoln just announced that, beginning in early 2022, it too will join the list of nameplates offering hands-free driving at highway speeds. Lincoln “ActiveGlide” will be available on the new Lincoln Navigator scheduled to reach showrooms early in 2022. The system uses camera and radar systems to enable hands-free steering on selected highways that Lincoln calls “Hands-Free Blue Zones.” When active, the system will automatically steer, brake and accelerate to stay between the painted lines and maintain a preset distance behind the cars ahead. Lincoln says it will have pre-mapped about 130,000 miles of highways in North America when the vehicle launches.

Ford will begin offering its new BlueCruise hands-free highway driving system to customers later this year after 500,000 miles of development testing and fine-tuning the technology on a journey across the United States and Canada. A map of the Blue Zone highways where Lincoln ActiveGlide will be permitted to function hands-free. (Provided by Ford)

Lincoln’s parent, Ford, announced earlier that it would be offering the Ford-branded version of hands-free driving technology, dubbed “BlueCruise,” even sooner than Lincoln – before the end of 2021. According to Ford, the technology will be introduced via a software update on existing 2021 Mustang Mach-E and 2021 F-150 models.

Also before the end of this calendar year, Lexus said its hands-free system called “Teammate” will be offered in the U.S. on the 2022 Lexus LS500h. According to an early review by Car and Driver, the first iteration of Teammate uses a suite of eight cameras and five radars, plus a laser, to gather information about its surroundings. There are three forward-facing camera packages: a stereo camera to calculate distance, a mono camera to look for lane markers, and a telescopic lens that looks to the horizon for other vehicles. There are also four panoramic cameras on the sides to scan for lane markers. The eighth camera is mounted in the cabin to monitor the driver.

Like GM’s already existing “Super Cruise,” available on only a few select models, the Lexus, Ford and Lincoln systems are not fully autonomous driving technology. They are classified as SAE “Level 2” advanced driver assistance systems that still require the driver’s attention, and are exactly the kind of systems on which NHTSA now requires mandatory crash reporting.

NHTSA in June ordered automakers to report to the agency all crashes that occur while a “Level 2” system is engaged.

“NHTSA’s core mission is safety. By mandating crash reporting, the agency will have access to critical data that will help quickly identify safety issues that could emerge in these automated systems,” NHTSA acting Administrator Steven Cliff said at the time of the announcement.

“Access to [this] data may show whether there are common patterns in driverless vehicle crashes or systematic problems in operation,” the agency wrote. “NHTSA may take further actions on any individual crash, including sending a Special Crash Investigations team and requiring the company to provide additional information.”

Hands-free highway driving isn’t the only new SAE Level 2 feature that Lincoln will release on the new Navigator. The SUV will also offer “Intersection Assist” to alert a driver attempting to turn left by applying the brakes when the camera and radar technology detect oncoming traffic. The new model will also offer the increasingly more common features such as parking assist, forward collision warning, post collision braking, and pedestrian detection.

A demonstration of Lincoln ActiveGlide hands-free driving in the 2022 Navigator. (Provided by Ford)

A map of the Blue Zone highways where Lincoln ActiveGlide will be permitted to function hands-free. (Provided by Ford)